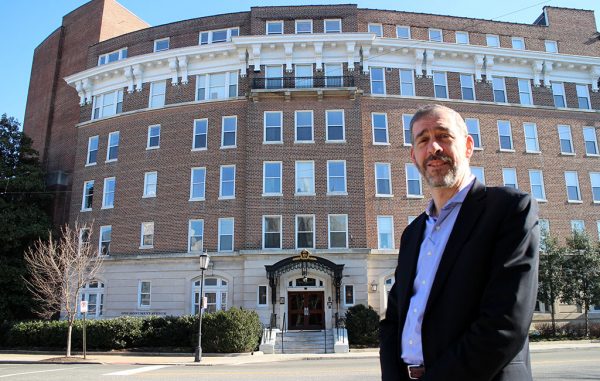 Raphael Cohen in front of the One Monument Avenue building on Stuart Circle. (Jonathan Spiers)

A New York developer is making an eight-figure first impression in Richmond with the purchase of a Stuart Circle apartment building he plans to convert condos.

The One Monument Avenue complex at 421 Stuart Circle sold Friday for $12.05 million to an entity tied to New York-based Arcadian Cap Group, Monumental RE and Urban Generation Living, a firm led by Raphael Cohen.

Cohen said Thursday he plans to convert the 60,000-square-foot residential portion of the mixed-use complex from apartments to condos, with prices ranging from $300,000 to $650,000. An office portion of the complex – converted from the former Stuart Circle Hospital – will remain with its current tenants’ leases honored.

As part of the deal, the office portion, totaling 30,000 square feet across three floors, was sold to Water Tower Associates III LLC, an entity tied to Stuart Cantor of Glen Allen-based TrustMor Mortgage Co. That LLC paid $2.9 million for the office portion and $700,000 for a nearby parking deck at 410 Stuart Circle that serves the complex.

Cohen said he was alerted to the property by Cantor, who arranged financing for the deal from Virginia Credit Union. The six-story complex, which had been listed for sale in 2015, was purchased off-market, Cohen said.

City property records list the seller as One Monument Avenue LLC, which purchased the 1-acre property in 2002 for $11 million. The seller in that deal, Laurel Hill Associates LLC, also owned the four-story parking deck and maintained ownership of that half-acre property until last week’s transaction.

The latest city assessment valued One Monument Avenue at $11.69 million.

Cohen, who worked five years with New York real estate firm The Durst Organization, said he identified Richmond as a market he wanted to enter after going out on his own and starting his firm.

“It’s a great market,” Cohen said of Richmond. “It offers opportunities that other cities do not offer. It’s a vibrant economy where real estate can be acquired at a less-expensive cost than other cities.”

Cohen said he was involved in the development of One World Trade Center while at Durst and has worked on more than $1 billion worth of residential development.

“I love going down Monument Avenue,” he said. “I think it’s one of the most beautiful avenues in the country. Urban settings are something that I value.”

The building’s 34 apartments will be converted into 37 condos ranging in size from 1,500 to 2,300 square feet. Units range from two to four bedrooms and include at least two bathrooms.

Cohen said renovations would start right away to update the complex’s common areas, which are being redesigned by Richmond designer Janie Molster. Plans also call for freshening up the exterior of the building with new paint and landscaping and updating amenities such as a fitness room, two courtyards and a fourth-floor terrace overlooking Stuart Circle.

The building’s doorman service will continue with the conversion, and CBRE | Richmond will continue to manage the property. CBRE will also handle the renovations to the residential units.

Cohen would not say how much he’s putting into the renovations, which he expects to take three to four months to complete. Existing residents are being given options to buy units, and Cohen said leases will continue to be honored, with residents renting the condos until their lease terms expire.

Joyner Fine Properties’ David Feibish and Lacy Williams are marketing the units, all but two of which are occupied. Those vacant units will be used as models for the condos. The office portion is likewise mostly occupied, with 4,000 square feet of the 30,000 total currently vacant.

Broker Martin Blum from Colliers International represented the buyer, along with his colleague Bruce Milam.

With his first deal done, Cohen said he’s eyeing other real estate opportunities in Richmond and other markets, with One Monument Avenue serving as a calling card.

“Our vision for this building is this should be the premier condo property in Richmond, in the Fan District,” he said. “No other property has the amenities that this building has.”

The deal adds to other signs of investment around Stuart Circle specifically. Across the roundabout, a six-story, 105-unit apartment building is planned behind St. John’s United Church of Christ.

Note: This story has been updated to include New York-based firm Monument RE as part of the LLC that purchased One Monument Avenue.

Martin Blum and I were pleased to have brought the property to the attention of Cohen and Cantor and to have represented them in the purchase. Martin did the yeomans work during the last 10 months of the contract due diligence period. It’s been a long haul to the finish line but this beautiful building will enjoy a rejuvenation of life as a condo conversion.

I would love to see someone buy the Stuart Court Apartments and raze the structure and build new or completely gut and renovate it that building has been an eye sore in Stuart Circle for a long while.

So the new condo residents will not have access to or will have to pay separately for parking? Or will spaces still be dedicated to the housing units?