Cream Studio and Barber Martin Agency teamed up to create a spot for Virginia Lottery’s Jewel 7s Playbook. The motion-designed spot shows gemstones, metallics and textures representing different scratch games in each book, with sound by Overcoast. Released this month, the 30-second spot received airtime during the Winter Olympics and will run through spring.

The King Agency completed a web video for Virginia VINE, part of the national VINE victim notification network. The video will be used in a digital ad campaign that will also include radio, out-of-home advertising and print collateral.

The Martin Agency created an animated video for Land O’Lakes encouraging viewers to “spread the love.” The video was released on Valentine’s Day and features illustrations by Martin designer Patricia Morales.

Randall Branding Agency is working with C&F Bank on a communications audit and refining the bank’s brand messaging and visuals. The agency also launched a new website for Continental Underwriters and is updating marketing materials to match the site. 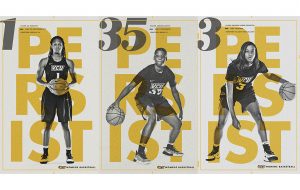 Brandcenter students developed a brand campaign for VCU Women’s Basketball. Called “Persist,” the campaign was developed from interviews with players and staff and includes flyers, posters and social media

The campaign is being worked into the team’s current season and will be fully rolled out next season. Students involved in the project included Coryn Bajema, Martin Madriaga, Sara Singh and Kate Ursu.

Think was hired by Virginia Council of CEOs to roll out a campaign called “One Great CEO.” Work for the campaign, which will highlight local CEOs, will include photography, illustration and digital distribution. Think was hired by D.C.-based Tabard Properties to redesign its logo, and it is working with TFB Agency on a business identity package for GoFor20, a locally based exercise and nutrition program.

Elevation completed a brand refresh for Lewis Ginter Botanical Garden. The agency, which designed the garden’s conservatory logo in 2003, developed a wordmark of the garden’s name and illustrations that can be used in combination. Work also included a 44-page brand standards document. The brand will be implemented in the garden’s “A Million Blooms” spring advertising campaign.

Evergib launched a branding campaign for Startup Virginia, a local business incubator. Work included brand strategy, messaging, logo, visual identity, website design and marketing materials. The launch was timed with the opening of the 1717 Innovation Center that will house the nonprofit.

Locally produced documentary “Blackbird: Legacy of Innovation” will air on WCVE and WHTJ on March 1 at 9 p.m. The film, on the history of the SR-71 jet, was produced by Fuel Creative’s Todd and Pam Hervey.