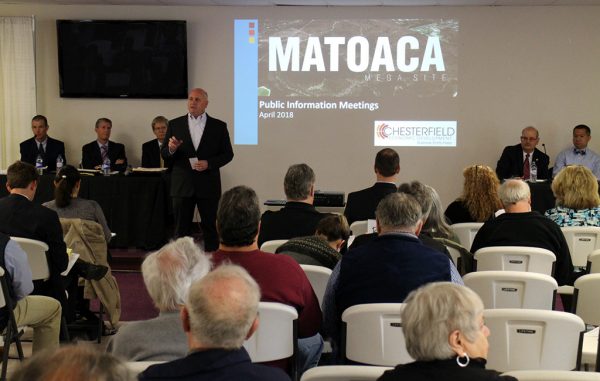 About 100 people attended the meeting at Second Baptist Church in Chester. (Jonathan Spiers)

Chesterfield County residents are weighing in on the latest plans for a proposed industrial megasite that proponents are betting would lure a major employer to the region.

A series of community meetings kicked off this week to present the project to the public and solicit feedback. Several residents who spoke Wednesday morning voiced opposition to the county economic development authority’s plan to rezone the 1,700-acre tract southwest of Chester as the so-called “Matoaca Mega Site.”

The EDA is expecting the site will attract an auto manufacturer or other advanced manufacturing company that could create thousands of jobs and add more than $1 billion to the local economy. Proponents say the project would have significantly less impact on roads and other infrastructure than the residential use currently allowed for the property, which was previously zoned for a 5,000-home mixed-use development that never materialized.

Speakers who voiced opposition to the project said homeowners bought into the area expecting it to stay residential, if not rural. Some cited traffic impacts that they said resulted from Amazon’s distribution center in Meadowville Technology Park, and others asked why a megasite is needed when land is available in that park and the James River Industrial Center, where the Shandong Tranlin Paper Co. factory had been planned.

Some speakers expressed skepticism that the megasite would be worth the estimated $200 million the EDA says it would cost to develop the site and build a facility. Those costs would be funded by a mix of federal, state, local and private funds.

Todd Haymore of law firm Hunton Andrews Kurth, who presented the project on behalf of the EDA and consulting firm Timmons Group, told the roughly 100 attendees at Wednesday’s meeting that the advanced manufacturers the EDA is targeting require a minimum of 1,500 acres. The Tranlin site, at 800 acres, would fall short.

The rest of the 1,700-acre megasite would be developed for complementary uses that would supplement the main facility, such as offices, hotels or training centers.

Haymore, a state commerce and trade secretary under Gov. Terry McAuliffe, stressed that only clean, low-emission and environmentally friendly users would be eligible for the site. Once developed, the EDA expects to create about 3,000 direct jobs with salaries averaging $70,000, $5.5 million to $11 million annually in net revenue to the county, and about $6 billion in total economic output.

A series of community meetings kicked off this week. (Jonathan Spiers)

Haymore said the site is considered attractive to potential users not only for its size but also its proximity to an available workforce – a point that Highlands resident Jeff Siffert reiterated in his comments.

Allen Wilson, another speaker, questioned whether other options for a megasite exist and should be considered. He said he purchased his home and put money into upgrades not expecting it could be near an industrial megasite.

“Yes, this area checks all the boxes,” he said. “I think there are other sites in this area that may also check the boxes.”

Mike Uzel, who spoke on behalf of citizens group Bermuda Advocates for Responsible Development, questioned Haymore’s current involvement with the project in light of the Tranlin deal that has left the state on the hook for a $5 million grant.

Haymore responded that he doesn’t consider the Tranlin deal dead, noting the company maintains some operations near Charlottesville. He said the deal also has set in motion legislative reforms aimed at preventing such a scenario.

An earlier round of community meetings was held last fall, when the megasite proposal was first pitched to the public. Those initial plans have been updated with more details as part of the EDA’s rezoning application, which it finalized and submitted to the county last month.

Two more meetings in this latest round are scheduled before the county planning commission considers the EDA’s request. The commission has scheduled a work session April 17 and could consider the request at its May 15 meeting, when the first of two public hearings would be held. County supervisors would hold a second hearing before deciding the request, potentially at their June 27 meeting.

Gib Sloan, who represents the Bermuda District on the planning commission, stressed that comments received in the meetings would carry weight as the process plays out.

“These meetings do matter,” he said. “This is not a done deal.”

The remaining meetings will be held April 16 and May 7 from 6:30 to 10 p.m. in the Carver Middle School auditorium. 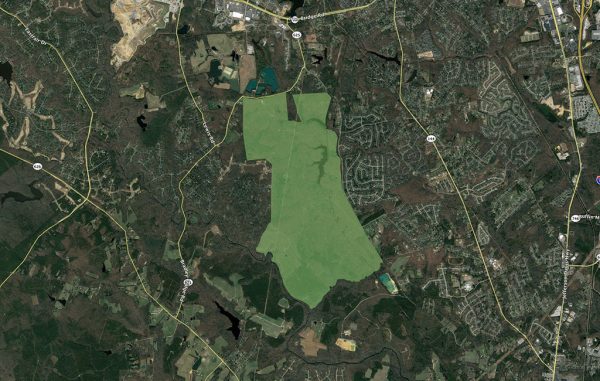 Map of the 1,675-acre tract proposed for the megasite. (Chesterfield County)

To residents of Chesterfield who do not live in the affected area: please do not disregard this simply because it is not close to you. What happens in one area of the county has ripples that will affect all of us. Setting this precedent, would give Dorothy Jaeckle and friends carte blanche to start plopping heavy industrial factories in your backyard. They would give their constituents clogged roads, noisy factories, and air/ground pollution simply because they see dollar signs. They dropped the ball with Tranlin, and that was with a buyer with a plan. Now they’re asking us to trust… Read more »