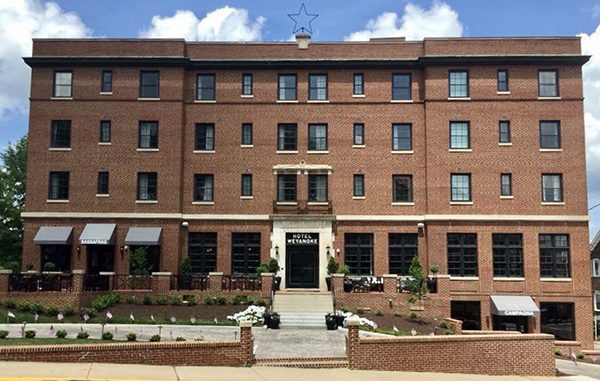 Two local developers who historically have targeted multifamily projects in Central and Southwest Virginia are embarking on a new path with the opening of their first hotel.

They’ve invested about $12 million to overhaul the property, which was built as a hotel in the 1920s and – when they bought it five years ago from a private owner for $950,000 – had been used most recently as student housing.

“We kept the use for a couple of years, because at the time we didn’t know what to do with the property,” Fickenscher said of the student housing. “We knew that the existing use was unsustainable given the age of the facility and the type of tenants that resided in the building.”

Hotel Weyanoke was one of the largest, most opulent hotel and conference center complexes between Richmond and Winston-Salem, North Carolina, at the time of its construction.

Named for the Native American tribe that originally settled the area, Hotel Weyanoke hosted several politicians, celebrities and events, including an annual Lion Club Convention in the late 1920s that featured author and activist Helen Keller. A picture of Keller’s visit remains on display in the hotel.

“There was a lot of pride in getting the hotel constructed,” Fickenscher said. “When it opened, there was a 2,500-person parade – one of the town’s biggest at the time – to welcome it into the business community.” 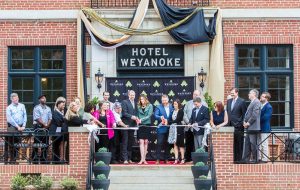 Searching for another use of the property, Fickenscher and Shifflett were approached in 2015 by Williamsburg-based Cornerstone Hospitality.

“They came to us with the idea of converting it back into a hotel, which we knew was its original and most historic use,” Fickenscher said.

“But it was something we never thought about doing ourselves until they approached us.”

The two met with several community stakeholders and businesses, including the Longwood University Real Estate Foundation, which has played a pivotal role in redeveloping downtown Farmville properties near its campus.

Looking to build on its historical past, the development duo spent the next three years carving out a plan to rehab and expand Hotel Weyanoke.

After 18 months of construction fueled by historic tax credits and private financing, the hotel today boasts 70 rooms, including 27 in the original structure, with the remaining balance in a newly constructed wing.

“We really wanted to make this a destination,” Shifflett said. “It had to blend into the fabric of the community, and all of the history the area has to offer.”

John Shideler, the former general manager for the Williamsburg Inn, will serve as Hotel Weyanoke’s general manager. Chef Frank Paris, formerly of the Primland Resort in southwestern Virginia, along with Farmville-area native Sydney Motameni will oversee the restaurants.

Farmville and the surrounding Prince Edward County has caught the attention of several hoteliers in the vicinity.

Outside of downtown Farmville, Tru by Hilton hotel opened a 106-room facility on South Main Street – central Virginia’s first – about a year ago; followed by a 96-room Holiday Inn Express nearby.

Shifflett said tourism, events and growth at Longwood University and Hampden-Sydney College are driving demand for hotel rooms in the area.

“Besides what’s out near (U.S. 460), there are not many options in Farmville,” he said. “That’s what made this such a good investment for us, and took so long to plan because we wanted to make it more than just a place for an overnight stay.”