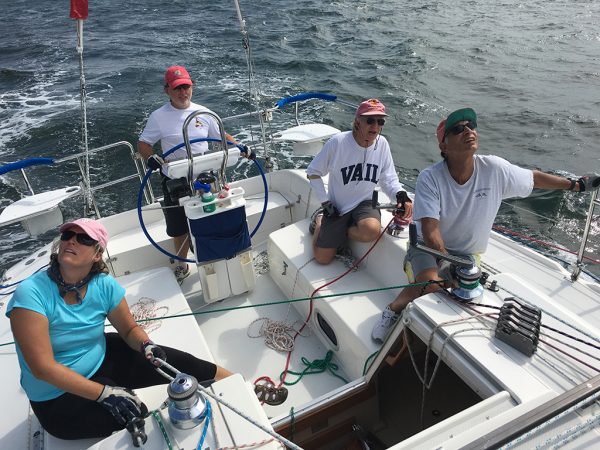 Rick Peterson’s love of sailing and being on the water has helped chart the course of his life more than once.

The co-owner and principal of Cornerstone Architects did a four-year stint in the Navy because of it, taking the Midwest native to the West Coast and San Diego. There, he met an architect while in college, leading him to pursue what’s become a 40-year career in the field.

It led Peterson to Richmond after he finished school in Texas, drawn by the blue of the Chesapeake Bay on a map.

And when he retires in two or three years as planned, it’ll be the water of the bay and Rappahannock River that’ll provide the 67-year-old’s retirement plan: “to live by the water and cruise the bay,” he said. 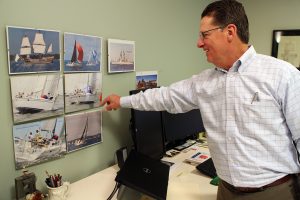 Peterson with photos of his sailing adventures in his office downtown. (Jonathan Spiers)

Since co-founding Cornerstone in 1991, Peterson has kept up the sailing habit he picked up from his father, an “avid sailor” who raced competitively and helped his son get his sea legs.

When he’s not drafting designs and leading the firm he founded with Richard Morse and Jonathan Kucera, Peterson spends his weekends in warmer months sailing competitively and for pleasure in the waters around Deltaville, where he owns one boat, shares ownership in another and helps crew friends’ boats in and around the mouth of the Rappahannock.

Peterson said he competes in more than 30 races a year, typically working the bow and handling the spinnaker sail.

While the scenery is different and the locations miles away, Peterson said the pursuit is not so far removed from the pencils and drafting table of his day job. It also helps that his office is adorned with photos and his brother’s drawings of various vessels. A nautical bell hanging outside the door is rung whenever Cornerstone lands new business, he said.

“The sport is interesting because it attracts engineers and architects and physicians. It is a technical sport, and that’s what has always been my interest in it,” he said.

“Anybody can get in a motorboat and turn a key and it’s like driving a car, but to sail on a sailboat, you have to have knowledge of the wind and the rules of navigation and aerodynamics and the boat-handling tools. It’s kind of a puzzle, and for me, that’s a fun way to relax.”

Peterson owns a Flying Dutchman, a 20-foot wooden racing dinghy that he plans to race competitively for the first time this year. He restored the mahogany boat himself, putting his other love, woodworking, to work. 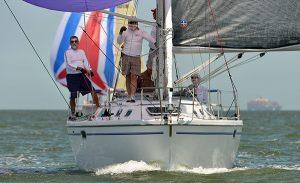 Peterson, center, on his favorite spot of a boat.

He also shares ownership in an S2 7.9, a 27-foot, stripped-down pocket cruiser racing boat. And he crews on a friend’s Flying Scot, a 19-foot racing dinghy, and on a Catalina 320 that last week competed in a 25-mile channel race from Deltaville to the Eastern Shore and back.

“You’re always trying to improve your boat speed and boat-handling abilities, and one way to test that is in a competitive environment, racing against other people,” he said. “No two days are the same.”

Peterson said some of his most exciting times racing have been while flying the spinnaker, the three-cornered sail used to catch wind off the bow. Other favorite sailing memories include chartering a boat in the British Virgin Islands.

“Because you’re on the boat for a week at a time, it’s a little bit more like camping,” Peterson said of his time in the islands. “You’ve got to think about provisioning and fuel and water levels. There’s a little more planning and a little more total immersion in sailing, because basically you’re living on the boat.”

Not in it just for himself, Peterson also spends time sharing what he knows in crew-training classes and programs offered by Fishing Bay Yacht Club, the Deltaville club where his boats are kept. He encourages anyone interested in picking up the sport to sign up for a class – and to not let any preconceptions get in their way.

“There’s a misconception that sailing is an elite sport only for people who have money, but there are a lot of people who are members of the club and are avid sailors who sail and race competitively in small boats that don’t cost a lot of money to get involved in,” he said.