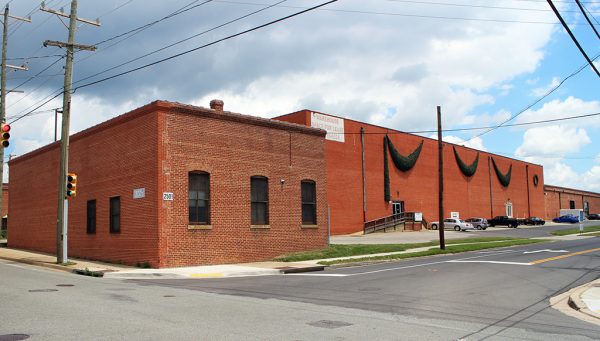 The expansion of The Cooperage would push into the complex’s two remaining buildings at the corner of Overbrook and Hermitage roads. (Jonathan Spiers)

The apartment conversion of a warehouse three football fields long on Overbrook Road appears headed for its second and final phase – with a restaurant component added to the mix.

Louis Salomonsky and David White of Historic Housing have filed plans with the city for a continuation of The Cooperage, their apartment conversion of a century-old tobacco warehouse across Overbrook from Hardywood Park Craft Brewery and near The Diamond.

In addition to 55 more apartments, bringing the total count to 172, plans include converting a detached, 2,300-square-foot structure at the corner of Overbrook and Hermitage Road for use as a restaurant, Salomonsky said.

“We’re talking with some people about putting a diner in it,” he said. “I think across the street there used to be a diner called Stockyard Diner, so we were going to create the Stockyard Diner there. It may not happen, but we’re working on it.”

Salomonsky would not say who he’s talking to about the restaurant concept, but he maintained there would be a market to support it.

“There’s large employment in the area, so there should be a large breakfast and lunch business in the area,” he said. “We hope to also hook up with Hardywood with some association with the diner, and that should lead to some ideas for evening dining.”

The westernmost end of the warehouse building, currently a showroom and storage for Commonwealth Business Furniture, would be turned into 55 one-bedroom apartments, about half of which would rent at a higher rate – $1,600 a month, Salomonsky said – than the 117 completed units that fill the rest of the building.

The other 27 or so of the new apartments would rent lower, at about $1,000 a month. Salomonsky said the rents would include utilities, internet, cable TV and trash pickup.

The new section would include atrium-style courtyards – what Salomonsky described as “industrialized hacienda-style” – similar to those in the completed section.

The open-air courtyards are intended to provide more light to units within the structure, the south wall of which is windowless. The developers originally planned to cut windows into that wall, but changed plans to keep the project eligible for historic preservation tax credits.

Completed last year, the 117 apartments that make up The Cooperage’s first phase consist of one- and two-bedroom units ranging in size from about 700 to 1,200 square feet, with monthly rents ranging from $1,000 to $1,600.

Salomonsky said those units rented quickly and are fully occupied.

The project would require an amendment to an existing special-use permit on the property. Salomonsky and White have submitted an application for that amendment through their Historic Family Investments LLC.

An initial SUP was amended in 2016 to allow for the apartments. White said at the time that the westernmost part of the building would be developed for commercial use, as city planning commission members had said the space could not be filled with more apartments – as the initial proposal called for – without an amendment to the permit or other approval from the city.

Should this latest amendment go forward, Salomonsky said he would like to start construction around Thanksgiving. Salomonsky’s SWA Architects is designing the project.

Commonwealth Business Furniture would relocate from its space, which totals about 40,000 square feet. Owner John Michael Jochim said he’s working with an agent to find a comparable space in town.

In addition to The Cooperage, Salomonsky and White are proceeding with other developments such as Scott’s View, a pair of seven-story residential towers under construction in Scott’s Addition. Other area projects have included the Todd Lofts apartments on Hermitage Road and the 1 Scott’s Addition apartments on Norfolk Street.