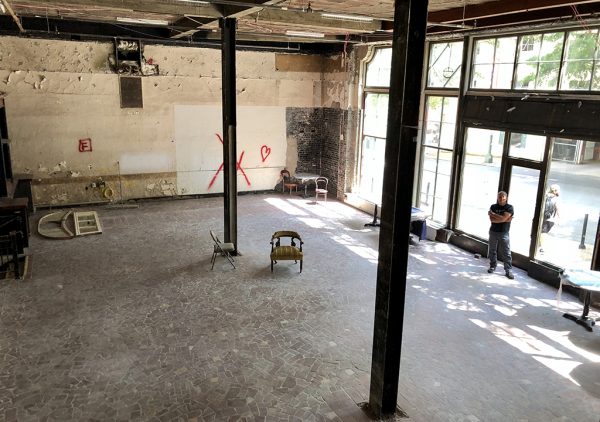 The front area of the 508 E. Franklin St. will be transformed into a grand lobby area where mini-golf patrons will begin their game. (J. Elias O’Neal)

The owners of a downtown Richmond pool hall are lining up their next shot around the corner.

Jim Gottier, and his wife Andrea Ball, who opened Greenleaf’s Pool Room four years ago on the ground floor of the Residences at the John Marshall, are planning an indoor mini-golf venture elsewhere in the same building at 508 E. Franklin St.

Dubbed Hotel Greene, the venue will take shape in 7,000 square feet of space the couple is leasing.

“It’s highfalutin’ mini-golf,” Gottier said during a tour of the space Monday afternoon. “We think it’s a concept that’s going to be received well by people who visit and live downtown.” 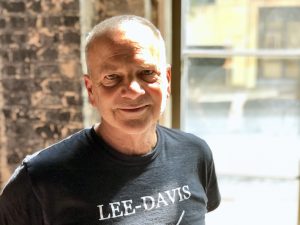 Work on the space, pending permitting approval, is set to begin in September, with the venue opening to the public by spring 2019.

Brokers Reilly Marchant and Jim Ashby with Cushman & Wakefield | Thalhimer represented the landlord in the lease.

“I sent him an email and told him what we were doing,” Gottier said of his initial interaction with Araluce. “I was nervous he would ignore my email because, you know, I thought he would think what we’re doing was crazy, but he responded.”

Located in the belly of the former Hotel John Marshall, which since has been converted into apartments and first-floor commercial space, Hotel Greene would include 13 holes of mini-golf, a bar and restaurant.

As the group develops a separate menu for Hotel Greene, Gottier said the venture will include a Greenleaf’s Room Service menu, where people can order Greenleaf’s signature Monte Cristo and French dip sandwiches while playing mini-golf.

The redesign of the space and the mini-golf course will be centered on the look and feel of a slightly faded, grand European hotel, Gottier said. Many of the holes will be crafted to feature amenities patrons would find in such a facility, such as a grand lobby area, spa and library.

“When you get your keys to your room, if it’s a rather large hotel, people usually get lost,” Gottier said. “Essentially, that’s how this course is being designed. You’re getting your ball and club at the front desk area, which acts as your key, and the course is you trying to find your room.” 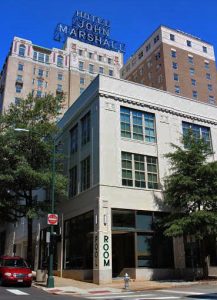 To give the feel of being on a golf course, Hotel Greene will have a beverage cart making rounds to provide hot dogs and booze slushes.

Hotel Greene patrons will launch their mini-golf game at the foot of a large stairwell terrace being designed to accommodate cultural events in the lobby area.

“At the first tee box, you’ll putt your ball through a wall to the second level onto the first green, where you’ll begin,” Gottier said. “There’s going to be a TV mounted on the wall so people can see if their ball made it to the green.”

From there, Gottier said golfers will meander their way through the space that includes the former kitchen of the Hotel John Marshall.

“We’re going to keep the original tile from the kitchen,” Gottier said. “We just want it to be good fun.”

While mini-golf is the featured attraction for Hotel Greene, Gottier said those who wish not to participate will be able to frequent the lobby area, which is being designed to accommodate a fireplace, lounge and bench seating, a bar and cafe tables.

Encouraged by downtown’s evolution, Gottier said opening Hotel Greene is a testament to the success of the Greenleaf’s.

“This wouldn’t have been possible without the support of Richmond, and what’s happening downtown,” Gottier said. “When we launched Greenleaf’s, we didn’t know how it was going to be perceived, but so far, we’ve been doing well. That’s given us the confidence to move forward with Hotel Greene.”

Love greenleaf, so I will give them a shot.

Absolutely brilliant idea. I can’t wait to see the finished product. Hats off to the Gottiers for their creativity and imagination.

have you ever thought of an idea and questioned if you were the smartest or stupidest person in the room? I have, and I bet Gottier has the same question. I’m hoping he’s the smartest because this is such a cool concept. I can’t wait to drop my ball thru the wall onto the first tee, and enjoy a booze slush on the back “7”.

Is this the old Cap’s Grill space on 5th Street? Interesting idea as indoor mini-golf (and mini-golf in general) had is time in the late 1980s/90s. Anyone else remember the indoor course on Midlothian near Robious Rd? But I have to admit the Pool hall is awesome and Circuit in Scotts Addition is always over crowded.

I’m interested to see how it does. It seems to be that everyone’s great idea in Richmond is to just add alcohol to anything. Can’t wait for HR Block to offer taxes and beer.