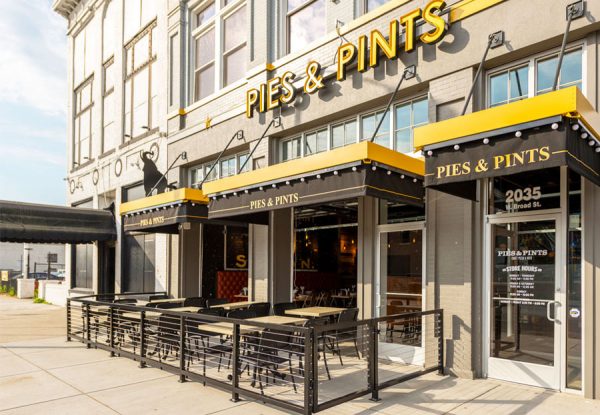 Pies & Pints’ first Virginia location is open near the corner of Allison and West Broad streets at 2035 W. Broad St. in the Fan. (J. Elias O’Neal)

With a Whole Foods store rising across the street, a new-to-Richmond pizza and beer joint has opened on Broad Street in the Fan.

Pies & Pints held the grand opening this week for its new location at 2035 W. Broad St., which opened quietly May 7. It’s the first Virginia outpost for the brand, which has 15 restaurants spread throughout Ohio, West Virginia, Indiana, Alabama and Kentucky.

The Broad Street spot is a franchise owned by Stan Warr, who also owns a Pies & Pints establishment in Morgantown, West Virginia. He spent more than $1 million to overhaul the 3,800-square-foot space, which had been vacant for years and formerly housed an office supply store. 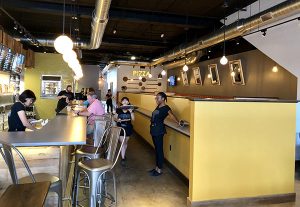 Located along the Pulse bus line and across the street from the city’s first Whole Foods that’s under construction in the Sauer Center development, Pies & Pints General Manager Aaron Leonhardt said they are pleased with the transformation of the property.

“It really doesn’t get much better than this when it comes to locations,” Leonhardt said. “VCU is down the street, Whole Foods is across the street and we’re surrounded by the Fan. We’re in a place where we can really grow.”

The location, which is overseen by head cook Ryan Barrett, also crafts custom pies with over 30 different toppings. It offers pizza by the slice for the weekday lunch crowd from 11 a.m. to 2 p.m., with prices ranging from $3.50 for a slice of cheese to $4 for a slice of its specialty pizza of the day. 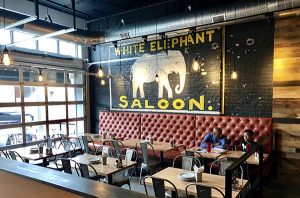 Pies & Pints may look to add another location in the market.

All Pies & Pints’ pizzas are heated on a four-tier, rotating gas stone oven than can cook as many as 25 pies at a time at 515 degrees.

“The idea is to make sure we get the crust just right so the toppings don’t slide off,” Leonhardt said.

The menu also includes sandwiches and salads, and its bar is stocked with 90 beers on draft and in bottles and 10 wines.

The restaurant seats about 155 people, and includes a private dining area in the back that can seat 12 to 18 people, Leonhardt said. Its Elephant Room area in the front of the house can also be converted into private dining for up to about 30 people.

“We really want to become part of the city’s dining scene, and accommodating to businesses and events,” Leonhardt said.

Pies & Pints is looking to add to its staff of 50 full- and part-time workers; along with growing the franchise throughout Richmond and Virginia.

“We think the location is a great place to begin growing the restaurant’s brand to other areas of Richmond and Virginia,” Leonhardt said. “We’ve looked at some areas for a second location in Richmond, as well as locations in Virginia Beach and Charlottesville.”