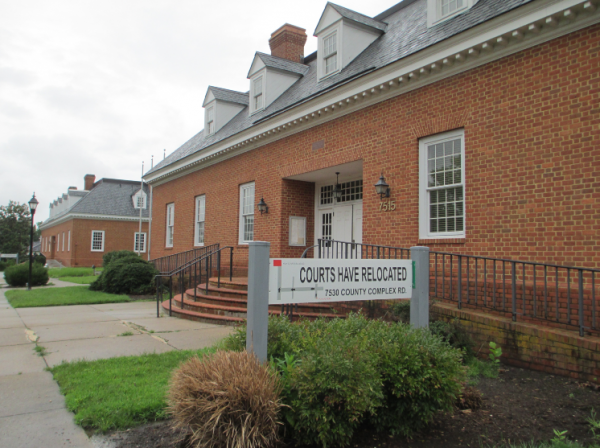 The two buildings being repurposed previously housed Hanover County’s courts. Interior work to the far building is complete, while work to the closer building at 7515 Library Drive is slated to start next year. (Jonathan Spiers)

The county treasurer and commissioner of revenue offices moved late last week into the first floor of the renovated Chenault-Weems Building at 7507 Library Drive following a yearlong, $7.6 million renovation.

The 40-year-old structure previously served as the Hanover Circuit Court building but was freed up with construction of the county’s new $36 million courthouse building in 2016.

The financial offices previously were housed in the complex’s Wickham Building, which is now vacant. County PIO Tom Harris said future use of that building, at 7497 County Complex Road, is undecided but could involve activities tied to Hanover’s tricentennial celebration in 2020.

Renovations to the Chenault-Weems Building began last summer and involved gutting the structure and replacing HVAC, electrical and plumbing systems, Harris said. The building also will house the county’s finance and management services department, as well as the internal audit department, which moved in this week.

Henrico-based Loughridge Construction was the contractor on the project, which was designed by Richmond-based Moseley Architects. Chesterfield-based Timmons Group handled engineering work, and the county enlisted Fairfax-based McDonough Bolyard Peck to oversee the project as clerk of works.

The treasurer’s office reopened Thursday, and the commissioner of revenue office reopened Tuesday after closing for several days to test a new customer-service system. The new system, which is being rolled out with the move, assigns customers to service providers based on individual needs through a virtual line log-in process. Taxpayers also can make appointments remotely.

The county also plans to repurpose an adjacent building that previously housed Hanover General District Court. Harris said Moseley Architects has been selected for that project as well, with designs expected by year-end, and construction going out for bid and a contract awarded next spring.

Construction on that project is slated to start next July and take 12 months to complete.

Interesting, because I seem to remember the argument for building new facilities was that the existing buildings were too old and it was going to be too expensive to renovate them. So not only do county residents have to pay for the new building, now we have to pay for renovations to the old ones that were supposedly not worth it.

Millie, the buildings were too old and way too small to house the county’s courts. Some quick searching online uncovers these facts (see below). Hanover has grown significantly since those buildings were built (1970s) and courts now require a good deal of audio visual technology.

I understand the county needed updated facilities. I wish they felt that way about the old, outdated, overcrowded, overcapacity high school in Ashland, Patrick Henry High School, which has needed updating and new AV technology for at least 10 years. But my point is that I remember reading the old buildings would no longer be needed once the grand, new, state-of-the-art, multi-million dollar, larger building was constructed. And yet here we are, renovating those old buildings which is costing millions. I also remember reading it was too costly and not worth it to renovate them. Regardless, I would rather see… Read more »