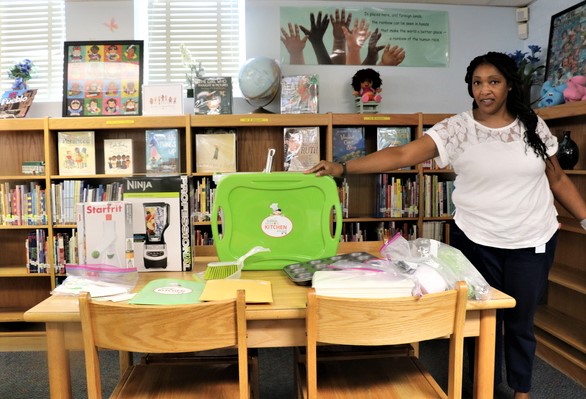 Sold under the brand Kitchen a la Cart, the carts contain a sink, retractable counter space, induction cooker and cooking supplies along with lesson plans and recipes.

The company recently launched an affiliate in northern California – its first in that state – and now has carts in 32 states. 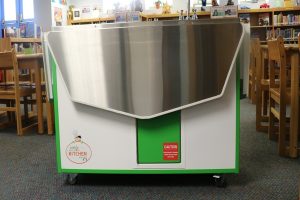 The Kitchen a la Cart is being stored in the school’s library until it is ready to be used. It comes with a sink, retractable counter space, induction cooker, and cooking supplies.(Charlotte Woods)

“As we increase our reach through a network of affiliates, we inch closer to an Edible Education-trained chef in every elementary school across the United States,” Butler said.

Butler said Edible Education also recently sold a cart to the Richmond Public School Nutrition Service to be used in the newly renamed Barack Obama Elementary School in Northside, as well as another to VCU.

They’re the company’s first cart sales in the city, as it has focused on placing its chefs in nearly 60 central Virginia schools for instructions and demonstrations. Edible Education also hosts cooking classes and a summer camp for kids.

But it’s the carts, which the 7-year-old company rolled out around three years ago, that have become its flagship product.

“We’ve been taking this thing all around the country to various conferences and I think we’re getting traction,” said Quincy Jackson, executive chef at Edible Education and a former White House chef who most recently served as Obama’s Oval Office chef. “As we’ve been out on the road, we’re finding out that more and more schools and hospitals have this need for culinary programs.”

Auxiliary Systems manufactures the carts in Virginia. They can be purchased for $9,995. A smaller version – the Kitchen a la Cart Jr., which includes everything but the kitchen sink – runs for $3,500.

The carts generated $1 million in revenue last year, Butler said, adding that the company is close to turning a profit.

With its expansion in the West, registered dietician Colleen Hough and chef Leigh Blakemore purchased a cart and affiliate rights in Fortuna, California. Their plan is to travel with the cart from school to school in their rural and sprawling counties.

“That’s the beauty of this teaching, no brick and mortar needed,” Butler said.

Hough first met Butler at a nutrition conference in Chicago about a year ago and immediately took an interest in Kitchen a la Cart.

“I saw the cart and I thought, ‘My word, where has this been all my life?’” Hough said.

In Barack Obama Elementary, Stephanie Purcell, an instructional assistant, will be training teachers so they can begin to utilize the cart beginning this academic year. That cart will remain in Purcell’s care, stored in the school library, and she said several teachers are eager to begin using it.

VCU’s Department of Internal Medicine also recently purchased a cart for use in two pilot programs involving cooking classes for sickle-cell and weight-loss clinics. The cart was used when a demonstration dinner of salmon and ratatouille was prepared for project stakeholders. The weight-loss program is expected to begin next month.

“It’s the perfect engine to ease into the sort of changes I want to see,” said VCU’s Leslie Bobb, an administrative assistant involved in the program.

As she plans nationwide growth, Butler said she was inspired to form her company seven years ago after her interactions with students showed her a need for more education about nutrition and cooking.

“I was just dismayed at what these students thought was food,” she said.

The recent California launch also has her thinking of a next step – offering a formal franchise model for Kitchen a la Cart.