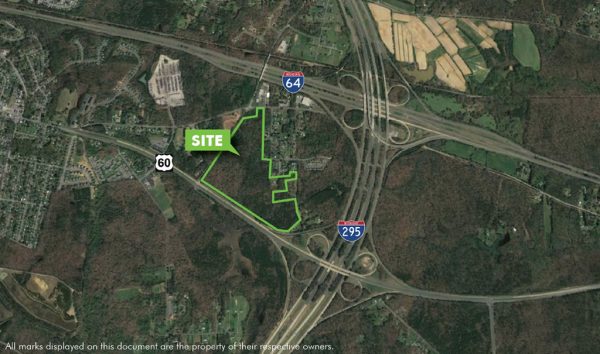 A developer from New Jersey has officially staked his claim in eastern Henrico County as he looks to add more rooftops and retail to the area.

Salvatore Cangiano last month finalized his $1.4 million purchase of 80 acres of bank-owned land at 310 Clayman Road, where he’s planning to build Drybridge Commons. The development, which will sit near Dry Bridge and East Williamsburg roads, will include 43 single-family residences, 230 townhomes, and 13 acres of commercial space with retail, office space, a hotel and a fast-casual restaurant.

Cangiano placed the site under contract this year and had it rezoned this summer to make way for the mixed-use development.

The land most recently was assessed by the county at $3.1 million and had been owned by Essex Bank, which took hold of the land through foreclosure in 2011.

David Jordan, Cangiano’s Virginia project manager, said they are working with the county on preliminary utility designs to upgrade and expand water and sewer capacity for their site and a few surrounding properties.

“That has to be addressed before we begin construction,” Jordan said.

Jordan said the site has received increased attention from several commercial users that he would not name.

Last summer, the county approved a provisional-use permit for a 24-hour convenience store and gas station at the intersection of Dry Bridge and East Williamsburg roads.

Drybridge Commons is set to bring new life to land that was left in a holding pattern after the downfall of development firm The Tetra Cos. in 2010.

Founded in Virginia Beach in 2005, Tetra proposed a massive retail development for the site with a mix of retailers and several restaurant pads. The firm also had eyed a three-story senior housing development, along with a cluster of 23 single-family homes.

The county Board of Supervisors approved Tetra’s site plan and rezoning from agricultural uses in 2007.

Tetra funded its projects through a series of investment funds that raised as much as $50 million from investors and $100 million in bank debt at its peak in the early 2000s to construct a series of mixed-use developments across the Southeast.

But when projects began to stall and Tetra’s promises of investment returns fell short, state and federal officials launched an investigation into the firm. It closed around 2010.

Foreclosures of Tetra’s land ensued, including the 80-acre parcel now being re-primed for development.

While Dry Bridge Commons will be Cangiano’s first project in Henrico, he is no stranger to the Richmond region.

He previously owned the property that has become Magnolia Green, the massive golf course-anchored Chesterfield development, where he still owns thousands of acres of wooded land. His company also has rezoned 11 acres near Genito Road and Price Club Boulevard for the construction of 73 townhomes. and it’s preparing to carve out 311 single-family lots on 189 acres for the Cold Creek subdivision at 17500 Duval Road.

Where else does development in Henrico go, but east? Certainly Facebook has given the Varina District some renewed pizzazz with its $2B investment. Others seem certain to follow them. There’s plenty of land, a railroad, a major airport and two Interstates for infrastructure.

It can go “up” in the west too. Redevelopment is continuing in that part of the County (think Libbie Mill and Innsbrook), but overall Henrico is in danger of it continuing to move into the wild west in Goochland.