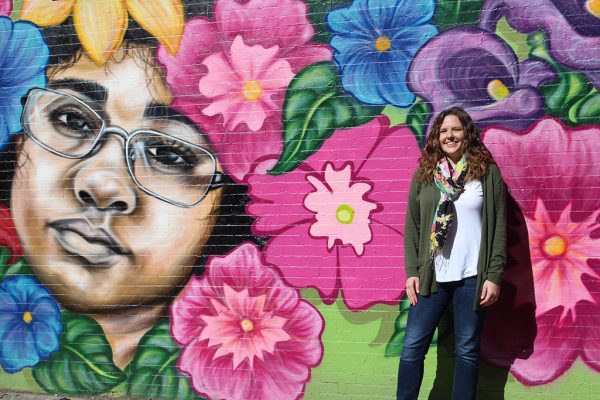 Kayla Diggs Brody poses by one of her favorite Jackson Ward murals by Hamilton Glass. Photos by Charlotte Woods.

Kayla Diggs Brody is launching Richmond Mural Tours, which will offer guided walking tours of the city’s myriad of murals.

While attending VCU and now working as a project coordinator at the university’s Partnership for People with Disabilities, Brody has enjoyed views of Richmond murals through the windows of the connector bus on trips between the school’s Monroe Park and MCV campuses.

That inspired her to learn about the murals and to start guided tours, especially when she realized no one else was doing it. Brody obtained a business license in January and began giving pilot tours in September to family and friends.

“I haven’t had an official tour yet with people that I don’t know,” she said. “I have some lofty goals but I’ll get there.”

The walking tours cost $20 per person. For now, she offers a tour of Jackson Ward, with plans to expand into Church Hill and Oregon Hill. 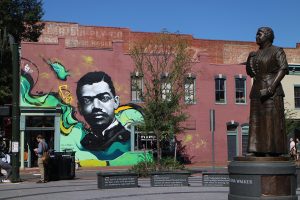 “I started to look around and looked at the history of Jackson Ward and thought, ‘This is a really significant place. I should try and highlight this as a tour,’” Brody said.

Murals have popped up on the sides of buildings around the city for years, in part through the efforts of the Richmond Mural Project by RVA Magazine founder Anthony Harris and former City Councilman Jon Baliles’ RVA Street Art Festival. By 2016, there were 100 murals in Richmond, and that number has fluctuated since then.

Brody is a one-woman operator at the moment, but plans eventually to hire other tour guides.

“I need to hone in on perfecting this tour first,” Brody said. “It takes a lot of time to curate how you want people to see or to learn about the neighborhood and the history, while making sure you’re giving the proper respect to the artists as well by doing as much research as you can about why they were influenced for the mural and who they are.”

Some of her research includes interviews with artists she has tracked down.

“I haven’t reached out to as many as I would have liked to yet, but that is a goal,” she said. “Especially the artists who are featured on the tour or who seem to be prominent figures in the mural world in Richmond.”

One of Brody’s favorite murals is by Ed Trask near Carytown; another favorite is in Jackson Ward.

“Some of the murals talk more about community and highlight people of interest, so I really love Hamilton Glass and Austin Mile’s ‘Girls For A Change’ mural on 1st Street,” Brody said. “Just what that one stands for is significant. It’s usually one of the last ones I point out on my tour, so I leave people with the message of what Girls For A Change stands for.”

Girls For A Change is a nonprofit that engages with girls of color through events and after-school programs. There’s also a division called Girls Who Code, aimed at preparing young women for careers in technology.

Glass and Miles worked with 10 girls from John Marshall High School to design and paint the mural at 24 E. Broad St. in October 2017. Virginia Credit Union sponsored the project.

Brody said she also wants to work in the history of a given neighborhood, starting with Jackson Ward, beyond just its murals.

“I feel like I would be at fault if I did not include the history of this neighborhood,” she said. “There’s so much about the city that people don’t know. I’ve been here for 10 years and I didn’t know as much about Jackson Ward until I started researching it for this tour. You just kind of live and do the grind from day to day, but maybe don’t explore the city as much.”

Amazing idea! The art, & to mix in the history of the neighborhood is a great combo. Good luck!

I’ve led a mural walk for the last several years via Central Virginia Trailblazers after taking it over from another group leader. This year’s walk is coming up November 17th. We have already gone to all of the “official” murals from the Richmond Mural Project. I’m working on trying to compile a list of “unofficial” murals – any suggestions are welcome!