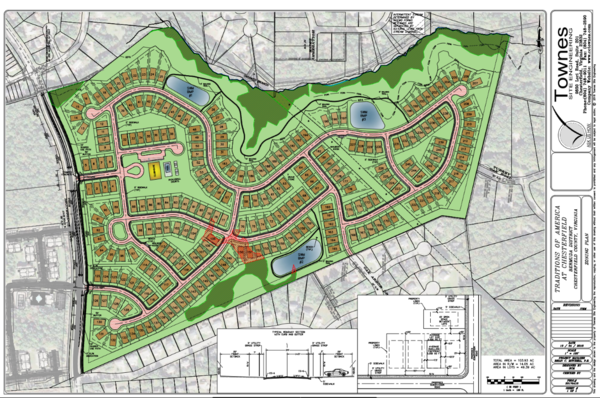 A Pennsylvania builder is seeking zoning approval for a 250-home development that would target homebuyers aged 55 or older in Chesterfield. (Submitted)

Correction: The home sizes would range from 1,200 to 1,500 square feet. An earlier version incorrectly reported a larger square-footage.

An out-of-town builder looking for a piece of the local 55-and-up residential market is taking some time to finetune its proposal.

Pennsylvania-based Traditions of America, which focuses on residential communities for homebuyers 55 and older, is seeking zoning approval for a 250-home development on nearly 104 acres at 10600 Hollyberry Drive, on the east side of Ironbridge Boulevard south of Centralia Road in Chesterfield County.

The age-restricted development, which would consist of single-family detached homes grouped in clusters, would be the company’s first project in the metro Richmond market, said Andy Condlin of law firm Roth Jackson, which is representing Traditions in its rezoning application. 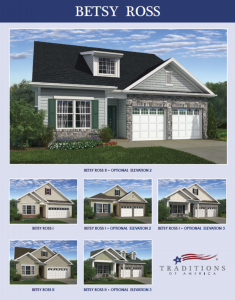 The development would consist of single-family detached homes grouped in clusters. (Submitted)

Condlin said family connections in Richmond for some of the company’s representatives prompted Traditions to take a closer look at the local market. He said the company primarily builds in Pennsylvania and Ohio.

“This would be their first (here),” Condlin said. “It’s very much a planned development with heavy amenities.”

The two-story homes would range from 1,200 to 1,500 square feet of floor space, on lots that would start at 6,500 square feet. Community amenities would include a 6,500-square-foot clubhouse, a pool and community room. Multiple model homes are also planned, Condlin said.

Prices for the homes were not specified in documents submitted to the county, and an overall development cost was not disclosed. Kenneth Wenhold, Traditions’ acquisitions director, said the homes would be comparable in price and product to the company’s other communities, which start in the upper $200,000s to the mid-$300,000s.

Wenhold said the development would be similar to the nearly two dozen other 55-and-up communities Traditions has built over the years in the Mid-Atlantic and Midwest. He said specific pricing and project costs could depend on any changes made during the zoning review process.

Traditions is under contract to purchase the 104-acre site, which is part of land owned by Marjorie Taylor of Doswell. Chesterfield property records show the nearly 120-acre tract is valued at $2.34 million, according to the latest county assessment.

The rezoning request was put on the county planning commission’s agenda this month but was deferred to November. Condlin said a second deferral to a meeting in December would be requested to allow more time for revisions to proffers.

The rezoning would allow for exceptions to lot width, area and setbacks on the site, which is zoned R-12. Traditions also is seeking a waiver to keep it from being required to provide a road connection to Turkey Oak Road in the nearby Autumn Oaks subdivision, according to county planning staff.

Note: This story has been updated to include information received after deadline from Traditions of America.

Yeah I’m kind of hoping that’s a miss print because it doesn’t make sense to me either. Plus it states these are ‘two story’ single family detached. Most old folks really don’t want to deal with stairs either. Most 55+ communities we’ve dealt with recently are single story if they’re going to be single family detached.

Reading this now, the article mentions 6,500 sq. ft. lots and homes 1,200 to 1,500 sq. ft.
Maybe the writer edited it after you read it earlier.
Two story does not usually make sense for age-restricted.

Yeah they edited the story.

Those figures were major details. How could the writer/editor publish on a digital format and not confirm the numbers prior to posting?

After looking, and looking for a 55+ home, I can tell you, this “just about right” to a little bit small for the market. These look exactly like 90% of the 55+ communities we’ve seen.