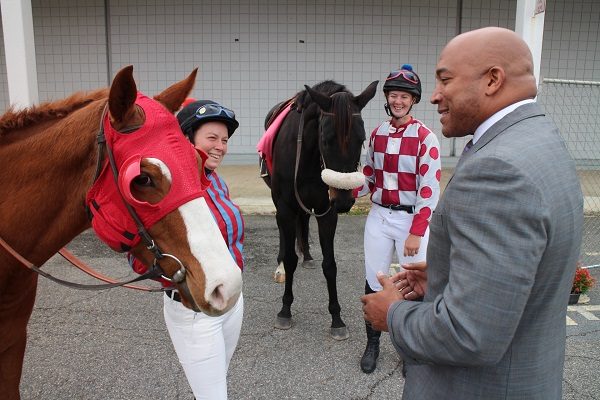 The in-the-works return of horse racing at Colonial Downs is improving the odds for a dormant retail property in Richmond’s Southside.

Officials on Wednesday celebrated the start of site work for Rosie’s Gaming Emporium, an off-track horse-betting parlor planned for the former Kmart property at 6807 Midlothian Turnpike.

The $41 million project – one of 10 such facilities planned across the state to supplement the reopening of the New Kent County racetrack – would redevelop the shuttered big-box store into a 140,000-square-foot off-track betting parlor with 700 “historical horse racing” game machines, a 100-seat restaurant, a bar and gift shop.

The facility is scheduled to open in June, ahead of the planned return of horse racing at Colonial Downs next fall. 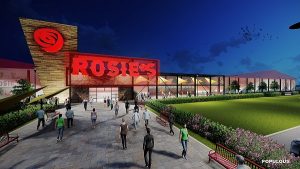 Gomes said the Rosie’s facility, which is planned to operate seven days a week, is expected to draw thousands of visitors, primarily from out of town, and generate up to $4 million in tax revenue for the city and another $11 million for the state.

Colonial Downs Group is paying the full cost of the development, which does not involve local or state credits or subsidies.

Gomes was joined Wednesday by John Marshall, Colonial Downs general manager and senior vice president, and Debbie Easter of the Virginia Equine Alliance, who touted the economic impact of the horse racing industry.

Also set to benefit from the Rosie’s arrangement is the nearby Miles Jones Elementary School, which City Council member Michael Jones, whose Ninth District includes the area, said would receive $500,000 over five years through a pledge from the development group. 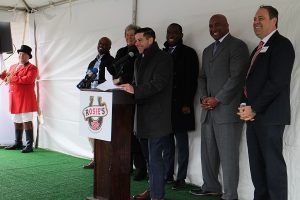 Jones and Mayor Levar Stoney praised the group for proactively meeting with the city and neighbors to present the project.

“They did their due diligence,” Jones said. “Even though they had by-right zoning – they could come in and just do the project simply based on code – they came in and did it the right way, the way a business partner should truly do it.”

The group is working with Midlothian-based CK Bosworth Construction to build the Rosie’s facility, which is designed by architecture firm Populous. Richmond-based Commonwealth Architects is designing the interior in conjunction with Within, a women-owned design firm in Norfolk.

Gomes said the group closed Tuesday on the property, with a purchase price of $7.5 million. The 16-acre site previously was owned by J&J Midlothian LLC, which purchased it in 2013 for $4.25 million and had planned a food store that never materialized. A city assessment most recently valued the property at $3.55 million.

Gomes said the site fit perfectly with the group’s plans for Rosie’s.

“It had great traffic flow, it has its own stoplight already. It was built for a Kmart that would get thousands of visitors a day, so there would be little impact to the local businesses in terms of traffic,” Gomes said. “It’s right off the highway, and it was perfectly positioned to bring people from out of town in to enjoy it.”

The group is pursuing other off-track betting sites across the state. Two local facilities – Breakers Sports Grille in Henrico and Ponies & Pints in Shockoe Bottom – are operated by the Virginia Equine Alliance, which plans to share revenue from those sites with Colonial Downs Group.

Prior to closing in 2014, Colonial Downs had an off-track betting facility at 4700 W. Broad St., now the site of a Lidl grocery store.

The return of Colonial Downs coincides with another gambling-centered development proposed for New Kent County: a $700 million resort and casino pitched this year by the Pamunkey Indian Tribe.

Correction: Architecture firm Populous is designing the Rosie’s facility, with interior design work from Commonwealth Architects and Within. An earlier version of this story did not include the full design team. 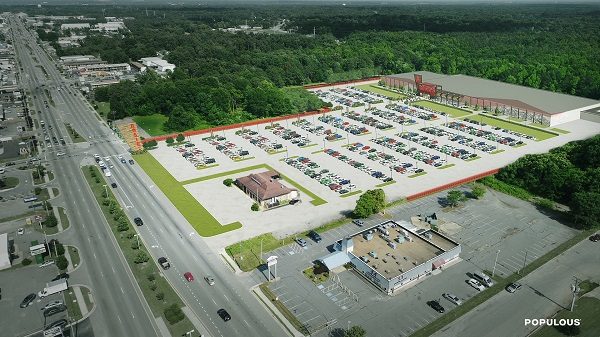 An aerial rendering of the site when developed. (Submitted)