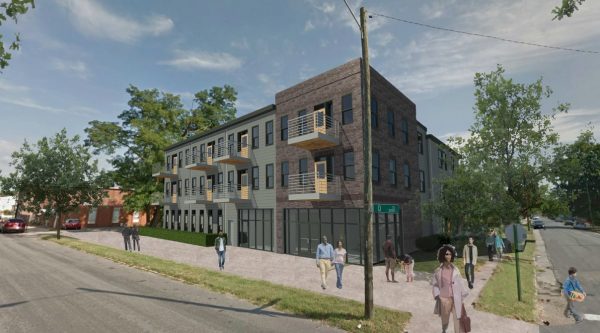 Slow and steady is the name of the game for Daniil Kleyman’s latest deal in Church Hill.

“I’ve been waiting on the area to mature more,” Kleyman said. “There is a ton of momentum in North Church Hill that made moving forward with this kind of mixed-use project ideal.”

Plans call for a three-story building to rise at the corner of North 30th and Q streets, with 13 apartments that will sit above about 1,200 square feet of ground-level retail, Kleyman said.

Of the apartment count, 10 of the units will have one bedroom, while one unit will have two. The development also will include two one-bedroom townhome units.

“A lot has changed since (2013),” Kleyman said. “Residential demand is on fire here, all of our rental units (at other properties) are 100 percent leased, and there are more home sales occurring in the neighborhood. We can’t build them fast enough.” 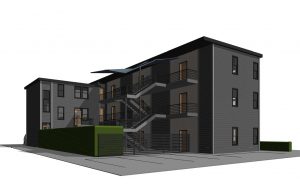 The units are slated to be be delivered to tenants by spring 2020. (ADO)

A cost estimate for the project was not disclosed. Kleyman said construction is slated for spring or early summer 2019, with the units being delivered to tenants by spring 2020.

Richmond-based ADO is designing the development. Oneil Engineering Services has been tapped to provide the mechanical electrical and plumbing for the project.

A general contractor has not been selected.

Kleyman described several of the one-bedroom units as being slightly smaller than some of the newly constructed apartments in the vicinity, with the spaces being built around mid-500 square feet.

While a rental rate has not been determined, Kleyman said the unit sizes will keep the asking rates reasonable.

“We’re looking to make the units market rate, but because of their size, they are not going to be the type market rents you’re seeing for some of the units in the neighborhood,” Kleyman said.

To make the commercial space more accessible to patrons, Kleyman received a variance from the city to place the entryway at the intersection of Q and North 30th streets. Depending on demand, he said the space could be divided for two tenants.

Aside from his pending apartment project, Kleyman said he also is planning to begin construction in the spring on four duplexes on property he owns at 1204 N. 30th St. that will house eight apartments during the spring of 2019, along with six for-sale homes on several infill lots in the vicinity.

“We’ve seen a lot of growth in Church Hill, with the new grocery store on Nine Mile Road, and the redevelopment of the old Armstrong High School site,” Kleyman said. “Time will tell what will happen at Armstrong, but you can’t deny that this area is finally beginning to come into its own.”