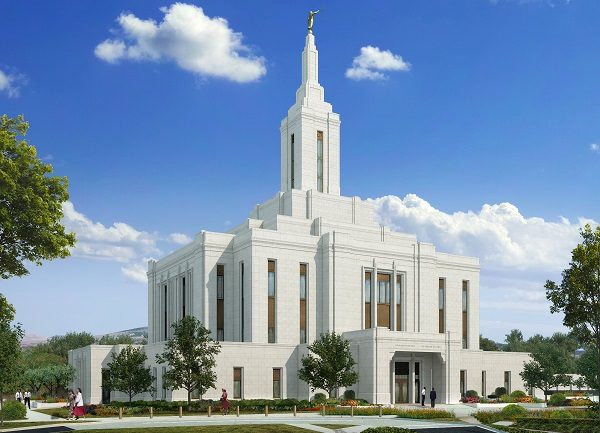 Church leaders broke ground last week on a new temple in Pocatello, Idaho. While the design for Richmond’s temple will not be exactly like the rendering, it would include elements of the building such as the steeple. (Church of Jesus Christ of Latter-day Saints)

The Church of Jesus Christ of Latter-day Saints last week filed preliminary plans to construct a temple near the intersection of Staples Mill and Mountain roads in Henrico County – its first temple in Virginia.

Plans call for an 11-acre wooded lot at 10915 Staples Mill Road to be scrapped to make way for a two-story, 36,200-square-foot temple and an adjacent 16,200-square-foot meeting house. A small maintenance building also is proposed for the site, while an existing two-story residence at 4151 Mountain Road would remain.

The site will not require rezoning.

Plans call for a large steeple capped with a golden statue of Mormon religious figure Angel Moroni, which will sit nearly 151 feet tall on the site.

The project would include extensive landscaping and more than 240 parking spaces throughout the property.

The planning documents don’t have a construction timeline or a groundbreaking date for the project.

John Stoddard, who is listed as the project manager for the Virginia temple, did not return multiple calls and an email for comment Tuesday afternoon.

Richmond-based Austin Brockenbrough & Associates is listed as the temple’s civil engineer. Salt Lake City-based Richardson Design Partnership, which has designed several temples for the church on the West Coast and in Japan, has been retained as the architect.

During their annual conference in April 2018, church leaders announced the Henrico temple would be built.

The closest temples for practicing Richmond-area Latter-day Saints, also known as Mormons, are more than two hours away in Kensington, Maryland, near Washington, D.C., and Apex, North Carolina, outside of Raleigh.

Beginning in 2017, church leaders quietly assembled the collection of three parcels along Staples Mill and Mountain roads for about $2.3 million, according to county property records. That includes an 8.1-acre parcel purchased from Marchetti Properties that will be home for the temple and meeting house.

The county assessed the combined properties at about $1.44 million.

Church leaders estimate that Virginia is home to about 100,000 members – making it one of the states with the largest populations of Mormons without a temple.

I am so excited to see a temple nearby!

I’m with you! I’m also excited about this announcement. This will be a game changer for members in the area, but will also be a great neighbor to those who live and work in the area too. The grounds are usually done very beautifully! Something the area would welcome and be very proud of!

How is this facility different from the location at 5600 Monument Ave, Richmond, VA 23226?

This will offer a greater degree of monumental kitsch.

@Ed Christina
Here is a link that shows what a temple is. The building at 5600 Monument is a regular meeting house for weekly Sunday services.
https://www.comeuntochrist.org/site/temples

151 foot tall steeple with a golden statue atop of it? How is that not going to be out of place in a largely residential area? Yikes. More land off the tax roles.

The Glen Allen Church of Christ is kitty-corner, Hindu Center of Virginia across from that, and the Saint Athanasius church right next to it. There’s a freeway interchange 1/2 mile to the north and the Glen Allen High School across the road to the south, with the Glen Allen Library not far to the south too. It is consistent with the mass and scale of several of those and the use of several others. You wouldn’t think think those other uses detract from the residential neighborhoods surrounding them. Don’t worry, temples of the Church of Jesus Christ of Latter-day Saints… Read more »

What a wonderful addition to Henrico County and the Richmond metro area. Virginia members of the church are so excited! Here is a video that shows some of the process of the design and building of a temple: https://www.youtube.com/watch?time_continue=2&v=E9BHg0DaVjc

What a beautiful addition to the Richmond, Virginia area!

This is so exciting!!! I can’t wait to visit this temple here in the heart of Virginia! It will be beautiful and majestic! What a blessing to us all.

For Latter-day Saints, this is a really big deal! But for those living in the Glen Allen area, everywhere a Latter-day Saint temple is built property values increase. Temples are architectural masterpieces inside and out.

Thank you for this very thorough and well written story.

So excited for this new Temple in our hometown. Hoping that the Bristol, VA Ward will be assigned to this temple!

I am very excited. What a blessing for everyone who will get to enjoy the temple and also the grounds. For us it means more time serving in the temple and less time traveling.