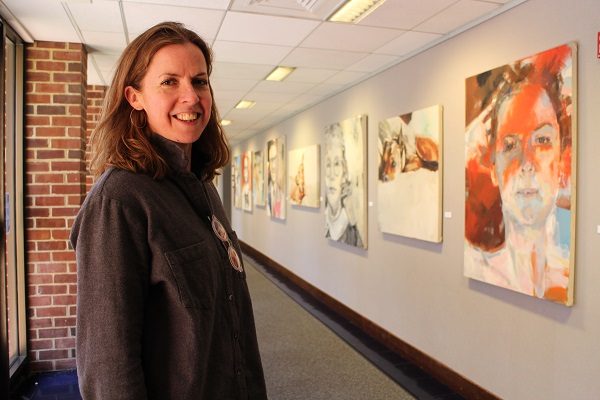 Beth Borum beside her show at St. Catherine’s School, her alma mater.

After a dozen years honing her advertising chops in Chicago, Richmond native Beth Borum’s return to her hometown is playing out with a touch of serendipity.

The St. Catherine’s School grad, who recently joined up with ad agency Elevation as an associate creative director, received a warm welcome back to town – albeit inadvertently – by her alma mater, where the art she pursues outside of work is on display as part of her graduating class’s upcoming 25th reunion.

Diego Sanchez, the private all-girls school’s visual arts department chair, reached out and invited Borum to show her work as part of the festivities – not knowing that she was back in town, Borum said.

“I don’t think he knew I was actually in Richmond at the time. He thought I was still in Chicago,” she said. “I immediately replied with interest, and then upon learning that I was in Richmond, it was facilitated all the more easily.

“I haven’t set foot on campus in a long time, and this is such an incredible way to do it,” she said. “It’s serendipitous coming home and being able to have this opportunity to show my work at my alma mater.” 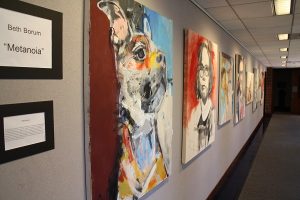 The oil-on-canvas portraits are on display in St. Catherine’s Rennolds Gallery.

Borum’s solo show – a collection of about a dozen pieces, including primarily large oil-on-canvas portraits as well as smaller landscapes and abstracts – went on display this month and remains up through late April in St. Catherine’s Rennolds Gallery, a window-lit hallway connecting the Episcopal diocesan school’s chapel and library.

The large oils include portraits of her dog, family members and a self-portrait. The pieces are among the work Borum has produced since picking her brush back up several years ago after a period of putting her day job first.

While she describes her art as a release from her other involvements at work and in life, Borum said her creative pursuit outside of advertising also influences it, and vice versa.

“Painting for me is about a liberation and allowing anything to happen, and there are no rules whatsoever. When that’s brought into the office, that can absolutely be a helpful perspective,” she said.

Growing up in the Fan, Borum studied art during her 13 years at St. Catherine’s and on into her college years at Syracuse University, where she picked up a bachelor’s degree in fine arts with a focus in ad design. 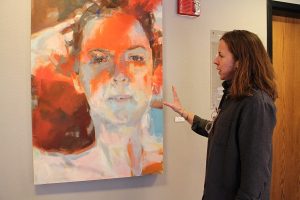 After several years working in the Norfolk and Virginia Beach area, she resumed her studies at the VCU Brandcenter, then called the Adcenter, completing two years in the art direction track.

After a stint at Royall & Co. (now EAB) as an art director, Borum said she was ready to take a crack at a bigger city and ended up in Chicago, where she worked at a business-to-business marketing agency, a university and a smaller agency called Popskull, where she worked as a creative director.

When what she called “life momentum” lured her back to Richmond – “Missing my family like crazy, missing my roots,” she said – Borum called on Elevation principals Aaron Dotson and Frank Gilliam, whose agency she said she’d admired from afar.

As an associate creative director there – one of three along with Kate Bredimus and C.J. Hawn – Borum oversees creative content for clients such as Virginia Green, James River Association, Swedish Match and Children’s Museum of Richmond.

“It’s incredibly collaborative. We’re all bouncing thoughts and ideas off each other at all times,” Borum said. “Kate and C.J. and I, we have our specific accounts, and it’s just really fostering all of those but leaning into each other for help where need be.”

While she said such collaboration is key in her day job, Borum noted her painting is a solitary endeavor, though she said her approaches to both can end up mixing with each other – not unlike oils on canvas. 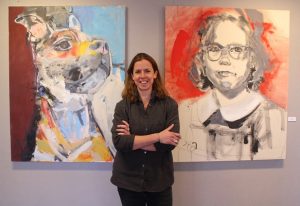 Borum’s paintings focus on loved ones, such as these portraits of her dog and her mother in her youth.

“They are different and they aren’t different,” she said of her on- and off-the-clock creative pursuits. “When I’m painting, I’m by myself, it’s a solitary kind of act, and it’s all about collaboration when it’s in the agency. But it’s all problem-solving, it’s all allowing for the unexpected.

“The more I do it, the more I learn some of those correlations between the two. I think it does boil down to being open to the unexpected and allowing for a solution to come out of somewhere where you didn’t anticipate it.”

Having moved back to Richmond about five months ago, Borum said she is set to close on a house with a studio in the yard – or the other way around. Laughing, she said, “I kind of bought a studio with a house in the yard, actually.”

While she plans to keep up her painting there, Borum said she’s looking forward to her school reunion, which will kick off with a reception highlighting her show. Having started her creative pursuits at the school, Borum said the show makes her return home that much sweeter.

“It was icing on the cake. What a way to kickstart my homecoming,” she said.