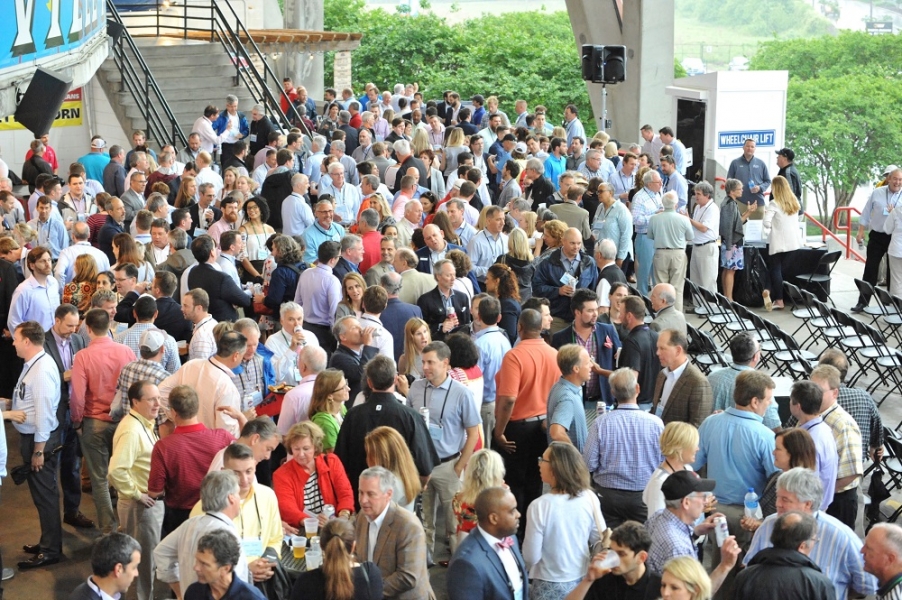 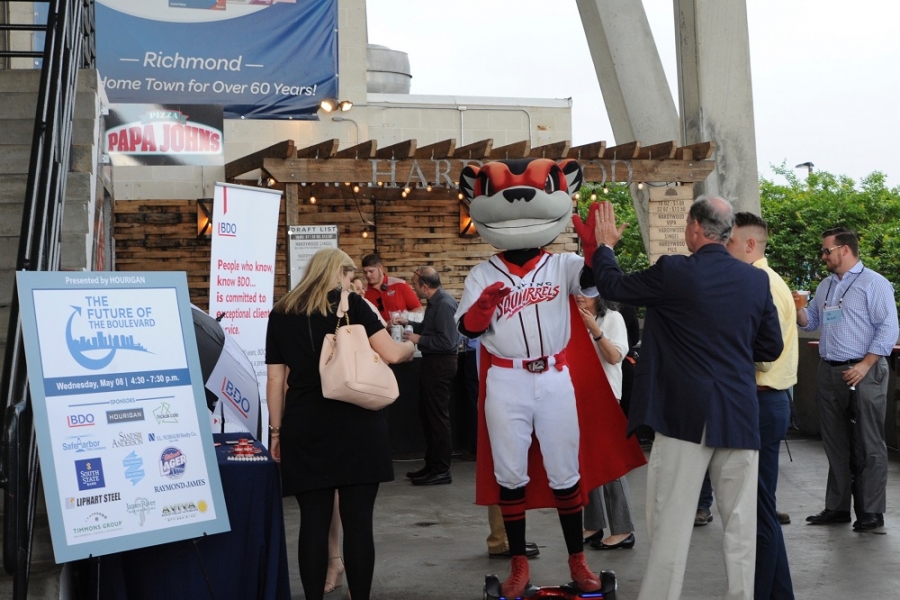 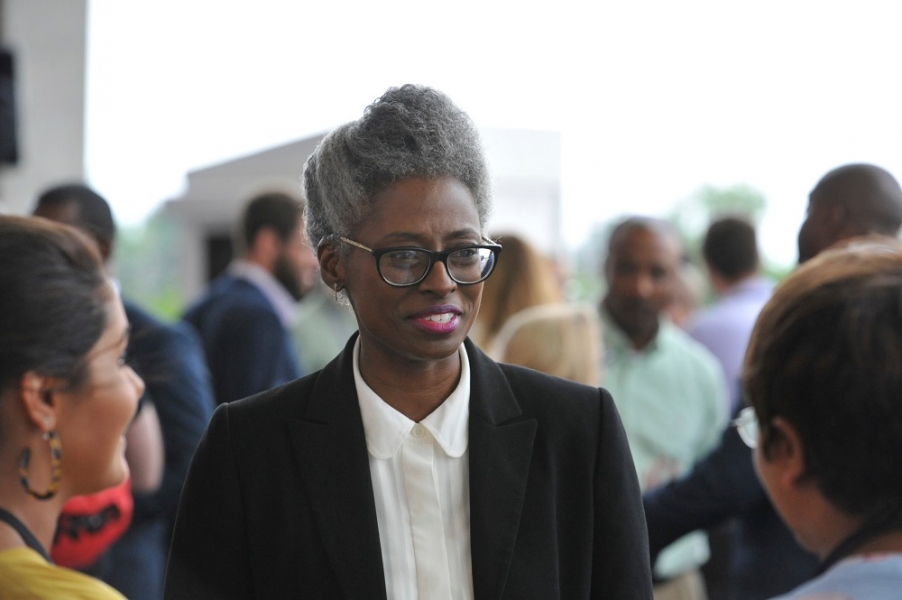 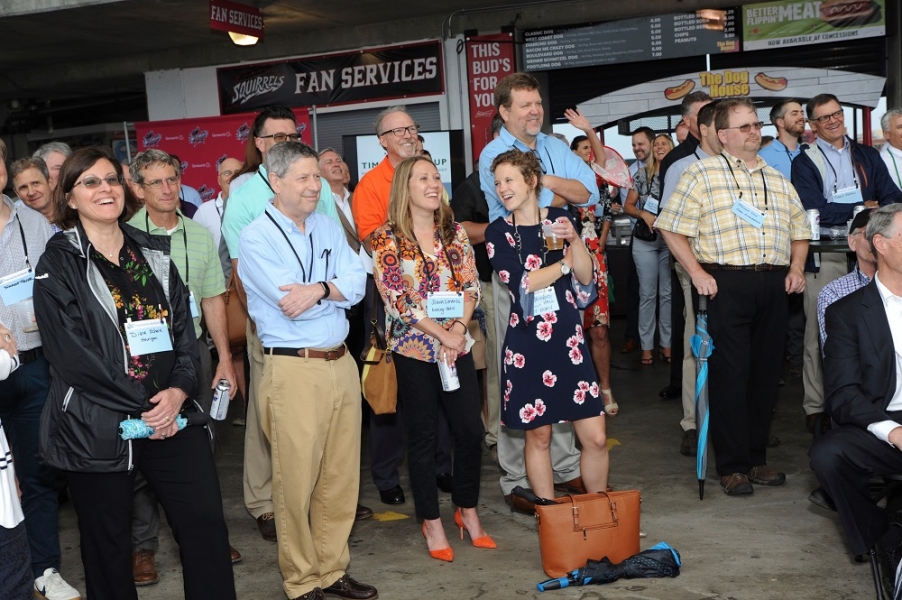 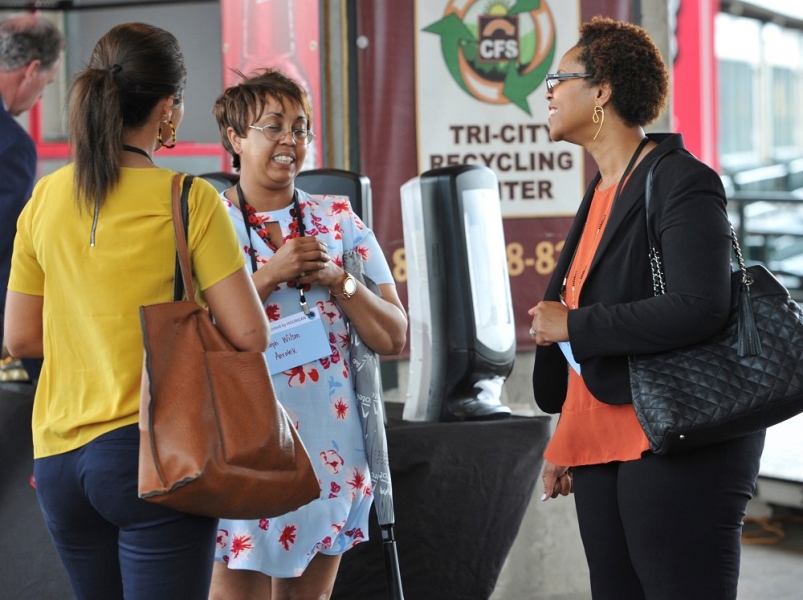 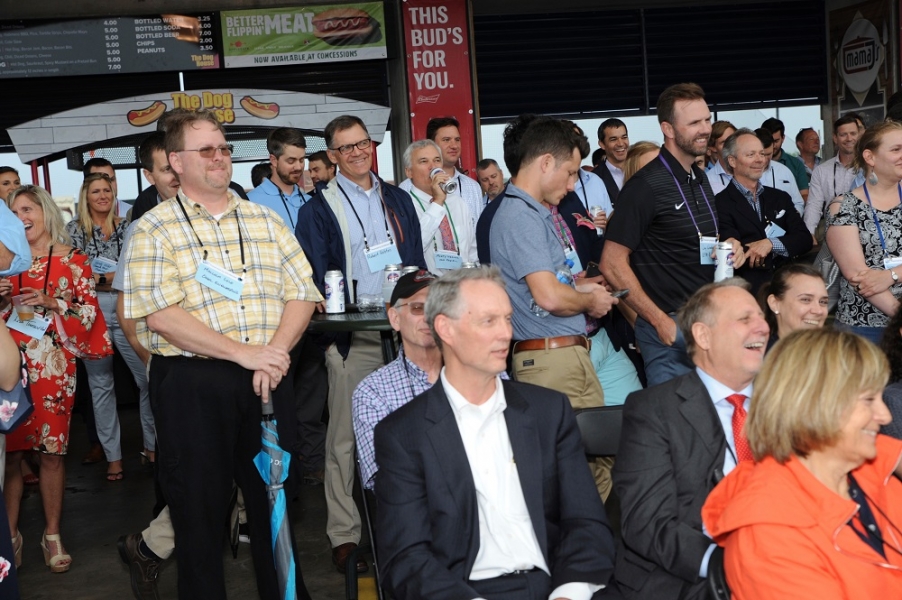 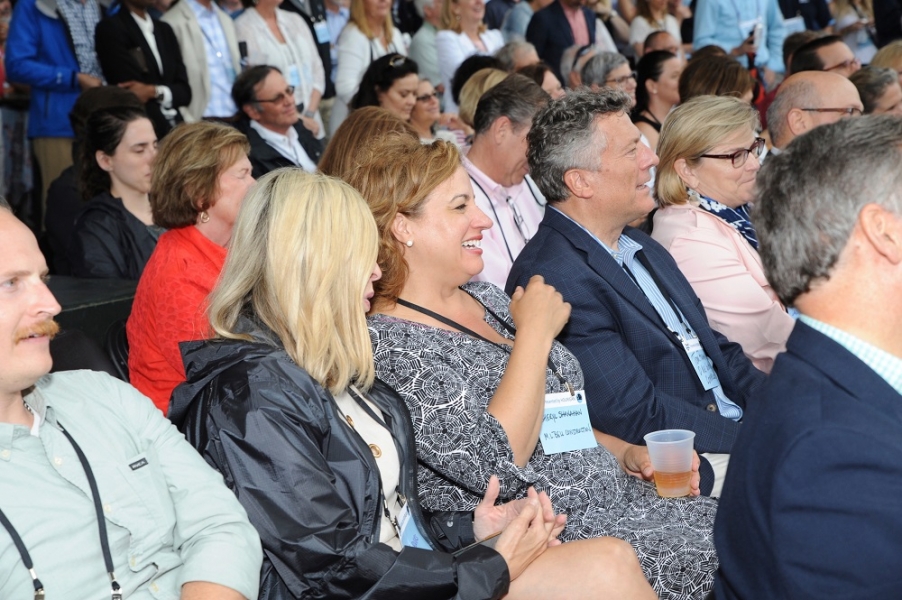 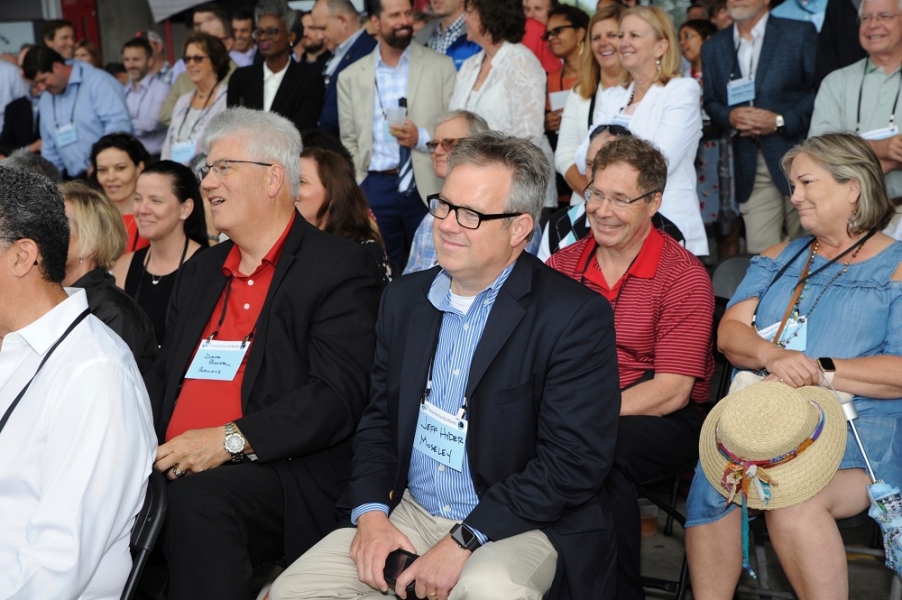 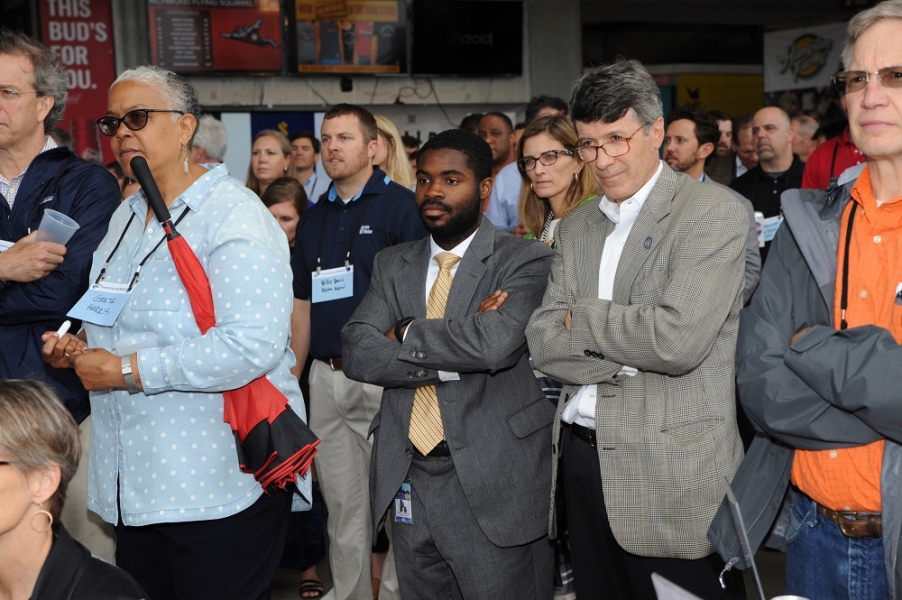 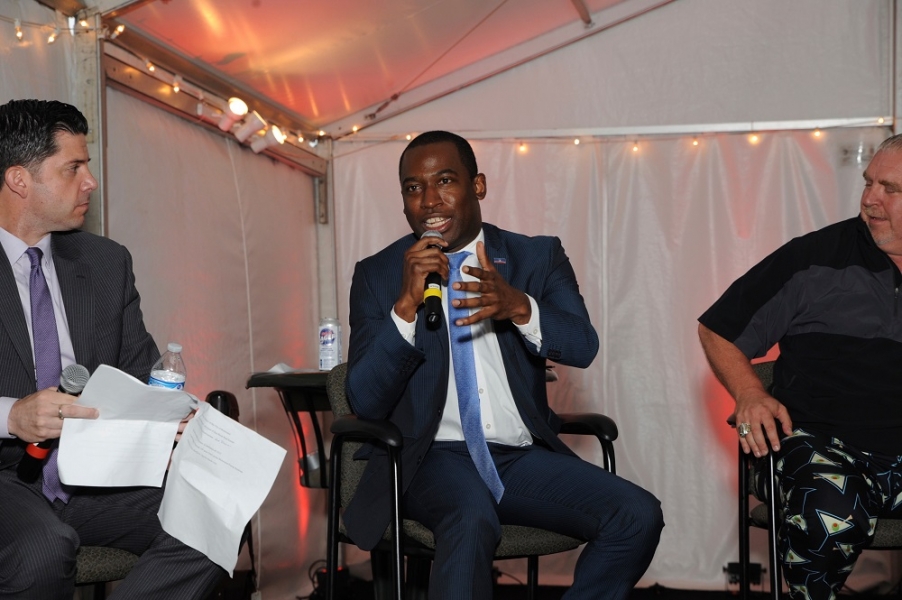 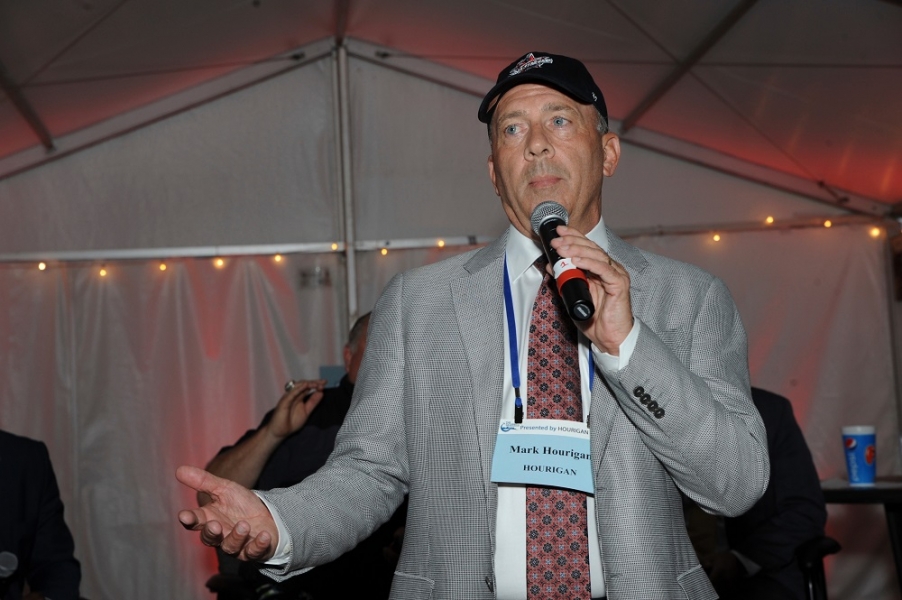 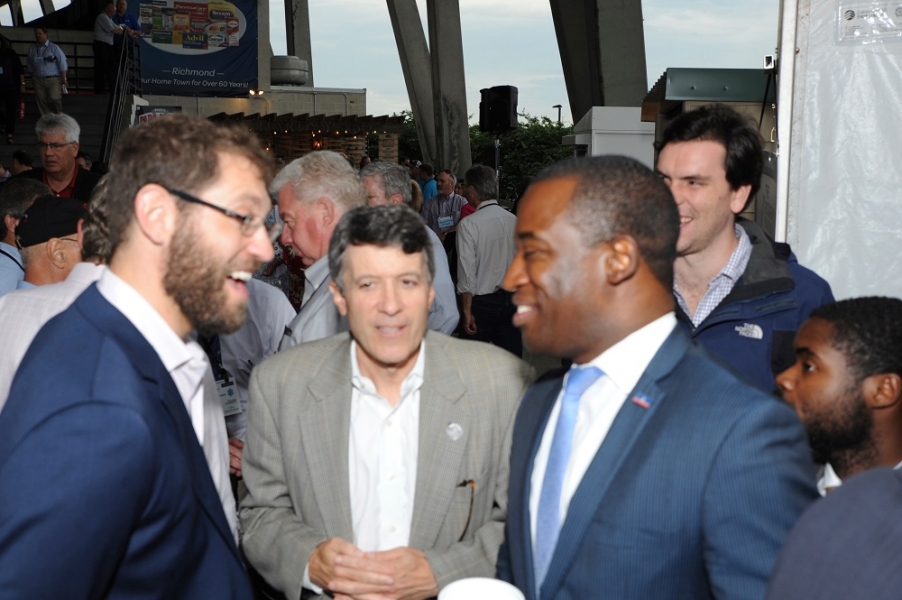 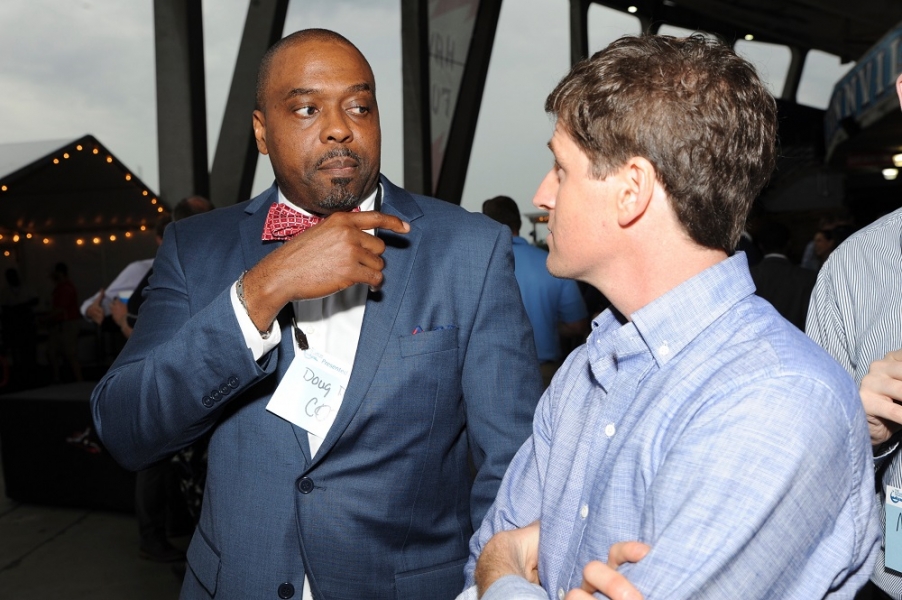 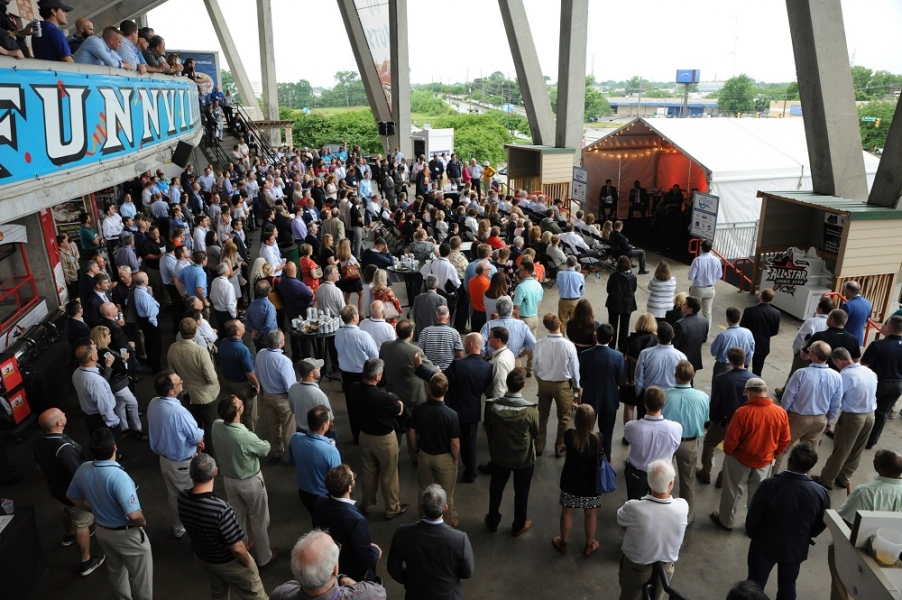 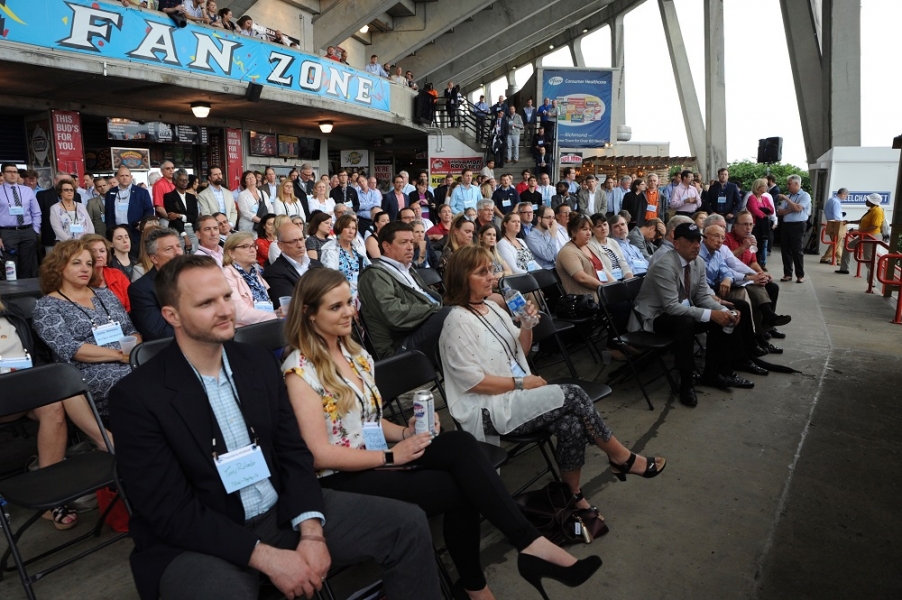 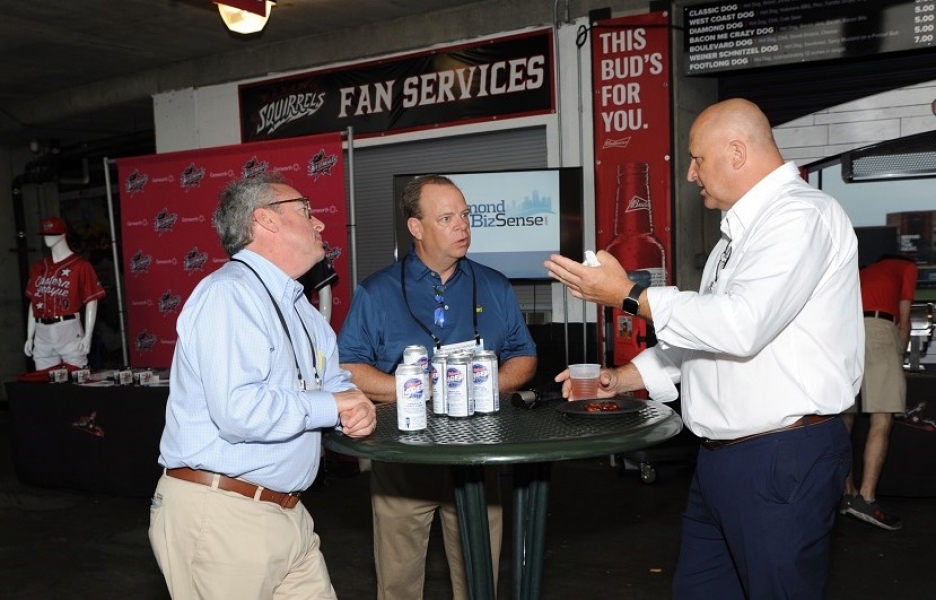 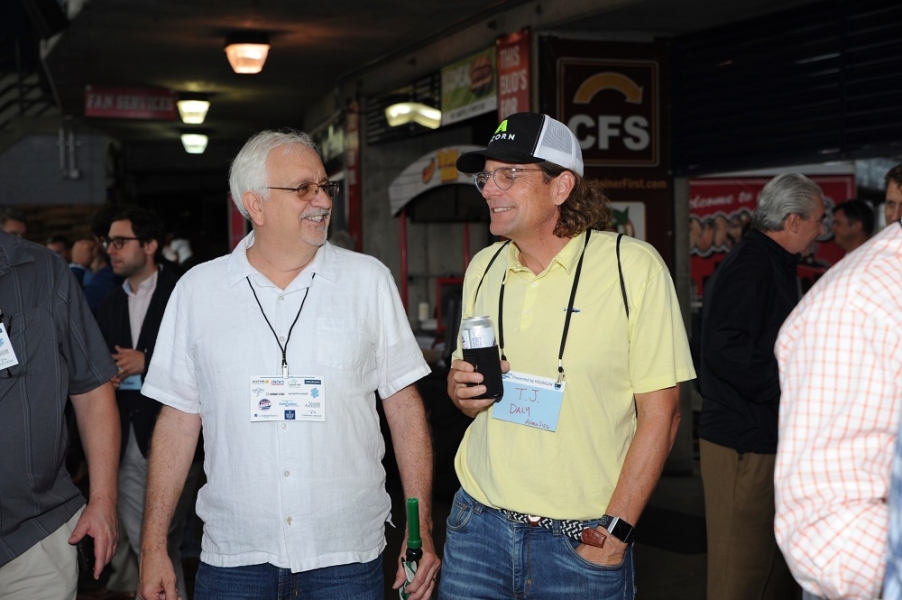 Nutzy the Flying Squirrel was among hundreds of attendees who filled the ballpark’s Funnville Fan Zone plaza for BizSense’s Future Of: The Boulevard event, which featured a panel discussion about the fate of The Diamond and the economic potential of the land surrounding it.

Questions ranged from the development potential and value of the 60-acre city-owned site, which Richmond leaders have eyed for years as a prime location for economic development if the aging ballpark was moved to another site, to the Flying Squirrels’ and VCU’s commitment to a new ballpark, and how the city can go about achieving such projects. 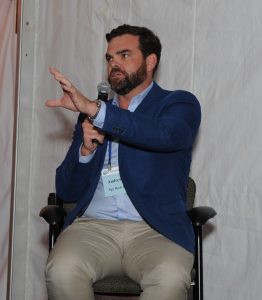 Basham, whose development firm has been active in the booming Scott’s Addition neighborhood across the now-named Arthur Ashe Boulevard, stressed that a firm plan is the first step forward.

“If we can figure out where this baseball stadium is going, the private sector has been chomping at the bit for 15 years to come in here and make private investment in this area, and I believe that will continue,” Basham said.

“I will just say, we have a window. If we take too long to come up with this plan and to move these dominos forward, then we may have to wait another 15 years.”

While a proposal to redevelop the Richmond Coliseum and surrounding acreage downtown has seemingly overshadowed The Diamond as of late, city leaders have been debating the fate of the ballpark and city-owned land there for over a decade, with proposals ranging from a new stadium in Shockoe Bottom to more recent developments that appear aimed at relocating it across Hermitage Road to the site of the Virginia ABC headquarters, which is planning a move to Hanover County.

In 2016, the Flying Squirrels, VCU Athletics and then-mayor Dwight Jones’ administration announced they were working together to relocate The Diamond to free up the 60 acres for a mixed-use development that then would be taxable and give a boost to the city’s tax rolls. A request for qualifications from developers was put out later that year, but no further developments on that front were announced as discussions shifted to the ABC site.

Wednesday’s event – the third in BizSense’s “Future Of” series featuring panel discussions on various industry trends and topics – revisited those earlier Diamond talks while also exploring the economic development potential of not only the ballpark site but also other properties on or near Arthur Ashe Boulevard, particularly in light of the Scott’s Addition boom, where Basham said he’s seen smaller properties change hands in transactions ranging from $1 million to $2 million an acre.

“We’re talking about 60 acres,” Basham said, describing the site as one of only a few along Interstate 95 with that much publicly owned land. Asked the site’s potential development value, Basham reiterated that a plan for what would be built there is needed before such numbers could be determined.

“That will guide the future of how this property is valued and what the next steps are,” he said. 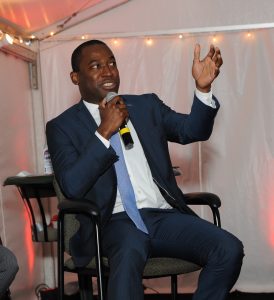 Stoney and Gray, both of whom were elected in late 2016, likewise called for a development plan that reflected not only the city’s priorities but also the wishes of the broader community.

“When I think about these properties, we’re talking about $1 billion-plus (in tax revenue) over the next 20-30 years. Imagine what we could do with that as a city,” Stoney said, listing needs for more housing options, greenspace and multimodal transportation.

Added Gray, whose council district includes the Diamond site, “We need to make sure we are listening to all of the community in any development, in any movement we make with respect to our city assets.”

“I encourage everyone to look at this 60 acres as a central cog to 200 acres of development,” McLaughlin said. “We have to really start looking at this as how are we connecting 95 to Broad Street, and future directions as well.” 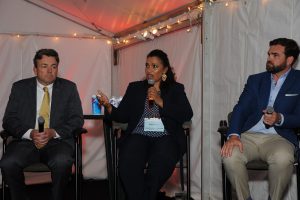 Asked what they would like to see developed in the area, Basham said, “The first thing I’d do is build a new baseball stadium for the Flying Squirrels,” garnering applause and a show of appreciation from Parnell.

“There are a number of examples all over the country where you look at a baseball stadium being an economic driver of a redevelopment of an area that is currently underdeveloped,” Basham said, adding that additional uses likely would mirror those that have arrived in Scott’s Addition: commercial, such as office, retail, restaurants and entertainment venues; apartments and other residential options; and potentially others, such as hotels and hospitality.

Parnell, who acknowledged the ballclub thought it was getting a new stadium when it moved to Richmond nearly a decade ago, said he’d love to see a 360-degree facility where baseball could be played regardless of weather, noting Wednesday’s rain that restricted the event to The Diamond’s main concourse. 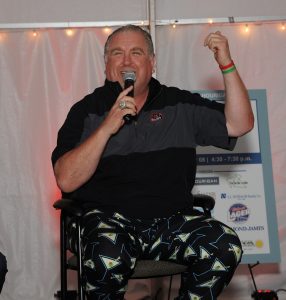 “I said to the mayor, it’d be really cool if we had a space like this in a new ballpark where we didn’t have to worry about the rain being outside, right?” Parnell said, adding, “I mean that friendly.”

“When we came here 10 years ago, we came thinking that we were going to get a new ballpark, and we haven’t gotten it yet. But the thing that I like about it is, we fell in love with y’all, and y’all fell in love with us, and that’s pretty cool,” he said.

“I think the future’s so bright for all of us, because look what we’ve done together as the Richmond Flying Squirrels and our fans – here. Think about the opportunity that this 60 acres lends to what the future holds and all the things that Scott’s Addition has done to be perpetuated on this 60 acres.”

The panel discussion also was live-streamed in partnership with CBS 6. Here’s a recording of that stream in its entirety.

Stadiums do NOT make money or provide real economic development. That has been proven time and time and time again. Especially is small markets. The site does NOT need a stadium to drive demand for its redevelopment. And what the Squirrels want a retractable roof???? This is Double AA baseball. I support a new stadium but lets keep the City Administration OUT it. Let VCU acquire the ABC site and develop and stadium with the team. Also 10 years…this process started before Sept 11, 2001 with the R-Braves considering new stadium proposals and concepts to redo the Diamond that came… Read more »