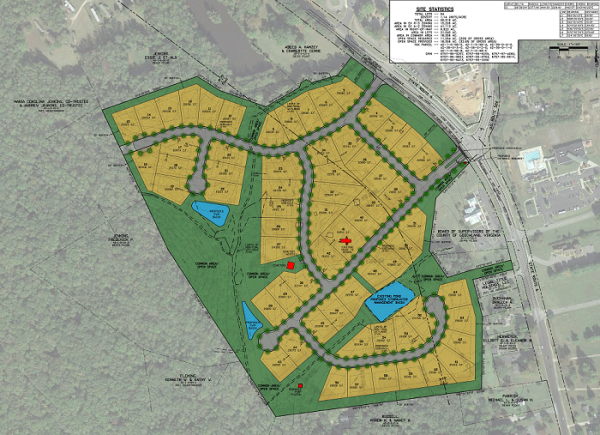 The board voted unanimously in favor of a proposal by Manakin-Sabot-based builder Lawrence Liesfeld to develop 64 home lots on 56 acres located across River Road West from the county government complex.

The county planning commission rejected the project when it reviewed it in February, with members contending the proposed density exceeded what was allowed there in the county’s comprehensive land-use plan.

Liesfeld, working with Andrew Browning of engineering firm Youngblood, Tyler & Associates, maintained that the project did comply with the plan due to the availability of water and sewer capacity that had been added in the area since the plan was adopted.

Originally proposed for 67 lots, the proposal since has been reduced by three homes and revised with proffers that call for doubling the size of a buffer along River Road from 50 to 100 feet, increasing the amount of open space from 11 to 18 acres, adding a requested right-turn lane along River Road and preserving an old house located on the property. 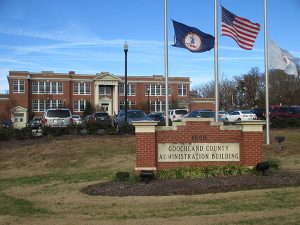 A ‘yes’ vote this time

Browning said several citizens remained opposed to the project, speaking against it in a public hearing as had been the case in February. But this time, the presiding board voted in favor of the project, which Browning described as consistent with the county’s goals for the area through its Courthouse Village Overlay District.

“Being right in the center of Courthouse Village, which they designated for growth, especially residential growth, I think the supervisors saw it our way and agreed that it did comply with the plan,” Browning said, describing the overlay as calling for a walkable, village concept.

“What we’ve proposed is a walkable, pedestrian-friendly community,” Browning said, noting plans for sidewalks and crosswalks connecting the subdivision with the next-door Goochland Branch Library, and the nearby Goochland Family YMCA and Goochland Elementary School.

Consisting of six parcels, the property wraps around the library on the south side of River Road and is largely owned by James Layne, according to county property records.

Liesfeld purchased, through an entity called Reed Marsh LLC, four parcels totaling about 10 acres in December in a multiparcel sale for $400,000. Browning said Liesfeld is under contract to purchase the remainder and should close on those in coming months, as those tracts were contingent on zoning approval.

A county assessment valued those two tracts, totaling about 40 acres, at $666,700 combined.

Browning put the overall project cost, including land and development, at between $4.5 million and $5 million.

He said Liesfeld plans to build about half of the homes, which are required to be at least 1,800 square feet and will be priced in the $400,000 range. Browning said one or more other builders likely would construct the rest, adding that selections have yet to be made.

“We’ve had a lot of interest,” Browning said. “We haven’t committed to anyone. Right now, we’re focused on trying to get the construction plans approved, as there’s quite a bit of work that we have to do.”

That work includes upgrading a nearby traffic signal and other infrastructure improvements involving an onsite pump station and offsite utilities. Once those projects are done, Browning said construction plans could be approved this fall and houses could start going vertical by year-end, with the first homes completed by next spring.

Liesfeld’s other developments in the area include the Enclave at Bacova, a 23-acre section of the 165-acre Bacova development along Interstate 64 in Short Pump.

Meanwhile, Goochland planners are reviewing another residential development proposed in the county’s Centerville area. A community meeting is scheduled May 20 on Main Street Homes’ plan for up to 157 homes on a 98-acre site between Manakin and Rockville roads. The meeting will be held at the Goochland Branch Library from 6 to 7 p.m.