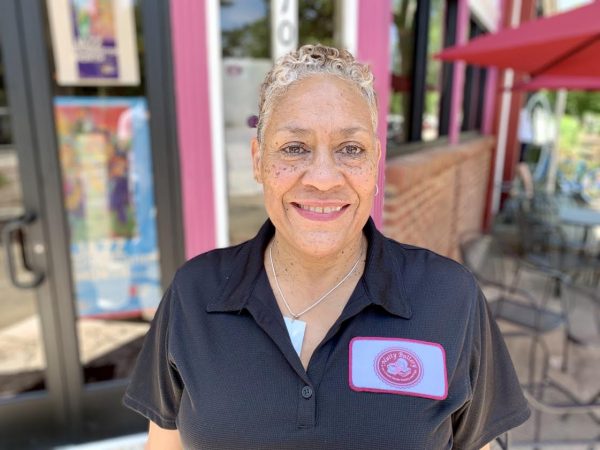 It’s been a tough nut to crack for Charleen Baylor.

But after a few years of trying, her dream of owning her own restaurant and business finally has been realized.

Baylor’s Nutty Buttery Ice Cream Parlor, Pantry and Cafe is now open at 701 W. Clay St. near the intersection of Munford and West Clay streets in the Carver community.

The restaurant held its soft opening May 18 and is planning a grand opening later this month. 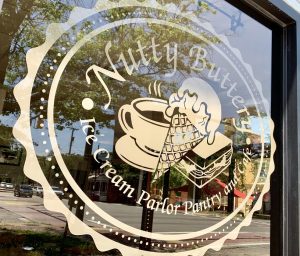 Nutty Buttery is now open at 701 W. Clay St. in the Carver community.

The 1,200-square-foot spot seats 52, and serves ice cream, burgers, sandwiches, salads, steak and salmon, and is open for breakfast, lunch and dinner.

Some of its signature items include “The Carver,” a 4-ounce ground turkey burger, and its wings that are mixed in a patron’s choice of buffalo, teriyaki, Caribbean Jerk Dry, Thai chili or tango mango sauce.

Nutty Buttery will serve a variety of ice cream flavors made by Bev’s Ice Cream, along with coffee, teas and housemade lemonade.

For breakfast, Nutty Buttery will serve up French toast, avocado toast, yogurt parfait and its breakfast sandwich, which is served on either a biscuit or croissant with the patron’s choice of cheese (cheddar, Swiss, provolone or havarti); and meat (sausage, bacon, turkey bacon or turkey sausage).

An ABC license for beer and wine is pending, Baylor said.

The name Nutty Buttery is a play on words: Nutty, a visual of old-fashioned nut-filled candy and goods, and Buttery – the medieval-era term for great storage room. 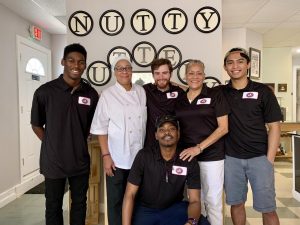 Nutty Buttery’s staff pose in the dining area of the restaurant Tuesday afternoon.

But it also holds sentimental value for Baylor, as it’s a throwback to her family’s entrepreneurial spirit.

“My grandfather had a bakery in Ashland, and he had this big showcase that had all kinds of candies, so I always wanted to bring that concept here,” she said.

To commemorate her late grandfather, Newton Lightfoot, Baylor has established a small buttery in the restaurant that’s filled with candies and fresh nuts.

“I have my own special-made trail mix that I’ve included,” Baylor said. “It’s all raw, no salt; and I chop up my own dried apricots, as well as raisins and cranberries. As I get more containers, I’ll be able to offer more.”

In another corner of the restaurant, Baylor pays tribute to her great aunt, Alice Louise Trottier, who owned Al’s Beauty School and Salon, and the Quick Meal Coffee Shop in Ashland, with a variety of items from businesses and home. 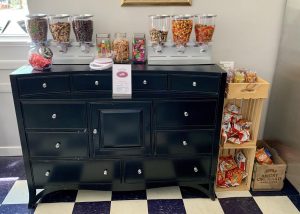 The buttery area features a selection of nuts and candies for purchase.

“She meant so much to me and I was able to learn a lot from her as a businesswoman,” Baylor said. “That took guts back in those days.”

Baylor’s hope for Nutty Buttery is to become a community gathering place by making the establishment a neighborhood showcase.

A stage nestled in the corner by the bar will host live jazz music every fourth Sunday from 4-8 p.m., along with live poetry sessions and other performers, Baylor said. She’s seeking a variance from the city to extend Nutty Buttery’s operating hours to 11 p.m. on weekends to accommodate live music.

Nutty Buttery also will include rotating art that can be purchased from local artists. It also looks to partner with community groups and organizations, having launched during its soft opening a fundraiser for Carver Elementary that raised $720 for the neighborhood school.

The store also will host the Carver Area Civic Improvement League meetings every third Monday of the month. 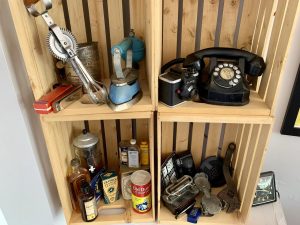 Getting Nutty Buttery to the finish line proved difficult for Baylor, a long-time resident of Carver.

After announcing her plans for the shop about three years ago, a disagreement with her former contractor, E. Pendleton Construction, delayed her opening date.

Baylor filed suit against the construction company last summer, and was awarded a $14,000 judgement against Pendleton on June 3, according to court documents. She later secured Cecil Nedrick of CLJ Construction to complete the renovation to former retail space.

Pendleton and his attorney Alexander N. Simon could not be reached for comment Wednesday afternoon.

“It was a process that nearly broke me, and certainly broke my spirit because I wanted to be open before now,” Baylor said. “But we’re here now, and I’m looking forward and keeping what happened in the past in the past.” 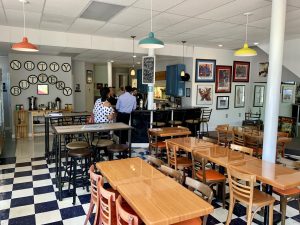 Opening Nutty Buttery comes after Baylor’s nearly 30-year career in the medical industry, first as a respiratory therapist for hospitals across Virginia and Maryland; including as director of respiratory care for Bon Secours’ Richmond Community Hospital in Church Hill and Memorial Regional Medical Center in Mechanicsville.

It’s a welcome change for Baylor, who said she’s excited about living and now owning a business in Carver.

“There is so much to love about Carver and Richmond,” Baylor said. “The opportunity to be a part of this community, and to provide a space for the community, is everything that I wanted Nutty Buttery to be.”

Absolutely wonderful story, and enticing yummy foods. Especially love the hommage paid to family. Massive congratulations. Looking forward to patronizing. Wishing you much success and joy in the journey.

I happened to walk by one Sunday while Charleen was working on the the build-out, and she invited me in and shared her story. Weeks later, I was walking again and just happened to be her first official customer. Charleen and her staff could not be nicer, and the Nutty Buttery is a bright spot in Carver. I’m so happy she is chasing her dream. She deserves all of the success she gets.

So if you eat ice cream to help the community business, the calories don’t count, right?

Going to stop by this weekend for dinner. Looking forward to trying the place!

Congratulations, Ms. Baylor, from your neighbors in Newtowne West! It sounds like Nutty Buttery has all the makings of a true community gathering place. We look forward to visiting you and hope to make it out for your grand opening later this month!