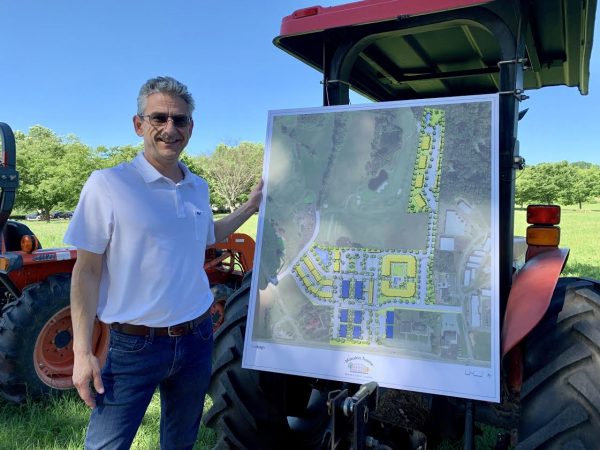 Scott Gaeser’s Towne & Country Partners is proposing to build Manakin Towne on 24 acres it owns along Broad Street Road in Goochland County. It would be the county’s first mixed-use development. (J. Elias O’Neal)

Gaeser’s group, which includes local investment group James River Capital Corp., owns a total of 37 acres that wrap around a portion of the Sycamore Creek Golf Course with primary frontage along Broad Street and Manakin roads. 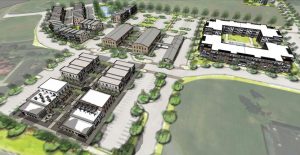 Manakin Towne is proposed for about 24 acres off Broad Street Road in the Manakin-Sabot section of Goochland County. (Renderings/elevations courtesy 510 Architects)

While Manakin Towne’s initial phase calls for building out about 24 acres for the mixed-use development, Gaeser said another 15 acres east of Sycamore Creek Golf Club’s clubhouse could be developed at a later date.

Gaeser is seeking to rezone the 24 acres to fit within the county’s Centerville Core Village mixed planned unit development district that the proposed Manakin Towne development falls within.

The Goochland Board of Supervisors approved the mixed-use district in April 2012, with the purpose of encouraging a mix of residential and commercial uses within one of Goochland’s most active development areas.

The core village designation applies only to the area bounded by Manakin Road to the west, parcels abutting Broad Street Road and Plaza Drive that are east of St. Matthews Lane to the north, Ashland Road to the east and Saddle Creek Parkway to the south.

Gaeser’s site is currently zoned B-1, which allows for general retail uses such as banks, movie theaters and restaurants.

As part of the special-use permit process, Gaeser submitted a master plan of the site, along with subsequent studies, maps and renderings used in planning Manakin Towne.

Gaeser has envisioned Manakin Towne for 20 years. He recalled when he and his children would come to the site to water the zelkova tree saplings, which since have matured, lining the entryway of the future development.

Taking note of the continuing development moving over the Henrico County line into Goochland and creeping up to Route 288, Gaeser and a group of investors purchased the Manakin Towne site in 2001.

“We’ve held on to the property for years, with the idea of doing a commercial shopping center. But once the mixed-use district was created, we thought it was a better overall use for the village and this property,” Gaeser said while recently driving around the property. “But just look at these views … Could you imagine the back of a shopping center facing that view of the golf course? This is the setting for a village.”

To ensure the 24-acre site remains walkable and attractive to a variety of commercial and residential users, Manakin Towne is to be developed in phases.

The first phase includes the construction of Manakin Row, the largest of the residential buildings in Manakin Towne.

The first phase includes the construction of Manakin Row, the largest of the residential buildings in Manakin Towne that would include two three-story buildings housing about 150 one- and two-bedroom units. The development would include a pool, clubhouse and recreational area.

Gaeser said his group is determining whether to rent the Manakin Row units or make them for sale.

That phase also would include another 66 for-sale residential units – dubbed The Flats – to rise on the far northeast side of the development. A 10,560-square-foot retail center, and a two-story, 12,400-square-foot mixed-use building with about 6,200 square feet of ground floor retail and condos above is planned along the development’s main entrance at Central Park Drive.

A central park housing the existing Manakin farmer’s market also is planned, along with parking, walking trails and sidewalks, in the first phase.

“The first phase is significant because of the demand for residential development in the area,” Gaeser said. “We want this to be reflective and inclusive of the community. We are willing to make any required improvements to make this a reality.”

A 39-unit townhome section called The Townes is included in a later phase.

Subsequent phases call for additional office and retail space to follow as demand warrants. A 39-unit townhome section called The Townes also is included in a later phase, as are several pocket parks, open spaces, a dog park and central promenade with tree-lined walkways and seating abutting the retail and office sections.

Richmond-based 510 Architects have been retained as Manakin Towne’s architect, while CiteDesign is overseeing the project’s landscaping design. Townes Site Engineering is the civil engineer. A builder for the townhomes and other residential components has not been selected, Gaeser said.

Pending public comment and recommendations from the county’s planning commission, the Board of Supervisors could vote on the development in September, with construction beginning during the first half of 2020, Gaeser said.

A community meeting outlining plans for Manakin Towne will be held this evening (June 18) from 6 to 8 p.m. at Fire Station 3 on Broad Street Road.

“With the exception of the Food Lion down the street, there really isn’t much out this way,” Gaeser said. “Manakin Towne looks to create a true gathering place for the village … all while delivering what we think is a quality mixed-use project with a good mix of residential and commercial uses.”

A variety of office and retail spaces are also being envisioned. Click to enlarge.

This could be a real asset to the community if it’s handled properly — high quality construction, energy efficiency, and smart designs. We look forward to Scott’s presentation.

Some of that is currently happening. The old Lawrence Dodge site is getting torn down as we speak for stacked townhouses. Libbie Mill is coming out of the ground to compliment the work done at Willow Lawn.

But an important note about this situation is the reality of Virginia. This is two different counties and Goochland is sure not going to turn away an investment that could have gone back to an area of Henrico. It is the same thing the counties did to the City.

They’ve owned the land in Goochland since 2001. It seems reasonable that they would want to make use of it.

I live out here. I haven’t made up my mind but…
“Citizens contended that Manakin Towne is little more than an extension of Short Pump congestion and want no part of it.” https://goochlandomm.blogspot.com/2019/06/village-people.html

I suppose it was just a matter of time before the urban sprawl and over development crept up from Short Pump. Empty storefronts and strip malls, inadequate infrastructure, more traffic, and higher real estate taxes will be the dubious benefits for Goochland residents.