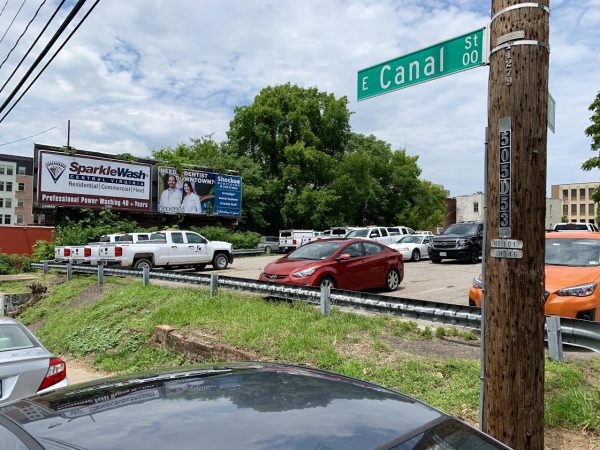 Thirteen contiguous lots of surface parking near the corner of East Canal and South First streets is under contract with a unnamed group of buyers seeking to rezone the site and build and apartment building. (Photos by J. Elias O’Neal)

Another surface parking lot in the Monroe Ward section of downtown has caught the eye of developers.

A group of buyers is seeking to rezone a cluster of 13 contiguous lots at the corner of South 1st and East Canal streets to the city’s TOD-1, or transit-oriented nodal district designation, which allows for taller, midrise development of up to 12 stories.

Jennifer Mullen, an attorney with law firm Roth Jackson who is representing the unidentified buyers, said the group is planning an apartment project for the site. 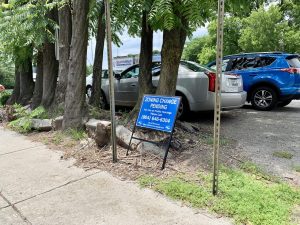 The city’s Planning Commission recommended the 0.65-acre parking lots be rezoned TOD-1. The City Council will vote on the rezoning June 24.

They sit on an elevated block that overlooks the Downtown Expressway and across First Street from the Matrix Midtown apartment building.

The lots have been under contract since late last year, said Fred Jones, owner of W.C. Hutchinson Real Estate Inc., which manages the site for a trio of property owners, including a business entity managed by local attorney Jack Pearsall.

The buyers have retained Spencer Grice, an architect with Richmond-based SMBW, to design the apartment project, Mullen said. However, details about the proposed apartment building, including its height and number of units, remain in the works.

The purchase of the property, which has sat mostly vacant for 45 to 50 years, is contingent upon the rezoning of the site, Jones said.

While a price for the 13 lots was not publicly released, the lots most recently were assessed at a combined $1.2 million.

Members of the city’s planning commission on Monday recommended the proposed rezoning move forward. The City Council will vote on the request at its June 24 meeting.

City planners have marked this section of downtown for higher density since 2009 as part of its Urban Center Area Downtown Plan and, more recently, its Pulse Corridor Plan — each encouraging a mix of residential and commercial uses.

And it has been picking up steam recently, with Eagle Construction of VA submitting plans last week for 21 townhomes on a nearby surface parking lot at 1 E. Main St.

I am glad the surface lots are finally being taken up. The one thing I hope is that there is some type of courtyard or “public space” with some of these projects. Pocket spaces add a lot to the fabric of a city. They don’t have to take up much area, but can actually add a lot to each project and the surrounding area, especially if any of them are a mixed use development.

Good place for a tall building

Will this help us address our increasingly diminishi g access to parking downtown? We have some serious short sightedness with our downtown oarking situation as we continue to grow and build.

Ashley, downtown needs less parking, not more. With more density the area can be more walkable and support alternative transit methods (ex. Mass transit, biking, etc). Surface parking lots are the lowest use of a piece of property and hopefully they all disappear downtown within 15-20 years.

As a longtime resident of the city I can confirm that the parking shortage has grown significantly worse in recent years. Richmond is being flooded by a wave of new residents who are moving here because they claim they love the walkability and hate the hassle of maintaining a yard, yet they all own cars and they all own dogs.

Tim: Wanting to live in a walkable area and owning a car are not mutually exclusive. Richmond is neither dense enough or laid out in a way where it is convenient for people to live and work simply by using mass transit. As a country we do a lot to make car ownership inexpensive (having a low gas tax, subsidizing roads with sales/income taxes, inexpensive/subsidized parking provided by employers, etc.), which does not encourage less car ownership, either.

Hopefully this is a transition period, because you really can’t live without a car yet, but there are too few parking spaces.
We need availability to grocery stores, (or deleivery services to be more popular) to make urban areas more liveable.

So far all of the infill developments I’ve seen, such as the one at Cary and Shields or Robinson Alley, have involved the construction of hardiplanked luxury townhouses. I would find the argument in favor of infill development much more compelling if more of the surface lots were being turned into public green spaces or affordable housing. This assertion that investors must get rich with new construction projects to ensure the greater good for all leaves a bad taste in my mouth.