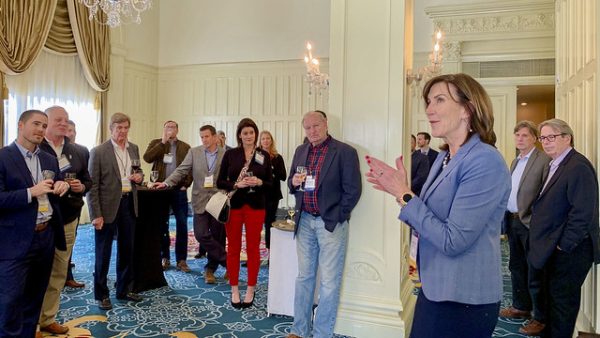 Chesterfield County supervisors chairwoman Leslie Haley welcomes consultants at the forum on behalf of the GRP board. (Photos courtesy GRP)

In their efforts to entice economic investment in the region, area business recruiters are increasing their engagement with the middlemen often involved in the process: site selection consultants.

Earlier this year, metro Richmond played host to more than 20 site selectors from across the country who took part in a forum put on by Area Development, a national magazine focused on corporate site selection and relocation.

The three-day conference – one of five the magazine puts on each year in different locations around the country – was recruited to the region by economic development groups Greater Richmond Partnership and Virginia Economic Development Partnership. 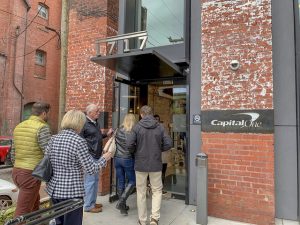 Economic developers from across the state were able to get one-on-one time with attendees, who were also toured around business and food-and-beverage hot spots such as the 1717 Innovation Center, Sub Rosa Bakery, Perch RVA and The Veil Brewing Co.

Where GRP traditionally hosts individual site selection consultants on a quarterly basis in coordination with GRACRE, the Greater Richmond Association for Commercial Real Estate, the forum – held in late March and early April at The Jefferson Hotel – aimed for more impact with about two dozen consultants in town all at once.

“Since we essentially bought out the conference with all of our Virginia partners, the ratio of Virginia people to consultants was pretty darn high, so they got a lot of great intel and information about the entire state of Virginia,” said Jennifer Wakefield, GRP’s senior vice president of marketing.

“There are about 400 site location consultants, or site selectors, in the country,” she said. “When we have a good relationship with a consultant, we’re not just potentially touching one company; we’re potentially touching several different companies. And they work oftentimes in several different sectors, so if we have a good relationship with these people, we know who they are, that behooves us.” 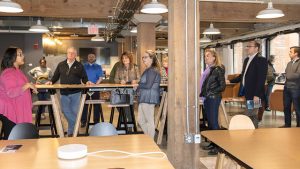 1717’s Rasheeda Creighton leads a tour of the innovation center.

Wakefield said the forums had been on her radar since she helped host one in Florida in 2009 during her time with an economic development group in Orlando. This recent conference was the first held in Virginia, she said.

The event came just months after GRP reported results of a third-party study that found that nearly half of about 150 C-suite executives surveyed said they didn’t know enough about the Richmond region to answer questions about its economic strengths and attractiveness. The study was conducted last October by Development Counsellors International, and surveyed executives and site selection consultants in the U.S. and Europe.

Michael Ivey, GRP’s marketing and communications director, said an answer to that is getting more site selection consultants in town to increase their awareness and have them keep the region in mind when suggesting potential sites to their clients.

“The biggest trick is to try and get these site selectors in town, so that they can experience Richmond and have a positive perception of the region,” Ivey said. “This conference was just really a culmination of that. Instead of having one or two quarterly, having 20 at one time and being able to show and scale our regular visits up, it’s just a very successful way of doing it.” 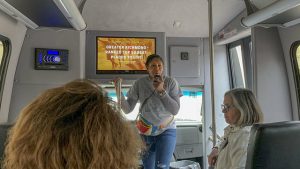 Wakefield said the conference resulted in at least two potential projects that are in discussions, on top of the general awareness of Richmond as an attractive business location. A second conference has been scheduled next year: June 2-4 at The Jefferson.

“Since they work with C-suite executives, you have one good relationship with a site location consultant, it’s an unlimited number of potential companies that you can touch,” Wakefield said. “I think Richmond is going to be on the list, at least for these 20 consultants, when they’re considering potential places to look at suggesting for their clients.”

One such success story was emphasized at a recent gathering of GRP investors, who heard from Fatima Halimi, a site selection consultant with Montreal-based CAI Global who represented Cascades, a Canadian packaging and tissue products producer, in its $40 million purchase and planned investment of up to $300 million in the Bear Island paper mill in Hanover County that White Birch Paper idled in 2017.

Called Project Neptune until the deal was finalized last year, the Cascades investment and conversion of the facility that’s planned to reopen in 2021 and employ 140 workers was the result of local relationships made through previous economic development deals, Halimi told the group. 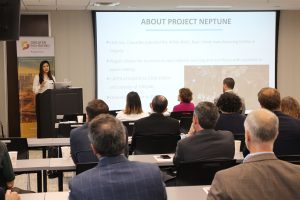 “What was great about our site search in Virginia for Project Neptune was that we already had contacts locally from previous projects,” Halimi said. “We were able to send the RFI (request for information) to the GRP and also VEDP, and then eventually we were introduced to Hanover County Economic Development.”

Halimi said the search started with sites in 17 states and was narrowed down to 18 sites across nine states before Bear Island was selected. She said the Hanover site and Richmond as a region ranked high in all three categories Cascades considered: business environment, workforce and the facility.

“We had the raw materials, and of course the incentive package helped,” Halimi said, referring to a $1.95 million grant awarded for the project through the Commonwealth’s Development Opportunity Fund. “The workforce was great; it was right there onsite and had the exact expertise that the client was looking for. 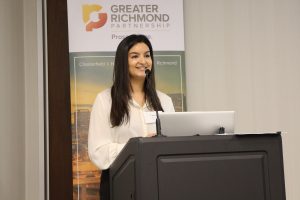 ‘Everything lined up to make Richmond the perfect location for Cascades,’ Halimi told the group. (Jonathan Spiers)

“And in terms of the building, it was exactly what they were looking for: an idled paper mill, and there is equipment in there that they are going to be able to convert to be able to use,” she said. “Everything really lined up to make Richmond the perfect location for Cascades.”

Reiterating the relationships formed from her previous work in the region that played a part in landing the project, Halimi said: “This is why we really value our relationships with the local economic development communities, because you really are the ones to make the process enjoyable for us and our clients.”