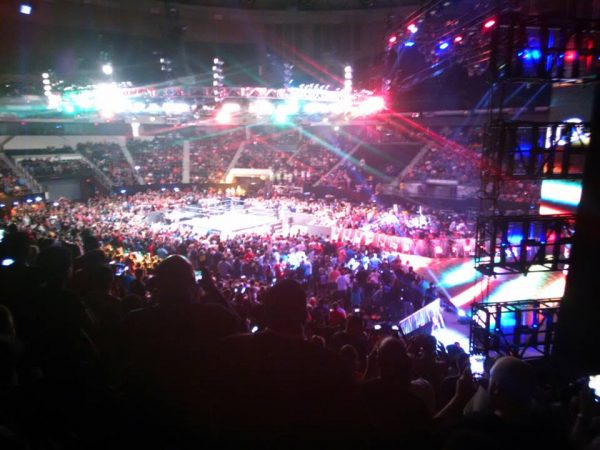 A WWE event at the Coliseum, traditionally the promotion’s go-to local venue. (Photos by Jonathan Spiers)

As this year’s quiet closure of the Richmond Coliseum has sent events traditionally held there to alternate venues, one of Central Virginia’s newest arenas has taken the opportunity to wrestle away one of the region’s more frequent touring attractions.

The 3-year-old VSU Multi-Purpose Center, home of the Virginia State University Trojans, plays host this Saturday to World Wrestling Entertainment, the pro wrestling promotion that for decades has called on the Coliseum as its local venue of choice.

With the nearly 12,000-seat Coliseum now closed and eyed for demolition as part of a downtown redevelopment plan, Victor Landry, VSU MPC’s general manager, said his 6,000-seat, multipurpose center saw an opening to pick up WWE’s business while giving the promotion another place to play locally. 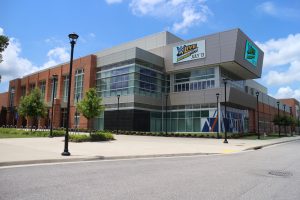 “The greater Richmond area has always been a strong market for WWE, and we of course here at the venue are always looking for programming mix,” Landry said. “I think that us reaching out to them, them looking to play the market, we were able to make all the stars align to get this thing here at the venue.”

While the event – part of WWE’s SummerSlam Heatwave Tour – is a one-off for the center, the venue is hoping more wrestling shows come its way as a result, based on its seating capacity and production capabilities.

Landry noted such events bring with them additional economic impact that can carry over to businesses in the Tri-Cities area. He said such impacts were a driver in reaching out to WWE, along with the goal of picking up where the Coliseum left off.

“There’s the philosophical approach where we’re making sure that the greater Richmond area can still enjoy the same shows that they always have, and then there’s the financial side, where we’re looking for those shows that come in and generate revenue and economic impact for the community,” Landry said.

“In addition to the local fans, there are also fans who travel from as far as the Carolinas south and as far north as the D.C. area. When those folks come here, they spend money in our hotels here, our restaurants here, helping generate economic impact for the Petersburg/Tri-Cities/greater Richmond area.” 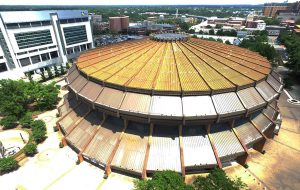 The Coliseum has been closed since the start of the year. (BizSense file photo)

Such impacts are what critics of the Coliseum’s closure have said Richmond is losing out on so long as that arena remains shuttered. The nearly 50-year-old arena’s doors were closed at the start of this year, the result of a decision by management company SMG and the City of Richmond to stop booking events after 2018.

The closure coincided with NH District Corp.’s proposal to demolish the Coliseum as part of its $1.4 billion Navy Hill redevelopment project, which would replace the arena with a new venue as part of a 10-block revitalization. While endorsed by Richmond Mayor Levar Stoney last fall, the project has yet to be formally proposed to City Council as negotiations between the group and the city continue.

The uncertainty surrounding the Coliseum’s fate led to several events getting booked elsewhere. The Richmond Roughriders arena football team left for Wheeling, West Virginia, and other events such as VCU’s spring commencement ceremonies and Amway conferences were moved to the Greater Richmond Convention Center.

In addition to Saturday’s WWE event, VSU MPC picked up another event that otherwise would have been held at the Coliseum: this year’s Freedom Classic Festival basketball game, which was held Jan. 19.

Such additional events add revenue for VSU, which receives the proceeds from the 100 or so events the venue hosts each year. Landry would not disclose specific revenue numbers but said he’s hoping to add about 50 more events annually, in part from business picked up from the Coliseum.

The 6,000-seat multi-purpose center is home to the VSU Trojans. (Courtesy Spectra)

“A lot of the shows that have played the Coliseum, since the Coliseum is no longer (an option), I think all of the venues in the area are trying to fill up,” he said. “We’re specifically going after the ticketed ones, trying to get them in the building. So far, this makes two that we know would ordinarily play the Coliseum, but we’re looking to get more in here.”

Landry and his team are employed by Spectra, the Philadelphia-based management company VSU enlisted when the center opened in 2016. The $84 million center is the home court for VSU Athletics, and also hosts annual shows and private events and banquets.

Meanwhile, the fate of the Coliseum remains a question mark as the Navy Hill talks continue. In May, a project to enhance a stretch of Leigh Street beside the Coliseum received funding priority from the state, though it’s unclear how that plan would work with NH District Corp.’s proposal to fill the sunken part of the street beside the arena with debris from its demolition.

It’s a shame the City of Richmond let the Coliseum fall into disrepair. Venues like Hampton Coliseum and Scope continue to thrive at the same age as RC.

While I understand your point about the situation in Richmond, you’re quite wrong about the examples you cite. With the exception of minor league hockey, Norfolk Scope has lost most of it’s business to ODU’s Constant Center. Hampton Coliseum rarely hosts big concerts coming through the state, which instead are going to the Va Beach Amphitheater or JPJ arena. While both are still open and functioning, they are hardly thriving. Bottom line is that these older dungeons aren’t very relevant in comparison to the new modernized venues that offer so much more to both the entertainers and the attendees. Richmond… Read more »

I agree – Good for VSU. As someone who routinely attends concerts, however, I would put the Coliseum on exactly the same footing as Hampton and the Scope. The seating is horrible, the amenities are horrible, and the acoustics are terrible. The difference between those venues and ones like JPJ in Charlottesville or Verizon in DC are like night and day.

What a joke! A city the size of Richmond and we can’t even get a decent coliseum/arena in our city! We keep losing millions of dollars in entertainment revenue/impact. Other cities in America can negotiate getting arenas built (take a look at the Staples Center in LA or the Capital One center in Washington DC) without the use of public tax dollars – but we can’t? It’s so embarassing!

Millions of dollars? Coliseums don’t make money. Period. They all are subsidIzed. Staples Center was built on city owned land. And LA issued $70 million in bonds funded by TIF for their entertainment district . Difference is they have the size and market to repay their bonds. And What are you people talking about. LA has 14 million people; DC has 6.5 million. Richmond is about to pass 1.5 million. If we got a new Coliseum, we might get some of JPJ shows but sorry Beyoncé is coming to open it up. And for those belittling Norfolk and Hampton, Roanoke… Read more »

Staples Center was privately financed to build it – and they ended up securing corporate sponsors to help. Sadly, our city leaders could never negotiate something like that. If they tried, our city would get so screwed over. A modern coliseum/arena/stadium draws events – which gives huge economic impact. And it is in the millions that we’re losing in Richmond. Think of all the sporting events we lose out on – A10 tournament (the A10 won’t even look at the Richmond Coliseum), NCAA tournament games (good luck getting the NCAA to play in the Coliseum when VCU won’t even consider… Read more »

Staples Center is a part of LA Live and entertainment district that was financed several times over several years with public dollars to expand the complex and make it better. Yes private funds built the center with promise of redevelopment around the center paid for with public funds. Articles from 1997 today talk about this grand deal that has cost LA taxpayers millions.

Another black eye for Richmond. Citizens get what they pay for when electing mayors with no real world business, economic, or management experience.