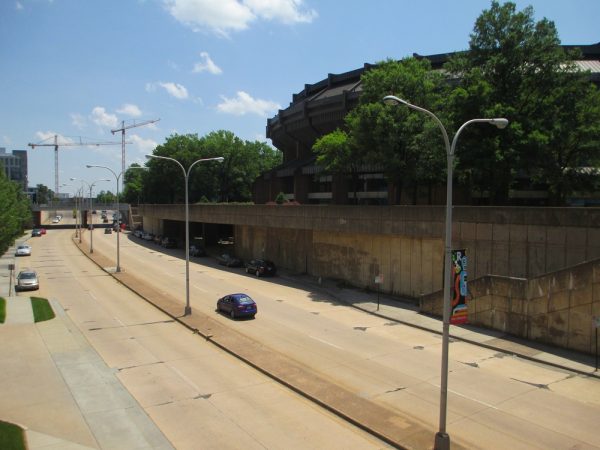 The below-grade section of Leigh Street beside the Coliseum. (Photos by Jonathan Spiers)

As Richmond City Council prepares to kick the tires of the latest Navy Hill development proposal, one component of the project previously described as integral to its success is no longer among the plans to be reviewed.

The $1.5 billion proposal by local group NH District Corp. to replace the Richmond Coliseum and redevelop a 10-block area beside it is devoid of a previously pitched plan to regrade part of Leigh Street where it dips below street level beside the nearly 50-year-old arena.

The regrade, projected to cost $24 million, was described in the group’s original proposal submitted to the city last year as essential to the larger development, providing better walkability and connectivity downtown, and facilitating a planned office building and apartments that would rise beside a new arena.

It also was pitched as a cost-saving measure that would have used debris from the demolished Coliseum as fill to bring the southern half of Leigh Street back to grade. The approach was projected to save about $3 million in fill material that otherwise would have needed to be trucked in.

However, the regrade plan, which relied on state transportation funding, was scrapped from the revised proposal presented this month, due to potential funding not lining up with the proposed timing for Navy Hill, said Jeff Kelley, a spokesman for NHDC. 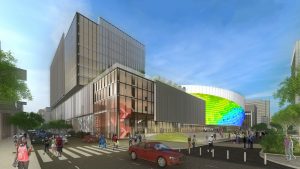 A new rendering of the proposed arena. (NH District Corp.)

The group originally proposed that the regrade could be funded through the Virginia Department of Transportation’s Smart Scale prioritization program, which maps out projects across the state to be funded in the next six years. NHDC’s plan was for the city to apply for $24 million to fund the regrade, contending that the project would score highly in prioritization categories such as accessibility, economic development and land use coordination.

But the potential allotment of the funds, if they were awarded at all, didn’t sync with the group’s proposed demolition and construction schedule, Kelley said.

“The timing for state funding for the Leigh Street regrade did not line up as expected in our proposal,” Kelley said. “A full engineering and design effort is needed to determine the cost of this idea. This doesn’t mean the regrade won’t ever happen, and it may at a later time.”

Kelley pointed to other connectivity improvements that still would go forward if Navy Hill is approved. Those include reopening and extending Clay Street between Fifth and Seventh streets, extending Sixth Street to Clay Street, and other vehicular and pedestrian improvements in and around the 10-block project area bounded by Fifth, Leigh, 10th and Marshall streets.

But the scrapping of the regrade – described by NHDC in correspondence with the city as “a backbone to the overall district development” – raises questions as to how certain parts of Navy Hill, or the development overall, ultimately would play out.

When NHDC submitted its original development proposal to the city in February 2018, it asked the city to submit a Smart Scale application specific to the regrade the following month, making it eligible for the program’s next prioritization round. Funding allotments through that process were finalized this spring.

In its original proposal, the group told the city, “Time is of the essence for this as funding for these projects occurs on a specific yearly cycle that includes necessary City action prior to developer selection.”

By the time NHDC responded to city questions about Navy Hill and the regrade in May 2018, the city was a month away from finalizing its list of projects to be submitted for that round of Smart Scale funding. City Council adopted that list – which included a separate Leigh Street project specific to streetscape enhancements – in June 2018.

The list did not include the regrade project as NHDC had requested.

Matt Welch, a senior policy advisor to Mayor Levar Stoney who’s been representing the city in negotiations with NHDC, said the regrade project was not included on last year’s Smart Scale application list because it was not identified in an analysis that started years before.

“The City focused its 2018 Smart Scale application on its then-current assessed needs determined through analysis conducted between 2016 and early 2018,” Welch said in an email.

“Moving forward, the City will work collaboratively with Navy Hill to pursue potential funding from the state or other entities as best benefits the City’s needs.”

As originally proposed, the regrade would have involved bringing the southern half of Leigh Street between Fourth and Eighth streets back to grade, while the northern half of the street would remain below grade to provide basement-level access to the new arena and the nearby Virginia Biotech Park. 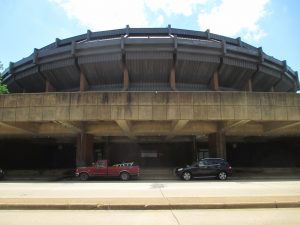 The below-grade stretch provides underground access to the now-shuttered Coliseum.

The regrade was pitched as essential to not only the Navy Hill development but also that area of downtown in general.

“Community members, urban bloggers, and city planners generally agree that Leigh Street must be brought back to grade at this location to truly connect the Virginia Biotechnology Research Park and the VCU Medical Center to other areas within the City center,” the original proposal reads.

In its responses to the city’s questions last year, NHDC said the regrade was necessary to be able to construct a planned office building beside the new arena and apartments that would envelop a nearby parking deck on the other side of Seventh Street.

Referring to the build-to-suit office or research building, NHDC said in its responses, “For this development to be feasible, Leigh Street must be brought to grade and be integrated with the Biotechnology Park to the north.

“The success of (the office building) is important to the feasibility of the Project due to its forecasted tax revenue contribution in servicing the bond payments for the new Arena,” the group said, referring to debt service on about $350 million in non-recourse revenue bonds that the city would float to fund the new arena.

“For similar reasons,” the group added, “should Leigh Street not be brought back to grade, we would not be able to build about 30% of the apartment units planned for Block B (those planned along Leigh Street).”

The negotiated proposal presented earlier this month refers to Leigh Street only in regard to planned reconfigurations of its right-of-way to facilitate construction of those apartments, a planned GRTC transfer center and other structures bordering the street. The office building site is not listed among them, though it remains reflected in the proposal’s master plan.

Not off the table

While not included in the proposal presented this month, correspondence between the city and NHDC during their negotiation process indicate the regrade plan is not completely off the table.

In its responses last year, NHDC said Leigh Street still could be elevated and incorporated into the development at a later date, and potentially funded through future Smart Scale rounds.

“We remain committed to helping the City explore the funding of this project through options such as Smart Scale, as we believe it is the appropriate funding source of a project of this nature,” the group said. “We are currently exploring various timing scenarios that would fund the project at the time of the Arena bond sale, potentially reimbursed through a successful Smart Scale application in the future.”

Should Smart Scale funding not pan out, the group said it is analyzing other approaches to funding the regrade.

Apart from Smart Scale, the group said in its responses to the city, “…we will be running pro formas assuming Leigh Street improvements to be part of the Arena construction costs. In this new scenario, we have taken advantage of combined construction efficiencies … and assume a reduced Leigh Street cost of $20 million” versus $24 million. 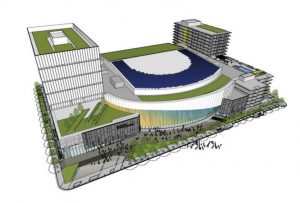 A conceptual rendering of the new arena with office building to the left and apartments to the right. (City of Richmond)

As proposed, Navy Hill would be kickstarted with $900 million in private investment that is projected to total $1.3 billion upon completion of the project. The development agreement put forth by the mayor and now under review by City Council requires NHDC to show the $900 million has been secured before the city can pursue a bond sale to finance the 17,500-seat arena, projected to cost $235 million and planned to be the largest in Virginia.

The bond funding would be paid back using tax-increment financing generated from real estate tax revenue from new development in a district proposed to span much of downtown, bordered to the west and east by First and 10th streets, and to the north and south by Interstate 64-95 and the Downtown Expressway.

There is another SLIGHT problem with the street plan; the PM Research Center’s HVAC, back-up generators, basement egress doors,, some ventilation areas, and the loading docks are all below grade at the current level of our sunken Leigh Street. I have not heard ANYONE address this issue even prior to this change. I count six loading docks that are below grade. Are they to stay lowered and a retaining wall and service ramp built to them or will they be raised along with the road by raising the structure itself???? Who would pay for this work as I am sure… Read more »