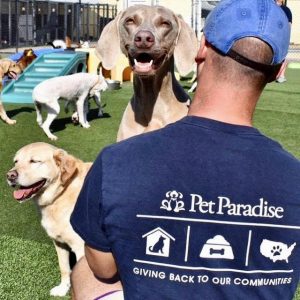 A chain of dog and cat boarding facilities is preparing to mark its territory in the Richmond market – complete with a bone-shaped swimming pool and “Very Important Pet” (VIP) suites.

Jacksonville, Florida-based Pet Paradise has filed preliminary plans to construct a 15,300-square-foot, 182-unit complex on a 2.9-acre lot at 4101 Williamsburg Road, according to a site plan filed with Henrico County’s planning department.

The wooded site is next door to the original Country Style Donuts location, and is along one of the main routes to Richmond International Airport.

This would be the company’s first metro Richmond location and its second in Virginia, according to its website, adding to an existing operation in Charlottesville.

Plans call for the proposed Henrico location include several amenities, such as an area for dogs under 30 pounds, a veterinary clinic offering weekly medical care, several grooming stations, and a 700-square-foot dog park day camp. 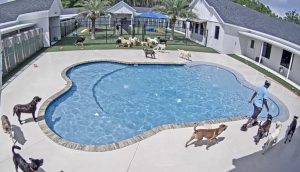 A bone-shaped pool is one of several amenities to be offered at a pending Pet Paradise slated for eastern Henrico.

Of the 182 climate-controlled kennels, seven have been set aside as VIP Suites, which provide premium caretaking services and includes auto-refilling water stations and raised beds.

Not to be left unpampered, cats will be offered their own space at the front of the building, where several window ledges will be installed, along with cat trees and scratching posts.

While much of the indoor and outdoor play areas, kennels and amenities are on the first level, a 600-square-foot apartment for the facility’s caretaker’s quarters would be constructed on the second level, according to site plans.

The company Pet Paradise is not related to a regional retail pet store chain that operates under the same name in Hampton Roads and the western half of the state.

Boarding rates vary by location and availability at each facility, according to its website, but daily rates, depending on the size of the kennel, type of animal and services, start around $34 a day for dogs and about $20 for cats.

The Henrico property is zoned for general commercial business and light manufacturing uses, which allow for commercial kennels to be constructed by right without approval of the county’s Board of Supervisors.

Brian Franco, Pet Paradise vice president of real estate, could not be reached for comment.

The site is owned by Rosalia Sanzone, according to county real estate records, and most recently was assessed by Henrico for $211,400.

Richmond-based Timmons Group is listed as the project’s site engineer, while Florida-based Kasper Architects + Associates is designing the new building.

A general contractor for the new facility was not listed on site plans.