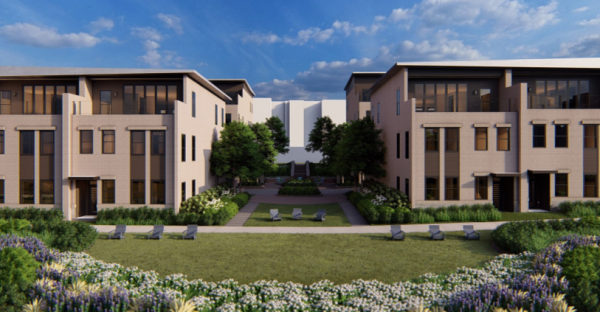 A Henrico-based homebuilder known for its large projects in the suburbs has broken ground for the first time in the city of Richmond.

Eagle Construction of VA began work last week on its McRae & Lacy townhome development at 401 and 421 W. Seventh St. in Manchester. It’s the company’s first project inside the city limits, after decades building in the counties. 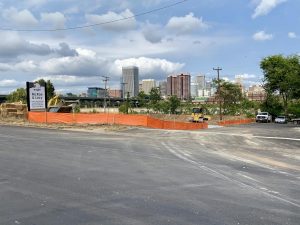 Eagle Construction of VA has broken ground on its first development in the city — McRae & Lacy — at 401 and 421 W. Seventh St. in Manchester. (J. Elias O’Neal)

Plans call for 26 townhomes to be constructed on the site, including 14 four-story homes fronting West Seventh Street and 12 three-story homes to be built facing the James River.

Will Kennedy, Eagle Construction’s director of land acquisition and strategy, said in an email that construction crews began clearing the site last week, with vertical construction slated to begin in early 2020.

The project is taking shape on a wooded 1-acre parcel wedged between Legend Brewing Co. and Jeremy Connell’s 7West townhouse project. It is one of the last developable sites with river views in the neighborhood.

McRae & Lacy is a joint venture between Eagle Construction, which will serve as the builder, and a group tied to local attorney Jack Pearsall that owns the land. 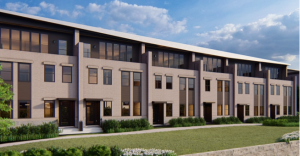 Potential buyers will be able to choose between three floor plans ranging from 2,350 to 3,100 square feet, according to the company’s website. Unit prices will start at around $700,000.

A center alleyway through the development will provide access to each of the residences’ two-vehicle garages, along with green gathering space in the middle of the property.

The river-fronting units will include elevators, floating steel stairs and a NanaWall, which is a floor-to-ceiling retractable window, on the third floor, the website said.

One of the river-fronting units.

McRae & Lacy is the first of at least two projects in the city that Eagle has on the drawing board.

The firm also is planning an infill townhouse development with 21 residences on a nearly 1-acre surface parking lot at 1 E. Cary St. in Monroe Ward.

That project requires a special-use permit application, which is set to be heard by Richmond City Council next month or in November, Kennedy said.

Beautiful designs. The city is getting money dumped into projects and Manchester is going to be a top contender for best neighborhood in the city. Get in before it booms.

Best Neighborhood with missing and broken sidewalks. Abandoned, collapsing buildings (old store at Stockton & 6th) still in some blocks and streets that are in places barely paved yeah….City has got to do a lot more on its infrastructure before anything is considered even mediocre. Developers and residents (everywhere) need to say can’t we all get to Fan and Monument Ave standards??!?!

Even those neighborhoods have the same issues with infrastructure as Manchester. in that sense, the neighborhoods are comparable. The only difference im seeing is the lipstick investors are putting on buildings to make a quick rental dollar. That said, most of the manchester area is too dilapidated to do anything other than rebuild brand new, which is what is being seen.

Manchester- ” for best neighborhood in the city”…. I must have been looking at the wrong Manchester… It’s dirty and gritty- sketchy, at best. $700K to live there- no way!

Plus I am not sure I would exactly call these beautiful designs. Blank tan walls with windows without any trim. I’m really hoping they look better when actually built, but these renderings leave a lot to be desired.