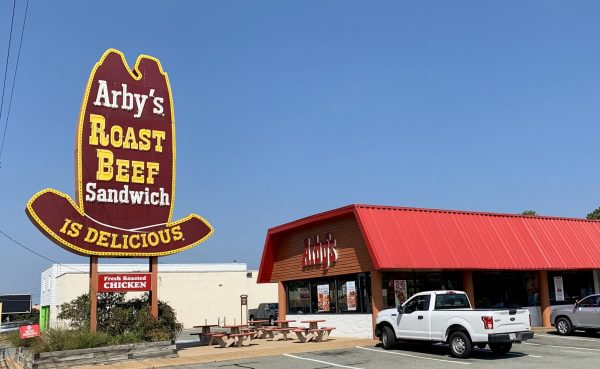 The long-standing Arby’s at 5900 W. Broad St. would be razed as part of eight parcels being considered for a proposed Wawa fueling station. (Photos by J. Elias O’Neal)

Arby’s might have the meats, but Wawa soon will have some of the fast food joint’s Richmond real estate.

The gas station and convenience store giant has filed preliminary plans to build a new location on the site of the longtime Arby’s restaurant at 5900 W. Broad St.

In addition to the Arby’s, several other structures on the site would be razed to make way for the proposed Wawa, including commercial buildings at 5906 and 5910 W. Broad St., and two office buildings at 2102 and 2104 Bremo Road. 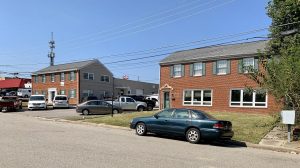 While the buildings would be scrapped, plans indicate Wawa would repurpose the existing Arby’s cowboy hat neon sign that fronts West Broad and dates to the early 1970s.

The properties are owned by a variety of business entities: Arbys on Broad and Bookcase on Broad own three parcels at 5900, 5906 and 5910 W. Broad St., while D.E. Mitchell LLC owns the remaining five parcels at Bremo Road and Hampstead Avenue.

Richmond-based The Restaurant Co. operates the Arby’s at 5900 W. Broad St. as one of its 18 locations across the region, but does not own the real estate on which the restaurant sits. 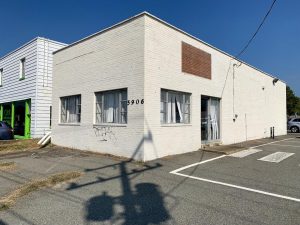 The now vacant office building at 5906 W. Broad St. would be razed to make way for a proposed Wawa.

Combined, the parcels were assessed by the county for about $1.9 million, according to property records.

Tony Rolando, a broker with Pollard & Bagby, is representing the property owners in the deal. He would not comment about any terms related to the transaction, including whether the site would be leased or sold to Wawa, and whether the property was under contract.

A timeline for construction was not disclosed in the site plans.

Wawa could not be reached for comment Tuesday afternoon. 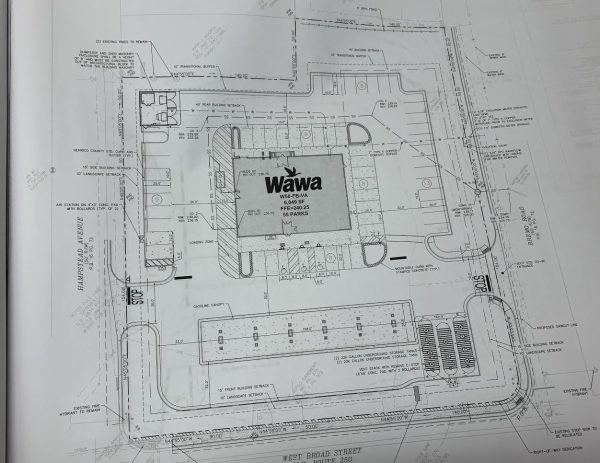 Plans call for a 6,100-square-foot store to rise roughly in the center of the property, with six fueling stations for about 12 vehicles that would front West Broad. A total of 55 parking spaces are planned for the site, according to submitted plans, with a 35-foot buffer planned between the fueling station and a bordering residence along Bremo Road. A 10-foot buffer is proposed between the proposed Wawa and bordering residence along Hampstead Avenue, and an alleyway linking Bremo Road and Hampstead Avenue would be eliminated.

The Wawa would be accessible via Bremo Road and Hampstead Avenue despite fronting West Broad, according to submitted site plans.

Aside from its fueling stations, the company is known for its made-to-order sandwiches and salads through touch-screen terminals. The chain also sells its Wawa-branded coffee, shakes and smoothies.

Wawa soon will operate 32 stations across the metro area, according to its website, with plans to launch its newest operation at 9100 Three Chopt Road in Henrico this fall.

There’s a whole section on Arby’s on the Roadside Attractions website http://www.roadarch.com/eateries/arbys.html

Like the Neon Museum in Vegas, It would be neat to preserve some of the the more notable Richmond-area signs/advertisements/storefronts as buildings and businesses come and go.

Ever heard of the Valentine Museum?

Not until now. Looks neat.

For my next trick, imagine a website that’s tailored exclusively to reporting on Richmond-area business dealings.

How will the sign be preserved? Will it remain in place? It looks like a sign may be indicated on the drawings, but the note pointing to it is cut off….I’m curious!