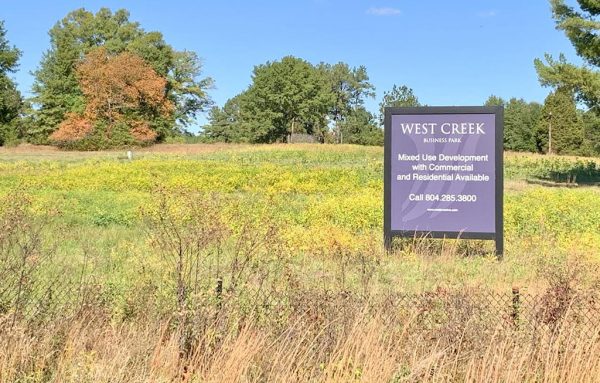 A 36,000 square foot commercial development is set to launch during the first quarter of 2020.

Developers are moving forward with the first leg of a long-anticipated retail and office project at the fringes of West Creek in Goochland County.

The Pruitt Cos., which owns and operates West Creek with Bill Goodwin’s Riverstone Group, filed its conceptual master plan this month to construct a 36,000-square-foot commercial development on about 6.4 acres it owns at 12638 Patterson Ave.

The project kicks off what will become a sizable redevelopment of the 60-acre former Oak Hill Golf Course, along with an additional 72 acres on several large neighboring parcels.

The combined 132 acres, which sit east of the Patterson-Route 288 interchange, were purchased by Pruitt Co. and Riverstone in 2006 for about $11.1 million, according to county records. 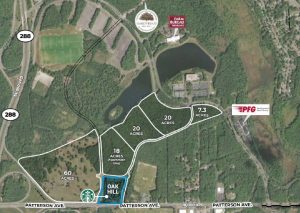 A site map of the planned development. Courtesy Pruitt Co. and Riverstone Group

Dubbed Oak Hill East shopping center, plans for the first phase call for three buildings: two one-story structures around 6,500 square feet each the third one 6,000 square feet; a two-story commercial building with about 14,000 square feet of ground-level retail and about 13,700 square feet of office space upstairs. The site also would include 205 parking spaces.

The group also plans to construct a roadway that eventually will connect Patterson Avenue to West Creek Parkway in front of the retail center, according to site plans submitted to the county’s planning division.

JoAnn Hunter, Goochland County’s director of community development, said the group had to submit a conceptual master plan for planning commission review and approval in accordance to the proffers that regulate the 3,500-acre West Creek Business Park area of the county.

The planning commission is set to review and vote on Oak Hill’s master plan submittal during its Nov. 7 meeting, Hunter said. No further public approvals are required.

If granted approval, the group could break ground on the development by early 2020.

A cost estimate for the project was not disclosed.

The retail site is being marketed and leased by Peter Vick and Harrison Hall of Colliers International.

Thomas Pruitt, who with father Tommy Pruitt and cousin Michael Pruitt operate Pruitt Cos., said the firm has received plenty of interest in the Oak Hill site since marketing began about six months ago.

“We’ve been working on this for about two years, and have fielded interest for the development since we decided we were going to move forward with the project,” Pruitt said. 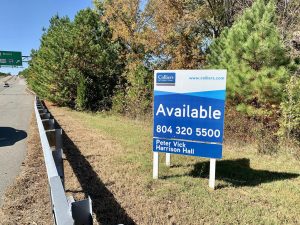 Marketing of the development has already begun.

About two years ago, the group worked to have the county eliminate a proffer amendment that restricted retail from being developed within 1,000 feet of Patterson Avenue, opening up the site to new retail and restaurant opportunities.

“That cleared the way for us to move forward with this phase of the development,” Pruitt said. “Because the property falls within West Creek, it can accommodate a mix of office, retail, industrial and limited residential.”

The group is in negotiations with Starbucks to join the project, Pruitt said, adding it’s also talking with several other local dining establishments. He could not disclose any other specifics.

Pruitt said the group also is negotiating with an apartment developer to construct up to 300 units on an 18-acre site next door to the Oak Hill East shopping center. Plans for that phase have yet to be filed.

The map of the proposed road from Patterson to West Creek Parkway shows why “Innsbrook After Hours” move was rejected.

Been waiting for this for some time. Hope they bring a “nice” grocery store in there – Paterson needs a really nice grocery store! ie Trader Joe’s! Would be nice also to see some Nature and Walking Trails through West Creek – along the Tuckahoe Creek would be great!…make use of the wonderful natural areas

Trader Joe’s has not located a second store anywhere in the Richmond market. What really makes you think that they would put one here so close to the only other one in the market? It will likely be a Kroger or Publix. That is about the right radius for them from their other stores.

Nobody likes going to Short Pump – too congested.

Don’t necessarily disagree with you, but still think they would not put one so close to the other. Also think about this, if no one wanted to go to Short Pump it would not be as congested…

I believe he was paying tribute to Yogi Berra. It was a joke.

That’s a whiff of Yogi, “Nobody goes there anymore, it’s too crowded.”

I played that golf course regularly many years ago and was truly sorry to see it close. It’s unfortunate that the property is now going to be more “…acres and acres of tar and cement…” Undeveloped green space apparently has fallen out of favor in the face of rampant capitalism and our consumer-focused mentality. Where there’s a dollar to be made, someone will pursue it. When is enough, enough?

If the folks who cherished the “undeveloped green space” had stepped up and purchased the land, it could be preserved. That’s how the system works. Someone owned the land and put it up for sale to the highest offer. Which was their right. Where were the folks who wanted the preservation then?

There are miles and miles of undeveloped land in the area. What’s wrong with a development that literally borders a prior development?

And yes, I played that course many times myself.

It’s a common theme, the folks who want preservation of land and no further development, want it on someone else’s dime. They are not willing to step up and buy any of the land for preservation purposes, but they are more than happy for the current owner’s to continue to pay taxes on the property so they can enjoy the nature view. Or, if it’s a failing business, like many golf courses, continue to operate just for the sake of nostalgia and keeping things the same (opposition to closing Henrico’s golf course a prime example). It’s interesting that no one… Read more »

Ashton, You got that right. Residents want upgraded schools, FIOS, a Starbucks and cool restaurants, oh and don’t disturb any green spaces.

At the same time they don’t want to pay for it nor suffer the traffic and increased crime, etc.

Case in point. The latest round of folks who took issue with NewMarket filling in the Canal, but never offered to open their own wallets. Amazing how that happens.

Probably when there are way too many golf courses.

The Route 6 gateway to rural Goochland can be sensitively developed as an amenity to residents in this neck of the woods. Present traffic counts are relatively low on this side compared to the 250 corridor, but I believe there will be increasing demand for commercial business here… retail and offices who would like to become part of this community – and contribute to its commerce, as well as committing to maintain its character. There are some great models of lower-density, smaller-scale and well-detailed developments which would likely work here without disrupting the rural character which attracts people to Goochland.… Read more »

My grandfather Larry Sterling and the Patterson Land Corporation owned this property for many years. The club was established by a group of Jewish businessmen in response to prominent golf clubs in the area being restricted to Jews. It served as a center of secular and religious community events for many years, kind of like a “Richmond Catskills.” Prominent Jewish member families that owned development companies started spurring development in Henrico County during this time. By the 1980s due to reducing membership and the desegregation of most of the clubs, Oak Hill ultimately was closed. He tried to purchase the… Read more »