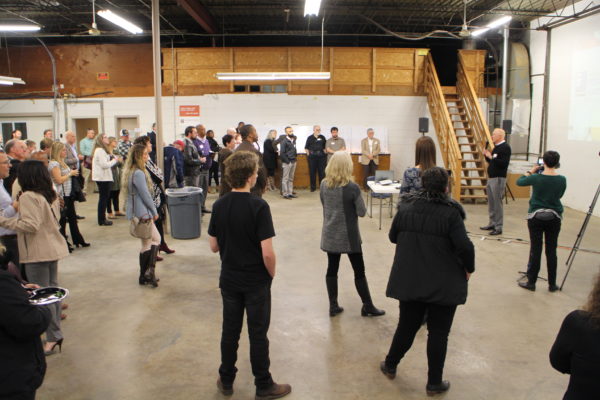 Supporters gathered inside the building that will house the training center. (Jonathan Spiers)

Goodwill of Central and Coastal Virginia is a couple months into a $250,000 capital campaign to establish a Richmond version of its Regional Center for Building and Construction Trades. It would be modeled after a facility in Hampton that the nonprofit has operated since 2015 in collaboration with Thomas Nelson Community College.

The Richmond facility, which would involve the Community College Workforce Alliance of John Tyler and Reynolds community colleges, would fill a renovated warehouse on Goodwill’s Midlothian Turnpike campus, providing a place for hands-on training for students looking to enter construction trades such as HVAC, electrical and plumbing. 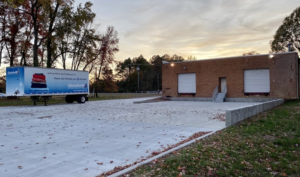 Construction firm W.M. Jordan Co. is signed on to provide in-kind project management for the renovation, which also would involve mechanical contractor ColonialWebb. And the campaign is getting going with a $25,000 challenge grant from the Community Foundation’s Kenneth and Leslie Montero Fund, in which the local couple has pledged to match that amount if Goodwill can raise it by year-end.

Also boosting the effort is a $125,000 grant from the Robins Foundation for program support. That’s enough to fund two years’ worth of programming for the center, said Andrea Butler, Goodwill’s vice president of mission advancement. Butler was among several dozen people who gathered at the building to raise awareness for the campaign last week.

“We’re trying to build a cadre of construction industry partners who want to collaborate with us to hire people who come through the programs, but also to help inform our curriculum, to help us design programs, tell us what they need in a student exiting the program,” Butler said, adding that field trips and guest lectures are also sought.

“There’s nothing that excites a student more than actually meeting an employer in the industry and learning more about the work environment, the culture, the wages,” she said. 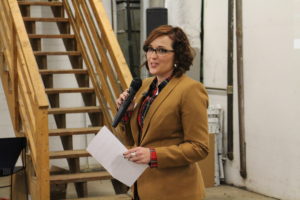 The happy-hour event was sponsored by Riverstone, a Chesterfield-based construction firm owned by Amanda Wheeler, who said she was invited to participate in the initiative by Goodwill board member Lindsey Barden, owner of commercial real estate firm Dark Horse|CRE.

Wheeler, who coordinated the event with local brand strategist Linzy George, said she’s determining how her firm could support the project going forward, adding that her goal at this point was to help raise awareness.

“After hearing the stories of people coming through the program and their success and how it’s changed their lives, I knew that this was something that I could truly put my heart into,” Wheeler said in remarks to attendees.

“Every one of us was given an opportunity at some point in our lives, and that opportunity shaped us all into who we are today,” she said. “We’re trying to bring heart into this by saying the people in this community deserve these opportunities. Yes, it’s important to help our businesses grow, but the opportunities that these people wouldn’t otherwise be afforded is of the utmost importance to us.”

Goodwill is aiming to open the center in early 2020, with the Robins Foundation grant covering programming for 75 students. Additional funding would allow the center to expand programming to as many as 200 students per year.

“The community college brings the credential and technical training part, and we do the soft-skills training and wraparound supports, to make sure that people are employable and to help keep them stable once we place them in jobs,” Butler said.

Butler said Goodwill has raised about $55,000 in cash and about $75,000 in in-kind construction services for the project so far. Construction is scheduled to start in the first quarter of next year, with fundraising continuing until the goal is met.

Great event, great cause, and a well told story. Sorry I didn’t catch up with you while you were there, Jonathan.