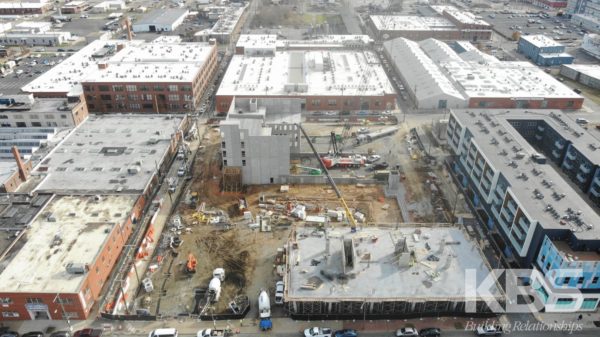 The Current, a $68 million mixed-use development in Manchester, is underway at 400 Hull St. (KBS Inc.)

Foraging for more urban territory, two property management firms that typically do the bulk of their local business in Richmond’s suburbs have been enlisted to fill a new mixed-use development in Manchester.

Highwoods Properties and Drucker + Falk recently entered into an agreement to manage The Current, a $68 million office and apartment project that’s under construction by developer Lynx Ventures at 400 Hull St.

Kate Hosko, Lynx Ventures development manager, said the deal was in the making for months, with all three parties executing an agreement by late November.

“We feel like we’ve assembled the dream team when it comes to property management for The Current,” Hosko said.

This is the first management agreement both Highwoods and DF have picked up in Manchester, which is quickly becoming the city’s fastest-growing population center. 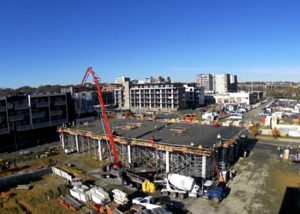 A six-story, 70,000-square-foot office building is under construction at the corner of Fifth and Hull streets. (Lynx Ventures)

The Current is taking shape on a 2-acre surface lot bounded by Hull, Decatur, Fifth and Fourth streets. The office portion of the project will rise at the corner of Fifth and Hull streets. The apartments, as well as 8,000 square feet of commercial space, will sit near Fourth and Hull.

The office building, which is being constructed on spec, is slated to be completed in fall 2020. The apartment building will be finished early in the first quarter of 2021.

Aside from the two buildings, 4,400 square feet of dedicated public courtyard space linking Hull and Fourth streets will be incorporated into The Current, as well as a four-story parking garage with up to 323 spaces and 25 public electric car charging stations that will connect the two buildings in the middle of the development. 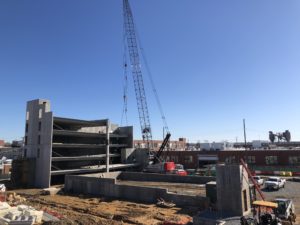 A 323-unit parking garage is rising in The Current. (Lynx Ventures)

Both Highwoods and DF would be responsible for partnering on events for the dedicated courtyard space.

“We’re looking at several options that would be a benefit to the residents of the apartment building and the neighborhood,” said Wendy Drucker, Drucker + Falk managing director. “That may include some shared benefits for our residents with future retailers in the development.”

Lynx has retained JLL’s Gareth Jones and Jimmy Appich to handle retail and office leasing for the development, while Highwoods will manage the property.

“The Current is a very unique opportunity for Highwoods because it brings us into the city’s urban core, and it provides us the opportunity to grow our third-party management services,” DuFrane said. 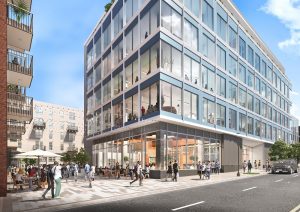 A rendering of The Current. (Courtesy Hickok Cole)

Highwoods’ closet asset to The Current is The Martin Agency building at 1 Shockoe Plaza in Shockoe Slip, which the firm developed in 1996 and continues to own. The bulk of Highwoods’ local portfolio is located in the Innsbrook office park in Henrico and the Stony Point Office Park on the city’s Southside.

DuFrane said the Martin Agency recently signed a 15-year renewal for 118,000 square feet in the building that serves as the ad agency’s national headquarters.

“There is a lot of demand for high-end class-A office space in the city,” DuFrane said. “Mixed-use is the future, and high-quality projects like The Current are going to be important as Richmond grows.”

Drucker agreed, adding The Current adds to the 6,000 apartment units DF manages for property owners across metro Richmond, including the Winterfield at Midlothian near the Winterfield Crossing development in Chesterfield and the Deco at CNB on West Broad Street downtown.