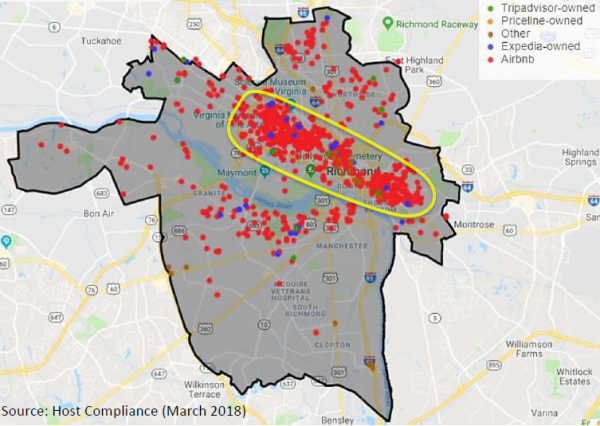 The latest version of the proposal, which emphasizes restrictions based on property use more so than frequency of rentals, is set to be presented to the Richmond Planning Commission at its meeting this Monday.

A public hearing will precede a recommendation to City Council, which could vote on the policy at its Jan. 13 meeting.

A report submitted to the commission shows the revised rules would restrict short-term home rentals to operators’ primary residences, meaning the property where an operator resides at least half the year. At the same time, they no longer include a restriction on the number of nights a dwelling could be rented per year – previously proposed at 180 nights a year.

Other changes made to the policy since it was rolled out last spring include prohibiting existing renters from subleasing their unit as a short-term rental, removing the number of dwelling units that can operate as rentals in multifamily residential and mixed-use zoning districts, and requiring operators to reside on the lot where the rental is located, not in the specific dwelling to be rented. 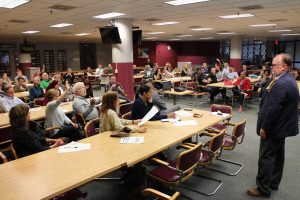 The rules were revised based on feedback received in meetings and surveys in the past year. The survey results showed a mixed bag in public sentiment for the rules, which the city has been working on since 2015 to allow short-term rentals as a permitted use. Opinions remain mixed, as the commission report includes multiple correspondences from city property owners opposed to or supporting certain parts of the proposal.
Among the opposition letters, the primary residency requirement appears to be a recurring sticking point, with several writers contending that they should be able to rent rooms or houses without having to reside on the property most of the year.

Currently, short-term rentals are not allowed by city ordinance and are therefore considered illegal. Nonetheless, about 750 rentals were active in the city as of Thursday, according to the website AirDNA.

Of those, 68 percent were home rentals, while the rest were room rentals. Ninety percent were listed on Airbnb, while others were listed on HomeAway or both. The average daily rental rate in November was $141, and the occupancy rate was 73 percent in June.

The new policy would allow homes or rooms to be rented for up to 30 days at a time by operators who would be required to obtain a biennial permit at a cost of $300.

Those approved for a permit would be issued a zoning compliance number that must be posted on all rental advertisements. Doing so would help in enforcement, the policy states.

The primary residency requirement is intended to reduce speculative use of private residences as hotels, the policy states, as well as preventing absentee landlords from converting long-term rental properties for short-term rental use. An overarching goal is to preserve the residential character of a neighborhood and limit effects of businesses operating there.

Primary residency would not be required for properties in some mixed-use and commercial zoning districts in the city, under certain conditions. Existing tenants who are renters would not be able to operate rentals themselves, in keeping with similar policies adopted in localities, including Charlottesville, Williamsburg, and Arlington and Fairfax counties.

While the latest proposal does not limit the number of nights a dwelling could be rented per year, staff recommends revisiting the rule after a year to see if a limit is needed. The decision to not include an annual limit was made due to concerns over how to enforce it, the report states.

Operators would not be required to be present every night a dwelling is rented, though the policy notes that, with operators required to reside there 185 days a year, the number of allowable “unhosted” stays would be limited to 180 nights as a result.

The full proposal and accompanying documents can be viewed here. Monday’s meeting starts at 1:30 p.m. in the second-floor conference room at City Hall.

Funny about 1/2 or more of the residents at the hearings I went too, almost a year ago now, liked the limit on rental nights. I do not want to the two homes near me already used 3-6 months a year turned into short term hotels every night. And, I thought the point of the fee was to raise fund for enforcement by an outside agency? The City staff wants the high fee of $300 a home a year and taxes off the rental for enforcement but is worried about enforcement???

If the article is correct, the city will collect $150/year. Maybe that rate should be higher.

Ugh. When will the city learn this is not what we need from government? More regulations and bureaucracy. Certainly there are problem short-term rental properties. But there are also problem long-term rentals and problem owner-occupied properties. The solution is not a convoluted labyrinth of new rules and a new bureaucracy to enforce them. Enforce the existing laws about noise and safety, and leave the rest alone. Why would anyone assume that a city that struggles to deliver basic services is smart enough to think through the intricacies of the short-term housing market? Richmond, please do us all a favor and… Read more »

John, I would invite you to check out Austin, where the cost of living has skyrocketed in large part due to short term rentals clogging the housing market. If we just let our housing stock become permanent rental spaces then we are begging for dramatic cost of living increases.

I’m familiar with the issue in Austin, and think it’s a bit overwrought. The solution of course is to build more housing, not to tell people they can’t do a reasonable thing with their houses.

Can someone loan their house to a friend for free? Obviously. And yet they should be punished for the exact same thing when they charge? That makes no sense. And yes, I think prostitution being illegal is equally stupid. In both cases, regulate it, don’t pretend it doesn’t exist.

You sound like you have never lived in a city or town completely overrun by short-term rentals. My siblings live in Bend, OR, a very small town now struggling with over 50% of the homes in the historic downtown-adjacent area being rented out as short term / Air B&B rentals. In three years, the short term rental count went from 50 to 1000 in the Mill Pond/Downtown/River West/Old Town areas. That sounds like a drop in the bucket, but these neighborhoods are small in footprint, full of original Craftsman homes on small lots and tight-knit communities which flow into each… Read more »

I fear you don’t understand how math or real estate works. I’m very familiar with Bend, a good friend lives there. The issue is the massive influx of Californians and a failure to build new housing. The air bnb bit is a symptom, not a cause, as a simple assessment of the numbers will show. And Bend is a tourist destination as a ski resort small town in a way Richmond just isn’t, it’s a completely inappropriate comparison. The areas of Richmond “most likely to be affected” are also the areas where the real estate is highest. It’s really unclear… Read more »

If you want them to enforce existing laws, that means enforcing the existing law for short term rentals that requires you to get a special use permit from the Zoning office. Which would be perfectly reasonable for the absentee landlords who oppose the proposed regulations, since they are running B&B/hotel businesses on residentially zoned properties. But they want to be able to break the existing laws without any accountability, so they’re not going to be happy no matter what decision city council makes.

That air bnb island in the James? Not someone’s primary residence. & et. etc.

If you don’t provide a legal path, people will just keep on doing it anyway, and I don’t blame them.

I don’t airbnb myself, nor do I have any plans to. But I like the fact that people can rent whole houses.

These regulations sound good. I live in a neighborhood that is a prime location for AirBNBs, so I am very happy about the primary residence restriction. Also, on prohibiting subleasing existing rentals. Good job city council.