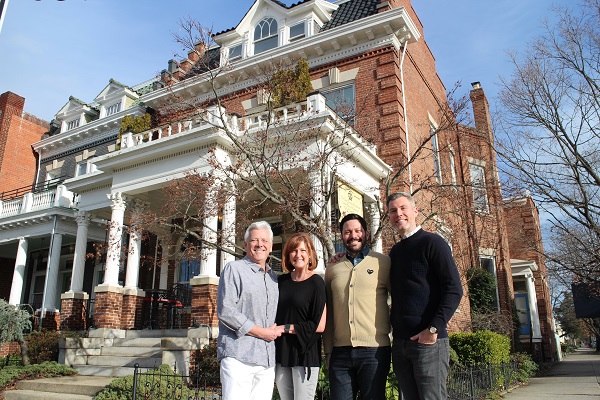 Sean and Polly Brooks and new owners Ronald Rivera and Mitch Dorsey, from left, in front of The One Bed and Breakfast, which Rivera and Dorsey are rebranding as The Boulevard Inn. (Photos by Jonathan Spiers)

A Fan bed and breakfast that serendipitously brought its previous owners together has lured another married couple who are guiding it into a new chapter.

Polly and Sean Brooks have sold The One Bed and Breakfast, at the corner of Main Street and North Arthur Ashe Boulevard, to Richmond native Mitch Dorsey and his husband Ronald Rivera.

The new owners plan to reopen the B&B in the spring as “The Boulevard Inn,” after a round of renovations that will create two more guest rooms, bringing the total to six.

They bought the century-old building, along with the house next door that the Brookses also owned and rented as apartments, in late November for $1.04 million and $650,000, respectively. The combined purchase, $1.69 million, does not include the cost of the B&B business, which the couples did not disclose.

Dorsey said they funded the purchase of the buildings and the business with investment from immediate family.

The Brookses, who opened The One in 2011, said they were on the fence about selling until they met Dorsey and Rivera, who were searching for area properties they could turn into a B&B. The Brookses had been running The One on top of their respective day jobs – Polly in the banking industry, Sean in electrical wholesale supply. 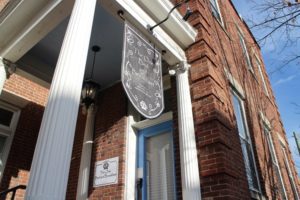 The One has been open since 2011 at the corner of Main Street and North Arthur Ashe Boulevard.

“We both have full-time jobs and were running the bed and breakfast for nine years,” Polly said. “We were just feeling tired and ready for a little bit more simplification.

“We had talked about potentially selling the house next door and continuing to run the bed and breakfast – but these guys came along,” she said.

She and Sean enlisted Long & Foster agent Robb Moss to market the properties for sale without listing them publicly, in part because of their unsurety about selling.

“We were so not sure,” Polly said. “It has been a conversation we’ve been having a year and a half to two years, and even that Thursday after we signed the exclusive deal with Robb, I called him in tears and was like, ‘We can’t do it!’”

The day after the business and properties were made available, Polly said, Dorsey and Rivera came calling with their agent, Tommy Waterworth with Ruckart Real Estate.

“We just felt like, when we met these guys, this is what’s supposed to happen,” she said. “They were so excited, you felt like it was the right thing. And they were going to continue the B&B, so there was a lot of really good karma that came along with that. It was a meant-to-be kind of thing.”

Dorsey, who grew up in Midlothian, said the feelings were mutual when they met Polly and Sean.

“It just felt right,” Dorsey said. “It felt like we had known each other forever.” 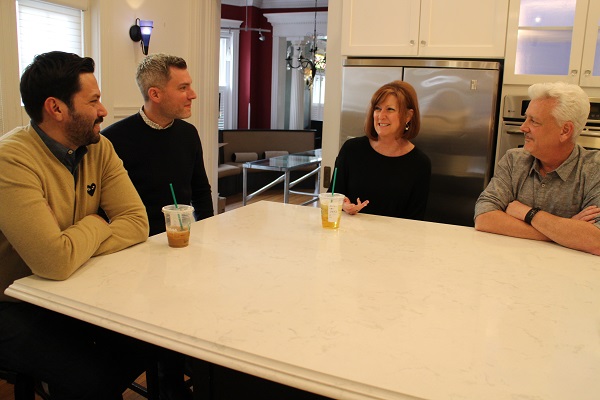 ‘It just felt right,’ Dorsey said of meeting Polly and Sean. ‘It felt like we had known each other forever.’

Dorsey said they had noticed The One while looking around town for a B&B property upon moving here a year ago from New York City.

Both Dorsey and Rivera have experience in restaurants, and Dorsey, 36, also has experience in hospitality, having worked at hotels in New York and Europe.

“We’ve always driven by this property since we moved here, and my whole life I’ve had this dream of opening a bed and breakfast,” Dorsey said. “I’ve been in hospitality my whole life, and combining all of my experiences through hotels and restaurants and events and catering, it just made sense that I could put that all together in one package and work for ourselves.”

Rivera, 40, a native of Puerto Rico, said he worked in several upscale restaurants in New York, where he and Dorsey met about five years ago.

“We worked at the same restaurant, but at different times,” Rivera said, referring to their stints at ABC Kitchen, a New York eatery by French-American chef Jean-Georges Vongerichten.

A James River High School grad, Dorsey studied business administration and tourism administration at The George Washington University in Washington, D.C. He lived in Germany for a year and worked at hotels there before moving to New York, working his way up from front desk to management at hotels such as The Carlyle, a five-star hotel in the Upper East Side.

He later transitioned from hospitality to restaurants, enrolling in the Institute of Culinary Education in New York. Most recently, he spent five years with a restaurant group in New York, handling its catering and events until he and Rivera turned their sights toward Richmond.

“We decided after being there for a while that we wanted to move back to Richmond and settle down,” Dorsey said. “Life in New York is pretty hectic and stressful, and we were ready to take it easy and try to start a family, so Richmond seemed like the right move.”

‘A lot of memories for us’

Where the Brookses resided at The One, Dorsey and Rivera plan to keep their residence in Midlothian, though they’re outfitting a room in the B&B’s basement as an owner’s suite so they can stay over as needed.

“We have a home in Midlothian, but I envision us being here quite often,” Dorsey said, adding that they plan to keep a few of The One’s employees to help run The Boulevard Inn.

As for the Brookses, they’re moving to another house eight blocks away in the Fan that they purchased within a week of selling the Boulevard properties.

“In six days, we sold both houses, the business, quite a bit of the furnishings, and bought our own house,” Sean said. “We love the Fan. This is a great neighborhood.” 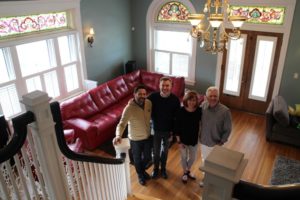 Rivera, Dorsey, Polly and Sean in the B&B’s front room.

Saying goodbye to The One is bittersweet for Sean and Polly, who met after Polly took a house tour of the property, saw Sean’s family photos – he lived there before opening the B&B – and later recognized him on the dating app Match.

“I’m not a stalker!” Polly said, laughing. “I knew what he looked like because his pictures were all over the house. About a month later, we were both on Match.com, and he popped up on one of my (potential matches).”

Two years later, they got married on the front steps of the house and held a reception out back.

“This house has a lot of memories for us,” Polly said.

Over nine years, Polly said they have hosted over 3,500 guests, according to the number of signatures in their guestbook. While juggling their day jobs, Sean said they averaged a roughly 50 percent occupancy rate, which he expects will go up with Dorsey and Rivera running it full time.

Dorsey and Rivera said they plan to keep the rooms around their current daily rates – $155 weekdays, $175 weekends – with a potential adjustment reflecting the renovations. They also plan to continue renting the apartments next door, which the Brookses marketed as short-term or monthly rentals.

The renovations to the B&B will include converting the Brookses’ former bedroom into a guest room, and fitting an additional guest room in a back area of the house. Dorsey and Rivera also plan to redecorate the interiors.

“We want to change the styling and make it our own, pulling inspiration from our time living in New York and our travels abroad and just blend it all together,” Dorsey said.

When they reopen in the spring, they’ll have one of the rooms already booked, Polly promised.

“We’re going to be the first people to book with them,” she said, laughing.

“Yes, you will!” Sean replied. “They will be our very first guests.”