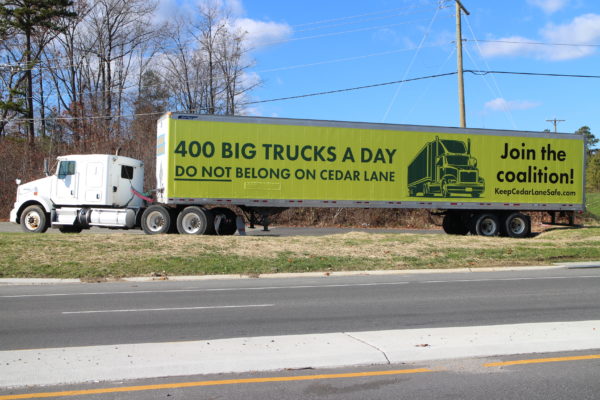 The Cedar Lane Coalition group placed a tractor-trailer with a sign at the intersection of Cedar Lane and Route 1 to raise awareness of their concerns. (BizSense file photo)

The appeal from the Chickahominy Falls homeowners’ association argues that a conceptual site plan for the park presented in 2015 showed multiple access points, including one on Route 1, while the plan approved last year includes only the entrance across from the neighborhood, meaning truck traffic would be solely routed along the two-lane roadway.

Since the board took up the appeal last month, deferring any action to this week’s meeting, the park’s developer, Indianapolis-based Scannell Properties, has submitted a revised plan that includes two additional entrances, including a “right-in, right-out” entrance off Route 1, as well as a second access along Cedar Lane farther west. 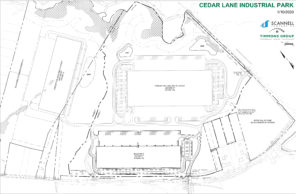 The latest site plan (click to enlarge) shows three entrances to the industrial park, including a ‘right-in, right-out’ off Route 1, shown to the right. Cedar Lane runs along the bottom of the map. (Hanover County)

The amended plan also shows how traffic would circulate on the site and includes an updated traffic impact analysis that reflects the Route 1 access.

In light of the changes, county staff asked the board to defer action on the appeal to its April 22 meeting to provide time to review the updated plans. Supervisors obliged, and staff plans to update the board then on the extent to which the amendments would address concerns raised in the petition.

While the additional access points would provide for more entrances into the property, the Route 1 access – as a right-in, right-out without a traffic signal – would perceivably be able only to capture truck traffic traveling south along the highway. Northbound traffic needing to turn left would access the property via Cedar Lane, by way of the existing signalized intersection there.

A letter to the county from Ann Neil Cosby, a McGuireWoods attorney representing Scannell, states that the Route 1 access would be developed with the second of three distribution warehouses planned for the park. The letter states that Scannell will commit to completing the Route 1 access within 24 months of the issuance of a certificate of occupancy for the park’s first building.

The updated site plan, drafted by Richmond-based Timmons Group, shows a 260,000-square-foot building fronting Cedar Lane with a 25-foot buffer and parking in between. The plan shows space for a future second building behind it totaling 420,000 square feet, and a site for a third building totaling 267,000 square feet that would be built to the west in a second development phase.

The letter states the third building would not be constructed before the Route 1 access is provided.

Roger Glover, whose Cornerstone Homes is developing Chickahominy Falls, was in attendance at the meeting along with homeowners’ association members and other area property owners who formed the group Cedar Lane Coalition to raise awareness of their concerns. 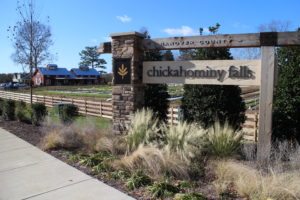 Glover, who filed the petition on behalf of the homeowners’ association, acknowledged the efforts of Scannell to work out a compromise, as well as those of new South Anna District Supervisor Sue Dibble, who he said was optimistic and encouraged by the parties working together to address the traffic concerns.

Planned for 400 homes on 150 acres, Chickahominy Falls started sales a year ago and has been taking shape with dozens of homes surrounding a central barn and community farm that anchors the so-called “agri-community.” Glover said last month he has built as many as 70 homes so far, with 100 people moved in and 150 more waiting to move in.