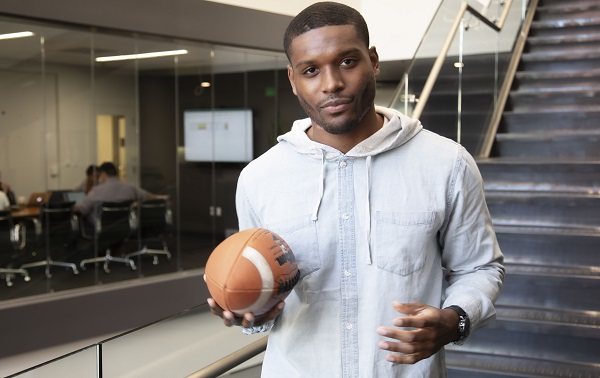 When it comes to watching the Super Bowl, Derek Smith is among those who pay more attention to the ads than the actual game – even if he’s a former football player himself.

Now an art director at The Martin Agency, Smith played ball at the University of Memphis – including two seasons under Justin Fuente, now the head coach at Virginia Tech – before his NFL hopes were cut short due to injuries. Along the way, he picked up a bachelor’s degree in advertising, going on to study art direction at The Creative Circus in Atlanta. 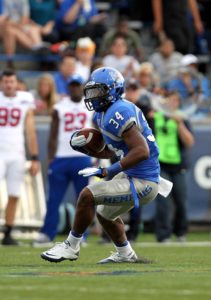 Playing ball for the University of Memphis.

Before joining Martin, the Alabama native did a stint at Publicis Seattle, where he worked on campaigns, including a series of spots for insurance company Aflac that starred Nick Saban, the University of Alabama head coach who, years earlier, had reached out to Smith to recruit him to play for the Crimson Tide.

A case of turf toe in the game that recruiters came to watch dashed his hopes for Alabama. But Smith doubled down and went on to get a scholarship and play Division I ball at Memphis, where he was a team captain and played a variety of positions, including kickoff and punt returner.

While at Publicis, another recruiter came calling – this time an ad industry recruiter who pointed Smith to a job opening at Martin. Hired last summer, he was promptly assigned to the agency’s Buffalo Wild Wings account, bringing an insider’s perspective to the sports-bar chain’s creative content.

BizSense met up with Smith pre-Super Bowl to talk football and advertising, how each has informed the other, and his unexpected second chance to work with Saban. The following is an edited transcript:

Richmond BizSense: What is your role with the Buffalo Wild Wings account?

Derek Smith: Right now, I’m doing a lot of social (media) work, a lot of social videos about different products that they’re featuring, from brisket to their new game-day menu. Coming out with fun, entertaining bar speak and culture.

I’m over the visual aesthetic for each idea that we produce. I have to see how it’s coming to life; I have to know what makes sense or what’s the most entertaining way we can show something versus what we’re saying. It’s like a glorified graphic designer that has to write TV scripts.

RBS: Were you into the assignment? Having played football, were you wanting to distance yourself from sports or try something new?

DS: With my sports background, this seemed like a good fit. For me, I was always sports-minded, but I wasn’t really engulfed in sports as far as watching it. Playing it, you have a different outlook. I always felt like if I had the right opportunity to do a sports-related brief or campaign that I would kill it.

Ironically, before I moved here, I did sit through a campaign with Nick Saban, which was the first campaign for Aflac where they used another spokesperson outside of the duck. That was like full circle, being that I talked to him in high school and didn’t get to play, and somehow it came back around to producing a campaign with him.

RBS: Saban was recruiting you to play for Alabama?

I ended up getting turf toe my senior season, and that was the game that Alabama recruits actually came. He would send me letters every game, like “Dear Derek, I hope you have a good game against Thomasville this Friday,” and I was anticipating the game they were going to come to. I was feeling good, it was the game that was going to determine us going to the playoffs, and I ended up getting turf toe – when your toe bends all the way back in your shoe. It’s like a deep bone bruise, and you can barely walk on it, let alone run over people.

That changed things for the University of Alabama for me. My mom had always told me, if I don’t get a scholarship to play football, then I’ll probably just have to go to a small school in Alabama. But I wanted to work so hard to make it out of my small town in Alabama that after practice, at 12 at night, I would go out and run sprints. I can say I willed myself to get a scholarship. 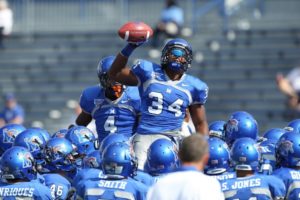 Smith was a team captain in his time with the Memphis Wildcats.

RBS: You got a scholarship to University of Memphis and played under Justin Fuente before he moved to Virginia Tech. Were you studying art direction in school?

DS: I was studying journalism with a concentration in advertising. Our program didn’t really know how to prep people for a creative career; it was more account-based. When I figured out that I would have to go into a more-account role or into a marketing position somewhere, I was like, eh, that’s not what I want to do.

Oddly enough, it’s a crazy story, my mom kept telling me to go to church after I decided not to play football (after a hip fracture, two ACL tears and two MCL tears), because I didn’t know what the hell I wanted to do. I went to this random church on the side of the street. I was probably one of three black people there. Everyone else was white, Caucasian, in Memphis, and after church, people just came up and started introducing themselves to me.

This guy said, “You majored in advertising when you played football? I want you to come interview at my advertising agency on Monday.” And this was on Sunday. He gave me a paid internship, and that’s what kicked off my art direction career.

RBS: What more do you bring to the table having played football yourself?

DS: I think I really understand what it takes and what it is, when it comes down to trying to capture the essence of football. I know the political aspect, when it comes to coaches and how they view you, and I also know how players feel, especially in college. I think I bring that knowledge and those insights that a lot of people don’t really understand about what it takes to play sports at that level.

I know a lot of the behind the scenes: how it feels to take the charter bus to the stadium, or how it feels to catch a punt or kickoff. That’s crazy. And then, a lot of the times when people are put in pressure moments, I know how to deal with that. Putting somebody on the field and a ball that’s 40 yards in the sky and you almost lose it until it’s right in your face, having to do that is insane compared to the day-to-day struggles we face. 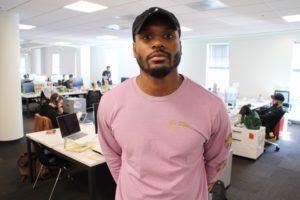 Smith with his new teammates at Martin. (Jonathan Spiers)

RBS: What’s your creative process? How does the process work at Martin?

DS: I have a partner. I was paired with one of our writers, Brigham Kmetzsch. An art director and writer always work together. We sit down and ideate on every project that we do. We just try to come up with the most-fun, entertaining ideas holistically, and he’ll break off and do writing and I’ll break off and lay down the visual scope that I see.

Every project is Brigham and I working together to come up with entertaining content for that particular brief. For Buffalo Wild Wings, it’s been a lot of social. We’ve had a few cool ideas float by, but the client hasn’t bit yet. We should have something pretty soon. We just talked to them about one idea that we had and we’re trying to see if they have any appetite on buying it.

RBS: Is it up to you guys to sell the client on the idea? Or do you pass it off to a pitch man?

DS: In Seattle, it was more so the lower-level creatives, outside of a creative director, got to pitch to clients. Here, for Buffalo Wild Wings accounts, it’s just so new that creatives don’t pitch to the client often. We hand it off to our creative director, and they most of the time go pitch new ideas.

RBS: How do you stay creative individually? Do you have stimuli you go to for fresh ideas?

DS: I like movies. I like dope directing, dope concepts. I play piano, so that’s another outlet for me. I love playing piano.

To me, life is a big problem, and that’s what creativity is: You’re solving a problem with every brief. If I can solve a problem in whatever I do, I tend to gravitate towards that particular activity. With piano, it’s like, how do you put the chords together to produce something pleasing to the ear? What sounds best with each other? What can I culminate to reach this space of symphony?

RBS: Obviously Super Bowl ads are such a big deal in the business. What is it like watching them now being in the business? Are you more critical? Do you dissect them?

DS: Definitely more critical. Definitely, “Ah, trash … trash …” For me, I like seeing where people are going or what they can get away with with certain clients when it comes to Super Bowl ads. I’m definitely paying attention to the ads more than I am the game.