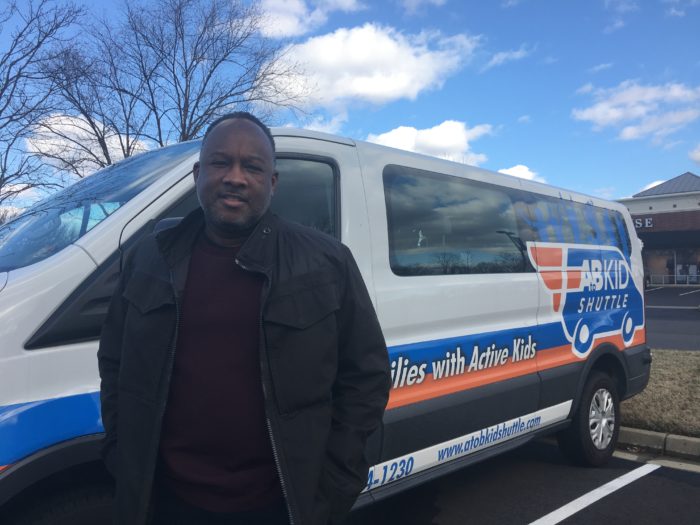 Warren Prescott’s ride-hailing service for kids, A to B Kid Shuttle, recently expanded from its western Henrico base of operations to Richmond and other areas of the state. (Jack Jacobs)

A to B Kid Shuttle caters to children who need a ride to after-school programs, such as a tutoring session or karate lessons. Founder Warren Prescott’s biggest motivation to start the business was to solve a problem faced by him and his wife: How to juggle their jobs and transport their children to extracurricular activities.

“At the time your kids are getting out of school and heading to these activities, you still have two or three hours of meetings and work ahead of you, and it’s a challenge to step away and actually take care of that,” Prescott said.

The turning point for Prescott was when he took his daughter to her swim program one afternoon. He was surrounded by parents working away poolside.

“I look to my left and I look to my right and there are five or six parents, laptops open, earphones in, trying to take calls, trying to get through work,” he said.

When the management consultant started A to B in October 2018, he had a single van. Now, Prescott has six vans, six drivers and an operations manager.

The business primarily operates in the Glen Allen and Short Pump areas. But recently it has made forays into new markets in Richmond, Toano and New Kent County. It regularly transports about 40 kids across all its routes.

Prescott’s clients are a mixture of parents who contract directly with his company to get their kids around, and after-school programs that need help with transportation.

The service isn’t on demand, like Uber or Lyft. Parents have to call A to B or fill out a form on the company’s website as a first step to hashing out the logistics and cost. Drivers are paid hourly.

A to B launched a formal partnership with Church Hill Activities and Tutoring this year, making that relationship the company’s first in the city after a successful pilot program started in December. Pilot programs with Dreams Gymnastics Center in Toano and Freedom Martial Arts in New Kent County kicked off last fall. A to B’s website lists seven similar programs.

“The opportunity was there,” Prescott said. “Those areas are growing as well.”

The company’s deals with after-school programs vary in terms of who picks up the tab. About half the contracts are paid by parents whose children attend a given program, and the programs pay for the other half.

Direct payment by families ranges from $85 to $160, with factors such as ride frequency and distance contributing to the cost. Direct payment by after-school programs can vary widely based on the number of vans involved and other factors.

A to B is trying to fill a gap not met by the bigger-name, on-demand ride-hailing services such as Uber or Lyft, both of which have policies that forbid drivers from transporting unaccompanied children.

Some “Uber for kids” services can be found across the country, such as VanGo, HopSkipDrive and Zum to name a few. But none of those companies operate in Richmond, according to their websites.

So long as the kid doesn’t need a car seat, A to B can take on the passenger. Most of the kids who use the service are in elementary school, Prescott said.

Prescott knows it can be a big ask to put your kids in the hands of a stranger, so A to B hires its drivers after extensive background checks and requires that applicants have a clean driving record. The drivers tend to be retired seniors. Vehicles are tracked and monitored during their trips, and the company’s operations manager monitors routes and coordinates with drivers to resolve issues such as re-routing or help in emergencies.

Prescott said the company was about “break even” when asked about its financial performance, and added it would become profitable soon.

Prescott hopes to build partnerships with more after-school programs, and hopes to see the company increase the size of its fleet and serve more of the Richmond area.

great idea. I could see using this. They should expand into private school driving

Charles, I am a driver for this amazing company and I used to have a route where I picked up a child from a private Catholoc School. You should give Warren, my friend and boss, a call if you are interested.