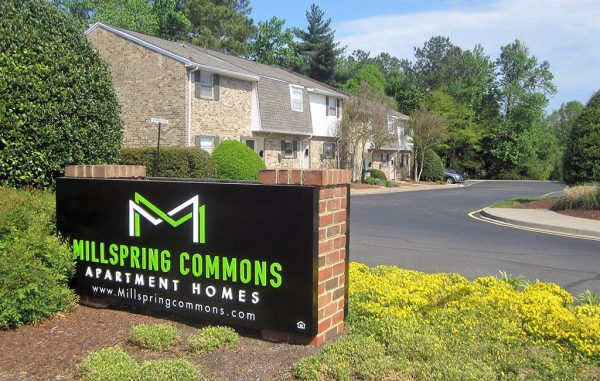 An apartment property in western Henrico with a history of changing hands about every other year is once again under new ownership, this time selling for $8 million more than it did just over two years ago.

The 159-unit Millspring Commons apartments, at the intersection of Staples Mill and Hungary Spring roads, sold Jan. 22 for $28.52 million. The sale includes an adjoining 1-acre parcel that made up $435,000 of the total purchase price.

The buyer is an affiliate of Republic Properties Corp., a Washington, D.C.-based property management firm whose portfolio includes the Potomac Mills shopping mall in Woodbridge. Its closest residential property to Richmond, according to its website, is The Courts at Yorkshire Downs apartments in Yorktown.

The seller was Aurelie Capital, a New York-based real estate private equity firm that purchased Millspring Commons – minus the additional acre – in November 2017 for $20.6 million.

The latest county assessment valued the 16-acre apartments property at just over $21.01 million, according to Henrico real estate records. Combined with the adjoining parcel, which contains a single-family residence, the total purchased property was valued at $21.66 million.

Aurelie was represented by CBRE, which had worked the other side of the deal when Aurelie, which had recently launched as a firm, purchased Millspring Commons as its first transaction. It worked locally with CBRE’s Peyton Cox, who worked the deal with D.C.-based colleagues Robert Dean, Jonathan Greenberg, Yalda Ghamarian Howell and Thomas Leachman.

CBRE also helped arrange financing for Republic Properties, according to a release.

Cox deferred comment to Aurelie principal Pavan Malhotra and Republic Properties managing director Brad Coburn. Malhotra wouldn’t comment on the sale when reached by phone this week. A message left for Coburn was not returned.

In the release, Cox described the sale as a win for the Hungary Spring Road corridor that would encourage further investment in that area. The statement said Republic plans to finish renovations that Aurelie had started on the units and use the adjacent parcel for additional amenities.

Built in 1972, Millspring Commons consists of one-, two- and three-bedroom townhome-style apartments ranging from 700 to 1,230 square feet. Monthly rents were not reflected on its website but previously ranged, in early 2018, from $995 to $1,455.

Amenities include a fitness center and a pool. The property is managed by Hampton Roads-based Drucker & Falk.

Property records show that Millspring Commons has changed hands almost every other year for the past six years, selling four times since 2014.

That year, an entity owned by California-based Fairfield Residential purchased the complex for $14.52 million. Two years later, in 2016, an entity controlled by Florida-based Electra America paid $18.18 million for the property as part of a 12-property portfolio.

Why is this particular property always changing hands? What’s so special about it?