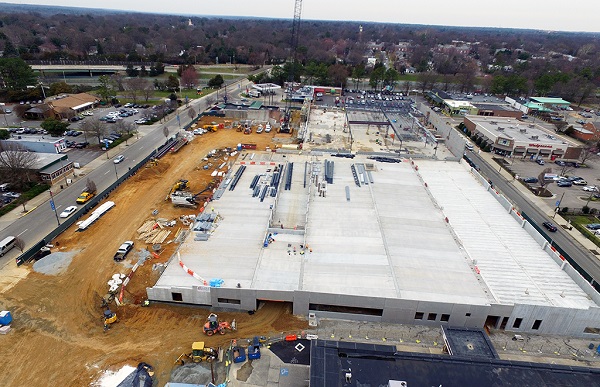 Crews continue to dig in on Carytown Exchange, which encompasses an entire block in the busy neighborhood. (Michael Schwartz)

The Carytown ABC store, among the busiest in the state, is planning a move down the street to join a massive new Publix-anchored retail development.

ABC plans to pluck its current store at 10 North Thompson St. and place it in Carytown Exchange, a shopping center under construction across the road.

It’s the first potential new tenant other than Publix to publicly indicate interest in the new development, a $40 million project led by Florida-based Regency Centers.

“Virginia ABC is in the preliminary stages of consideration of a new store in the Carytown Exchange development,” ABC spokeswoman Dawn Eischen said in an email. “This location will allow us to meet market demands and better serve our customers.”

A lease hasn’t been signed yet, but ABC has posted a notice at the development to indicate its interest in the location and to gather community feedback, Eischen said.

The Thompson Street store, which sits behind Elwood Thompson’s, was the fifth-highest-grossing location among all ABC retail outlets in fiscal year 2019, according to the agency’s annual report. The store grossed $7.6 million in sales.

If a lease is signed, the store is anticipated to open in either the spring or summer of 2021.

ABC doesn’t have a cost projection for what it will take to move to the new location.

The ABC store would join Publix and more than 20 other storefronts at the upcoming Carytown Exchange, which is taking shape on the site of the former Richmond Shopping Center. The project is bordered by Thompson, Cary and Nansemond streets, and Ellwood Avenue, and will house 120,000 square feet of retail space.

A CVS is under development, though it’s a holdover from Richmond Shopping Center. Regency’s web page for the development listed all the units, except for the Publix and the CVS, as available for rent Friday afternoon. Unit sizes range from 1,164 square feet to 5,770 square feet.

The Atlantic Union Bank also has a branch on that block at the corner of Thompson and Cary streets.

Would be nice to see the one in Scott’s Addition get a remodel or move to a new building, Love the look of the ABC store on Pouncey track/ Pump Rd in Short Pump!

I’m glad to see them move but of course they will be the only ones that can afford to rent in the new exchange at $45 per square foot. It is obvious the developers only want national chains in that space and not the small businesses that make Carytown so special. What a shame. I have been a successful retailer in Cary town for 24 years and they would not even discuss options with me.

Lisa has been at the core and supported the community for many years, her retail stores are great and it is a shame for them to not consider working with her.

Jim Ashby I am handling leasing of the project along with two other associates with our firm. We are speaking with local, regional and national tenants. The statement the developer only wants national chains is not accurate by any means. Please call me at 648-5881 to discuss the project as I don’t believe we’ve spoken. Thank you.

I like that one of the busiest VABC stores in VA only has four parking spaces.