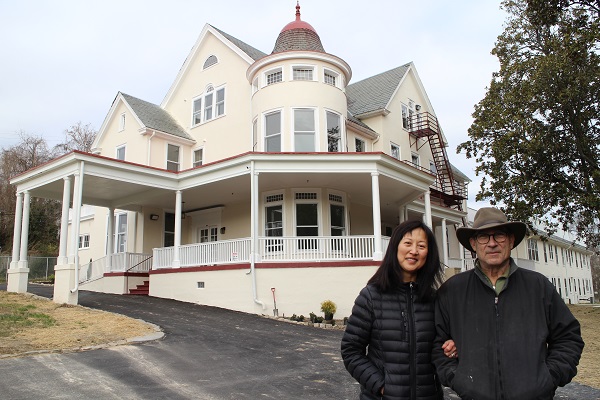 Clark and Monica Glave outside the restored Barton Mansion, which they’ve converted into apartments. (Photos by Jonathan Spiers)

Weeks before coronavirus took hold of the public consciousness, a years-long revival of a Northside neighborhood namesake was coming to fruition in Southern Barton Heights, where local developer Clark Glavé was putting the finishing touches on his multimillion-dollar renovation of a 19th-century mansion that’s seen its fair share of global viral outbreaks. 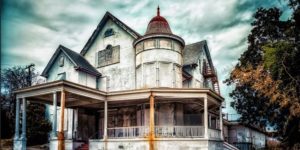 The 19th-century house as it previously appeared. (Courtesy Clark Glave)

The 20,000-square-foot Barton Mansion at 2112 Monteiro Ave. has been added onto over decades through its various incarnations as a residence, a nursing home, a home for unwed mothers, a sanitarium and, more notable of late, a polio treatment center. It’s entering its next chapter as an assortment of 17 apartments, each with a distinct floor plan and story to tell.

There’s “The Hydrotherapy Room,” “The Birthing Room,” “The Billiards Room,” “The Operating Suite” and “The Escape Room,” to name a few of the apartment themes inspired from former uses. Eleven of the units have been leased since January, with several tenants telling Glavé they were drawn specifically by the property’s history.

Of “The Operating Suite,” with its white-tiled floor turned into an apartment kitchen, Glavé remarked while giving a tour of the building, “The guy who rented it said he liked that there’s a story to it.” 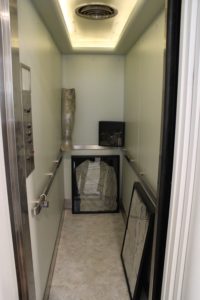 The stretcher elevator with framed pajamas inside. 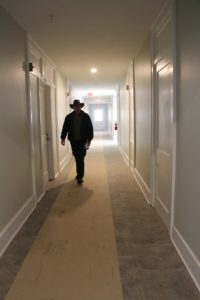 The addition hallways, after the renovation.

There’s the narrow, inoperable stretcher elevator with picture-framed pajamas that Glavé retrieved from a junk heap on the property. And there’s the long, linear hallways in the hospital wing that scream “The Shining,” complete with service-request lights that Glavé left intact above the former patient-room doors.

While the massive undertaking has revealed traces of history once hidden within the structure’s previously boarded-up walls and windows, Glavé said he fell short of any grim discoveries.

“No bodies,” he joked of his finds during the project. “I was looking for something creepy, but nothing came along.”

Such comments received repeated admonishments from Glavé’s wife, Monica, who helped with the project and rents out the units with him.

“Don’t say that!” she insisted. “I think this house is happy.” 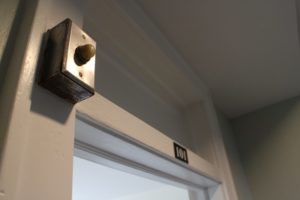 Glavé, whose restorations around town include the old gatehouse at Hollywood Cemetery, got started on Barton Mansion after coming across it on a bicycle ride years ago. The son of Glavé & Holmes Architecture namesake James Glavé, he said he approached the home’s owner and struck a deal within minutes for the boarded-up property, which had become a neighborhood eyesore.

“This is what I do. I look for the worst-looking house on the block,” said Glavé, whose Ark Construction and Development Corp. led the renovation. “I like them nasty; I like the roof bad and the back wall caving in. I like a challenge. This one certainly had all that.” 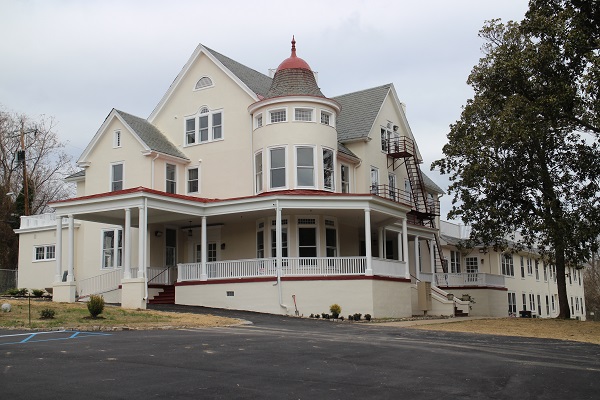 The Queen Anne-style structure as viewed from the street.

Built in 1890 by Barton Heights developer James Barton, the Queen Anne-style mansion, also called Corner Minor, had fallen into disrepair since its days as a nursing home, which Glavé said was shut down in 2000. Before that, it served as a as a polio hospital in the 1920s, then as a sanitarium in the ’40s, he said.

“That’s when some of the more interesting things happened in the operating room,” he said. 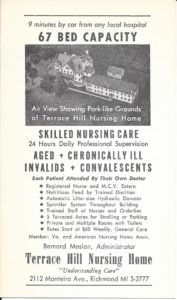 An advertisement from the property’s days as Terrace Hill Nursing Home.

Glavé purchased two of the three parcels that make up the 5-acre property in 2014 for $425,000. He acquired the third parcel the next year, but he said it would be several years later before he could start work in earnest due to various permitting and permissions required.

Post-renovation, the house parcel was valued in the latest city assessment at nearly $3 million, property records show. The two land parcels are assessed at $390,000 combined.

Glavé put the overall cost of the project, which involved historic rehab tax credits, at $3.5 million. He said financing was provided by SonaBank and Bucci Zeugner, an executive with financial firm Davenport & Co. Zeugner’s father had been an investor in some of Glavé’s earlier projects, he said.

Among the pricier units are the ones that share the original house’s turret, with curved bay windows providing panoramic views of the neighborhood and the downtown city skyline. 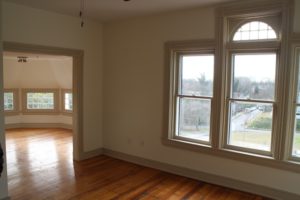 One of the turret units.

The second-story turret unit, named “The Birthing Room,” was the mansion’s original bedroom. Like other units in the house, it retains several original features, such as doors and heart pine flooring that in some rooms, Glavé said, had been buried under multiple layers of subsequent flooring.

Looking out from atop the flag tower, above the turret’s original bell-shaped roof and off-limits to residents, Glavé took in the view, as well as the scope of the project.

“Six and a half years of my life, man. That’s a long time,” he said. “It was cool because it had more history than others I’ve worked on. I really like the history, if you can’t tell.”

And he’s not done yet. 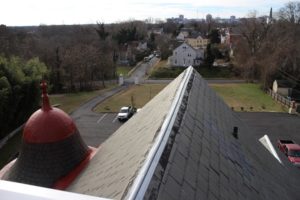 The view from the flag tower.

Glavé said his dream is to build a seven- or eight-story condo tower on land between the mansion and its entrance off Vale Street, with the new building positioned to preserve the house’s views. He said he and Monica would reside in the building, which he envisions with a façade of glass, concrete and steel.

He said he’s also planning to build a U-shaped apartment building on a fenced-off lot behind Barton Mansion, and he’s eyeing a home lot along Monteiro Avenue that he hopes to improve. He also wants to put a coffee shop or restaurant along Vale Street.

As for Barton Mansion, just as the house led the way for the development of Barton Heights, Glavé said the property’s turnaround has had a noticeable effect on the neighborhood today, with several other boarded-up homes nearby getting rehabbed.

When he started six years ago, Glavé said, “There were 17 boarded-up houses if you went two blocks in any direction. Today, there is one.”

“Since we’ve been here, the rate of growth, people moving in, it’s pretty staggering,” Monica said.

“I was thinking that I was going to get here, finish this thing, and have to hang out five to 10 years before the neighborhood caught up with me,” Glavé said. “We’re used to digging deep. We buy the worst thing on the block and hope to attract other people to invest behind us.” 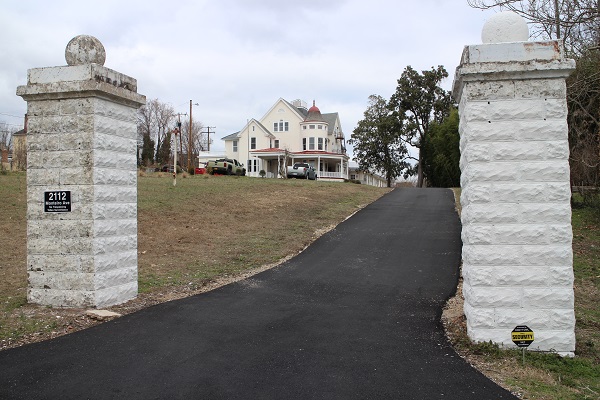 The property’s entrance off Vale Street.

You know you can click on the smaller ones and make them larger right?

Nice! Great to see Barton Heights is getting some love. The historical ad is a cool addition to the story.

What an incredible restoration!! Kudos to you both! Continued success!!

Seems like a heck of a project. Nice job!

Congrats to Clarke and Monica. I took the “before” tour with Historic Richmond. There is definitely some lively history there. Keep up the good preservation work 🙂 Coleen