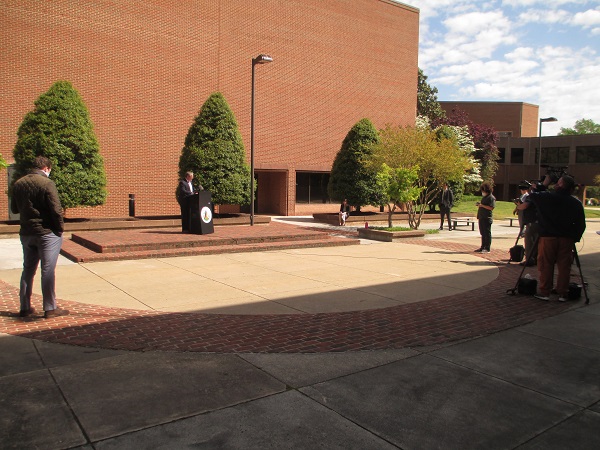 Henrico officials held a press briefing on the revised budget outside the county’s administration building Tuesday. (Photos by Jonathan Spiers)

At the heart of its multifaceted response to the coronavirus downturn, Henrico County is reducing its proposed fiscal plan for the coming budget year by 7 percent, in anticipation of nearly $100 million in lost revenue.

County Manager John Vithoulkas presented his revised plan for fiscal year 2021 to Henrico supervisors Tuesday. The $1.3 billion proposal’s general operating fund is about $99 million less than the original plan presented in early March, before the pandemic began affecting the local economy, and nearly $45 million less than the current general fund. 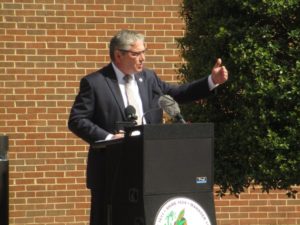 “We are approaching the apex of this COVID-19 storm,” Henrico County Manager John Vithoulkas said in the briefing.

Cut from the proposal is a 3 percent merit-based pay increase for employees, as well as additional staffing for school counselors. The new plan avoids any layoffs or furloughs, amid a previously imposed hiring freeze on 310 full-time positions that are currently vacant.

Capital projects that have yet to be started will be put on hold, such as a planned addition to Hungary Creek Middle School, a new elementary school near the River Mill development and a new South Station for police.

Of the $99 million reduction to the county’s general fund, now proposed to total $894 million, Vithoulkas said $12.8 million in department budgetary cuts still need to be identified: $8 million from county schools and $4.8 million from general government.

While he stressed that a goal is to retain existing employees, Vithoulkas said as many as 350 of the county’s 4,000 full-time jobs may be at risk if further reductions – the $12.8 million he mentioned – are not made to the proposal.

To that end, he recommended that the board hold off voting on the budget until May 12, giving county schools and government staff two more weeks to determine potential cuts, while at the same time giving taxpayers more time to weigh in on those decisions.

A public hearing on the budget was left open Tuesday evening until the board’s May 12 meeting, extending the amount of time for public input. Comments will be received until then via email at [email protected].

“You are essential to this process,” Vithoulkas said at a press conference earlier in the day, referring to the county’s residents and businesses. “It will be the longest public hearing in this county’s history. We’re just going to do it a little differently.”

Stressing the pandemic’s impacts on consumer behavior, which in turn affects the county’s coffers through decreased revenue from local taxes and fees, Vithoulkas said unemployment in Henrico had reached 8 percent, with more than 16,000 unemployment claims expected to be filed by the end of this week. Of 193,000 jobs in the county, he said 35,000 are in the hard-hit hospitality industry.

Directing his comments to county businesses and other taxpayers, Vithoulkas said Tuesday, “You are the sole funding source for our county and our school operations. You carry the weight of our work in your wallets, and it’s our responsibility and duty to mitigate the impact of this economic downturn while continuing to provide the highest level of service.”

With that in mind, the new plan retains the current real estate tax rate of 87 cents per $100 of assessed value, as well as a previously planned increase to the county’s exemption threshold for business license taxes.

The increase, from $400,000 to $500,000, is expected to exempt nearly 15,000 businesses, or more than 78 percent of all licensable businesses in the county, from paying the so-called BPOL tax, or Business, Professional, Occupational License tax.

Vithoulkas said the adjustment, which follows similar increases to the threshold in recent years, is “specifically intended for our small businesses, as we cannot and will not pass along the burden to our businesses and residents who may not know the next time that they will have a steady income.”

While he’s asking county schools for the $8 million in budgetary cuts, and to balance its proposal to within 1 percent below the current schools budget, Vithoulkas said the percentage of his budget proposal allotted to schools remains roughly the same, increasing slightly from 56 percent to 57 percent. He said funding for public safety likewise remains a priority.

Deputy Finance Director Meghan Coates said the county will continue to review and revisit the budget, using a quarterly appropriations process as it monitors consumer behavior trends going forward. She said the revised proposal starts that process from a baseline she described as “the lowest of lows.”

“We do believe that this is going to be a fairly quick recovery for us, but there will need to be some significant short-term sacrifice to ensure our long-term success,” Coates said. “That’s what the goal is for us here.”

Also on Tuesday, county supervisors signed off on an ordinance to allow the planning director to approve development plans and preliminary subdivision plats, a task previously within the purview of the Planning Commission but temporarily transferred to the director as a public health measure.

The move, which is allowed by state law, is intended to speed up the development process in the county and limit opportunities for the virus to be transmitted during the pandemic. The ordinance eliminates the need for the commission to meet monthly specifically to consider development plans and subdivision plats, the process for which involves public hearings.

The change is in effect as long as the county’s ongoing state of emergency is in effect. The ordinance doesn’t affect decisions on rezonings, provisional-use permits or special-use permits, which the commission will continue to handle.

State law requires a landowner get approval from the Planning Commission or an agent designated by a locality’s governing body if the landowner wants to subdivide land. The commission previously met monthly to consider such requests, and also considered development plans at those times. Development plans fall under the same section of the Code of Virginia.

The supervisors previously would approve development plans on county-owned and county-leased facilities, as well as some additional types of properties. With the ordinance approved, the planning director will handle that as well. The Planning Commission voted to recommend the board approve the ordinance at its meeting earlier in the day.