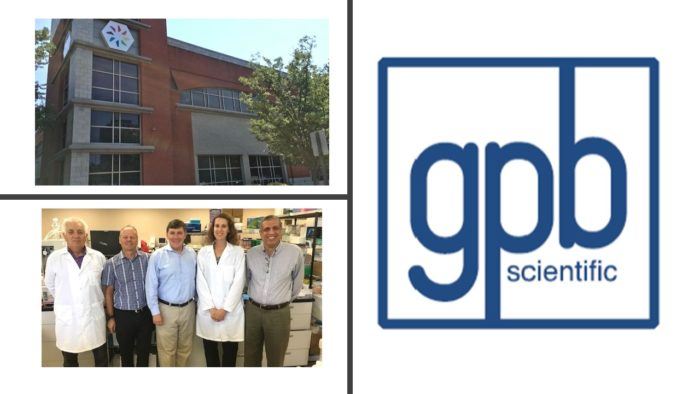 GPB Scientific is based out of the Virginia Biotechnology Research Park downtown. (BizSense file photos)

Looking to expand on its capabilities, a downtown-based medical research firm has just received an eight-figure shot in the arm.

GPB Scientific, which has developed a device and system that helps separate and extract certain cells from people’s blood aimed at disease therapies, this month announced it had received a capital infusion of $25.5 million from venture capital firms Vensana Capital and Amgen Ventures.

The capital will allow GPB to scale up production of its Curate cell-processing system, which it debuted in January, and also drive further clinical studies. The Curate device is designed to separate out cells from blood samples more efficiently, and thereby more efficiently create the raw material needed for cell therapies for cancer and other diseases.

“They saw that the technology could be very empowering for the whole field,” said Mike Grisham, GPB CEO and managing member, referring to Vensana Capital and Amgen Ventures. GPB intends to sell its Curate system devices to major biological pharmaceutical companies to be used in their manufacturing processes.

GPB Scientific was founded in 2002. The company has a local facility in the Virginia BioTechnology Research Park at 800 E. Leigh St. and an office in San Diego. The company has nine employees between its two offices. Prior to the most recent capital raise, the company had raised $12.5 million from investors and another $4 million in grants to power its work through the years. The company is still pre-revenue.

A particular focus of the technology is its application for cell therapies for cancer, a treatment that relies on separating T-cells from blood samples.

T-cells – one of the types of blood cells in humans – fight off viruses and bacteria when they invade the body. But cancer is good at avoiding the body’s immune system, including T-cells.

Researchers in other organizations and labs are working on FDA-approved cancer treatments that are looking at how T-cells can be modified to recognize and attack cancer. Grisham said the process of modifying the cells is basically like slapping night-vision goggles on T-cells to allow them to more easily identify cancer. In GPB’s therapy treatment, the modified T-cells are introduced into a cancer patient’s blood with the aim of fighting off cancer, Grisham said.

GPB’s system looks to decrease that amount of cell destruction by using a gentler process that ditches the strong physical forces and chemicals that characterize existing technologies. The process separates out blood cells based on size, kind of like a coin sorter. The Curate system then uses a centrifugal washing cycle to weed out unwanted materials that the company said is more efficient than existing methods, meaning fewer washing cycles and less cell loss.

The company’s goal, Grisham said, is for its system to help lower the cost of cell therapies, which can run $500,000 to $800,000 using current technology. The fully automated Curate system lowers the cost per dose by as much as half, Grisham said.