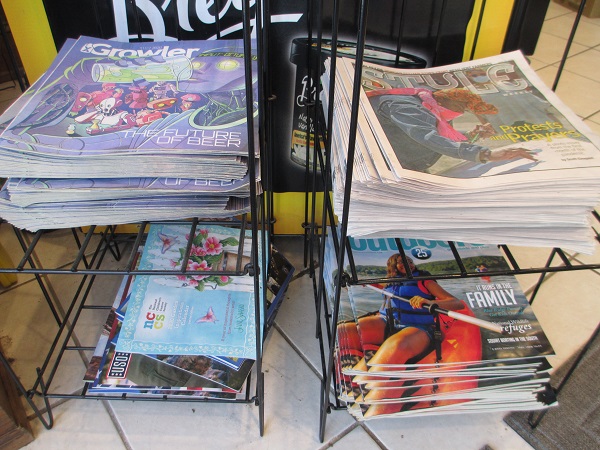 One of the now-fewer news racks to be found around town. (Jonathan Spiers)

Tom Lappas isn’t the only Richmond-area newsman who’s had to say the three words most newspaper publishers try to avoid.

Around the time that Lappas, founder of the nearly 20-year-old Henrico Citizen newspaper, announced in late March that it was suspending its twice-monthly print version indefinitely, John Reinhold was likewise making the call to “stop the presses” for RVA Magazine – and not because the 15-year-old culture and politics pub had a late-breaking story or an error to fix.

And it’s not just those papers that are pulling back on print. Next week, the Chesterfield Observer is reducing its weekly distribution, stopping mail deliveries of its 25-year-old paper in two of the county’s northern ZIP codes.

Like many of their peers across the country, some local news outlets are being hit hard by the economic downturn brought on by the coronavirus pandemic, particularly those that put out print editions. 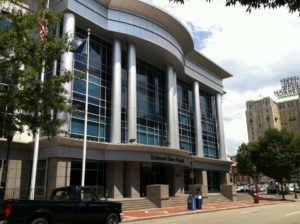 Larger papers like the Times-Dispatch also are not immune to the downturn – its parent company, Lee Enterprises, recently handed down two weeks’ worth of required furloughs for all newspaper employees through June. But it’s the smaller, independently owned publications in the region that are drastically changing how they do business.

In some cases, they’re saying goodbye – for now or potentially forever – to the traditional print product that helped get them started.

Lappas, a UR grad who has been publishing the 15,000-circulation Henrico Citizen since 2001, said he had already been considering going digital-only when the economic shutdown, and the loss of a major advertiser, made the decision for him. 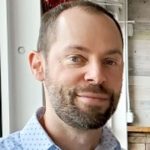 “The reality for me is roughly 75 percent of my expenses are tied up in printing and distributing this thing every month, so if, by eliminating that, it frees us up to now invest in more online options and really go all in on this for a period of time, it’s almost like a trial run to see what that looks like,” Lappas said.

“That’s something that I have been thinking about for a couple years anyway. I wouldn’t have necessarily chosen this as the reason to dive into it full bore, but here we are.”

Frank McCracken, who with wife Carol purchased the Chesterfield Observer in 2014, likewise cited a drop in advertising, as well as the loss of events to put in its event listings, as contributing to his decision to pull back on print. He said a regular ad from Uptown Alley promoting the bowling alley’s weekly concerts was one of the first to go.

“That was $1,000 gone in a week, right from the start,” he said. “Advertisers have cut back because they’re either closed or not making enough money to advertise, and certainly that’s hurt.”

As a result, McCracken, the Observer’s publisher, said the publication next week is eliminating mail deliveries in two of its ZIP codes – 23235 and 23236 – bringing its typically 70,000-plus circulation down to about 60,000. 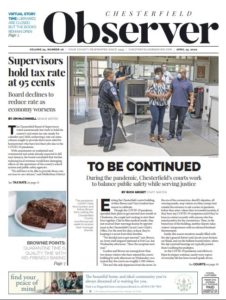 The front page of the April 15 edition of the Chesterfield Observer.

“I don’t want to have to do that. I still think there are readers out there who need to know what’s going on as much as possible,” he said. “But I can’t keep on paying all of our operating expenses and employees (with) half the revenue or less coming in.”

McCracken said other cost-cutting measures have included pay cuts for the Observer’s roughly 15 employees, though no layoffs as of yet.

“We’re not looking to cut any employees,” he said.

Of the paper’s 81 distribution drops across Chesterfield, McCracken said 36 of those businesses are closed, further limiting the Observer’s reach.

Lappas said similar circumstances with his routes factored into his decision as well, noting the loss of foot traffic at the Citizen’s usual outposts amid stay-at-home guidelines.

“I’m not going to print 15,000 if they’re just going to sit there, and many of the places we distribute from are closed, so it wouldn’t make sense to print them anyway,” Lappas said.

Reinhold, who has led RVA Mag for five years, said his team likewise has put their focus online while cutting back to working part-time hours. He said the magazine’s content relies heavily on events at smaller venues, bars and restaurants, which are now closed. 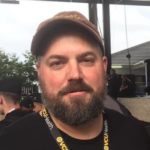 “With everything going on right now, our print media is kind of on hold,” said Reinhold, who serves as president of RVA Mag and as acting CEO of parent company Inkwell Ventures, which also manages GayRVA.com and publishes its annual Pride Guides.

“If people aren’t gathering in places, it’s hard to do a distribution, because you don’t know what’s open and where you can distribute,” he said. “We’re trying to see what happens. A lot of it is trying to figure out how long this is going to go on. We need to come out of the whole quarantine thing to understand where we might be with print media.”

Reinhold said the decision to stop printing came just weeks before RVA Mag was set to celebrate its 15th anniversary. A party at Gallery 5 that was to be held last weekend was reimagined online, as part of a live-stream concert series called RVA Radio that Reinhold said is helping to support and give exposure to artists and businesses. 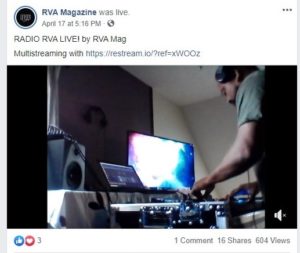 One of the live-stream concerts that RVA Mag has added to its online output.

To that end, RVA Mag is raising funds to support artists and businesses through sales of limited-edition T-shirts, with a percentage of proceeds going to nonprofit Feed More.

It’s also looking to support itself, soliciting donations directly from readers – an approach that Lappas also is doing with the Citizen, both through direct donations and a tax-deductible option in which donors can give to a Henrico nonprofit of their choice. Donations of $15 or more gives those groups a week’s worth of free ads on the Citizen’s website.

In announcing the potential end of his print paper, Lappas also gave away two months’ worth of digital ads to small businesses in Henrico with 25 employees of less. Of about 30 that applied, Lappas said he selected 10. 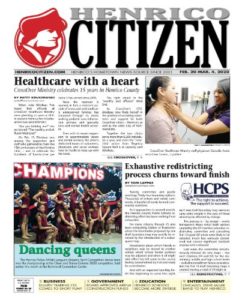 The February 20-March 4 edition of the Henrico Citizen.

“I felt like that that’s almost our duty to give something back, if we can, to others that are in the same boat, not really knowing what’s coming and not being able to afford exposure,” Lappas said. “It’s just a different way to try to help some organizations that probably need the help right now, and obviously, to help us too.”

Not every area print publication is pulling back or suspending distribution. Style Weekly, while thinner in recent weeks with noticeably fewer ads, continues to fill news racks and boxes around town. A query from BizSense was deferred to Style’s parent company, Tribune Publishing, which declined comment.

This week, the Chicago-based newspaper chain announced three weeks’ worth of furloughs for nonunion employees, companywide, making between $40,000 and $67,000 per year. Tribune previously had announced permanent pay cuts of 2 to 10 percent for higher-salaried employees.

Other area publications are seeing their business hold steady.

John-Lawrence Smith, publisher of Richmond-based Virginia Living magazine, said the bimonthly, paid-subscription magazine has had to delete its events pages and tweak some of its editorial content in light of the pandemic. But he said the magazine, which typically has a strong tourism focus, has so far been spared in terms of advertising, despite the economic impacts on that industry.

“We’re still selling, and we’re signing new deals every day, which has been great,” he said. “I think most people, they want to get back to normal and they want to be successful and be open and sell, so they’re trying as hard as they can. But it certainly is stressful.”

‘In the same boat’

McCracken, with the Observer, said the reopening of businesses will determine local papers’ long-term fate.

“We’ve got to make it through this thing and businesses have got to be back open so advertisers can start advertising again,” he said. “That’s what we’re all focused on, watching all of our expenses.”

“We actually just received that in our bank account today, so that was nice,” he said. “But $10,000, with some of the bills we have, is more like a Band-Aid when you need a tourniquet.” 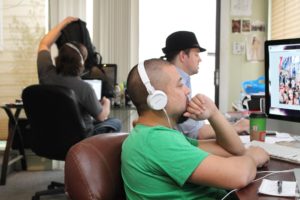 Reinhold said he’s still waiting to hear back on his SBA loan application. Meantime, he said RVA Mag’s staff will keep the news outlet going as long as they can – even if, for him, that means working without pay.

“We can keep it going for a while; we can operate on a very small fashion indefinitely on some level,” he said. “That means that the owners of this business will be working for free, not making money off the business.

“We’re kind of in a pause, and we’re just trying to support people,” Reinhold said, referring to both his staff and advertisers. “We’re not throwing out new invoices, and we’re not collecting on these accounts. We’re just saying, ‘We’re here, we know you’re here, we’re in the same boat; we’re all trying for the SBA loans and trying to hook us a future where we can get back to some sort of normal.’”

How many folks here have a county publication that goes right from the mailbox to the trash can? Seems to me this was a long time coming for this industry? The one I see is nothing but ads for deck replacement and siding, maybe teeth whitening. In the age of digital, I think covid19 was the straw that broke the proverbial camels back.

Spam calls to my cell phone seem to have fallen off a cliff as well.

I think you’re describing the ad rag that the RTD puts out that attempts to masquerade as a newspaper but really has no news at all. I get that thing too and yeah, I trash it immediately. But the publications in this article are legitimate. It’s a shame some are having to cut back in print, but I do think some may actually do better online exclusively. Time will tell.

The Sunday Direct! I hope and pray we will no longer have to see that unwanted rag littering Richmond neighborhoods.