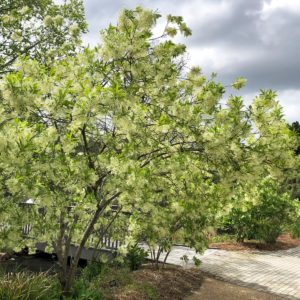 Lewis Ginter is rehiring employees with the help of a recently acquired PPP loan several weeks after it laid off 80 percent of its workers. (Courtesy Lewis Ginter)

Several weeks after Lewis Ginter Botanical Garden announced the layoff of 80 percent of its staff in response to the coronavirus pandemic, the nonprofit looks to rehire some of those positions – at least temporarily — using federal aid.

Lewis Ginter received about $709,000 from a CARES Act Paycheck Protection Program loan on April 21. With that money, it plans to rehire some positions it cut and also restore the reduced pay of the skeleton crew it left in place to tend the garden until it could reopen.

The nonprofit laid off 89 of its 107 employees to cut expenditures after the pandemic and social distancing forced it to close, and dried up its admission tickets and facilities rental revenues, the nonprofit announced in a statement March 31. More than 65 percent of the garden’s annual operating budget comes from earned income.

As per the loan requirements, at least 75 percent of the funding must go toward wages. The rest will be spent on utilities and other expenses, Lewis Ginter spokeswoman Beth Monroe said. The organization is in the midst of rehiring, and at this time 22 former employees are returning.

“Our goal is to rehire as many as possible who can safely help with caretaking functions,” Monroe said. “Staff are being rehired in stages in order for the process to be orderly and safe.”

In a statement on its website, Lewis Ginter cautioned there were “many outstanding questions” about the use of the funds and it hopes for more information from the government on its use in the near future.

The loan provides funding for eight weeks of employment, meaning that if things remain as they are, those jobs again will be on the chopping block June 15.

Those rehired will be tasked with emergency caretaking of Lewis Ginter’s 50 acres of gardens, and will support the horticulturalists who initially were retained to maintain the garden.

It’s still unclear when Lewis Ginter, which closed March 15, will reopen to the public. The nonprofit’s leadership is banking that between layoffs and a pull from its endowment, Lewis Ginter will weather the downturn.

Much like the business world, the nonprofit sector has been disrupted by the pandemic. In response, the Community Foundation for a greater Richmond and two partner organizations launched a $3 million fund to provide financial assistance to nonprofit organizations that offer community services in late March.

Another outdoors-oriented nonprofit, the Virginia Capital Trail Foundation, reported increased usage on its namesake trail as people seek an escape from the pandemic.