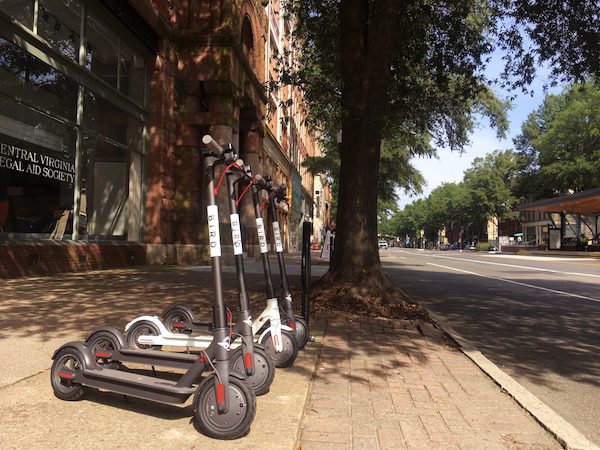 Bird has kicked off a phased rollout to reintroduce their scooters to markets. Above, a quartet of scooters along Broad Street. (BizSense file photo)

An electric scooter rental company that pulled out of Richmond due to the coronavirus pandemic is migrating back to the city’s streets.

Bird, the West Coast-based startup that removed its scooters from Richmond’s streets in March as a response to the pandemic, is eyeing a phased rollout to reintroduce the devices locally and in other markets.

The company on April 24 announced phase one of that rollout, which in addition to Richmond includes other U.S. and international cities such as Austin, Texas; Los Angeles; Tel Aviv; and Antwerp, Belgium.

The rollout in Richmond started last week, with Bird saying it would utilize expanded sanitation practices as it returns scooters to markets. Bird operates in more than 100 cities across the globe, according to the company’s website.

“We’ve begun a measured, methodical approach to fleet rollouts in partnership with cities around the world,” a company spokeswoman said in an email, adding that the move would help facilitate essential tasks such as commutes, grocery shopping and medical appointments.

The spokeswoman didn’t respond to questions about how long the local rollout would take to complete, how many scooters would be placed in Richmond or what the company is expecting in terms of local use.

Bird’s retreat in March came just months after it announced a $275 million capital raise, which it then upped to $350 million in January due to investor demand to get in on the action. Though it raised $75 million in January, Bird laid off more than 400 employees as a result of the disruptions caused by the coronavirus pandemic in late March, the Santa Monica Mirror reported.

When Bird dropped in on Richmond unannounced in 2018, it came with hundreds of scooters. The city impounded the devices left on sidewalks because they violated right-of-way laws at the time. The city later adopted a licensing program, and Bird relaunched in Richmond last October.

Bolt Mobility, the other scooter company with a presence in Richmond, didn’t remove its devices in March like Bird did, instead arguing that the scooters represent a more sanitary alternative to public transportation for users who need to be out and about. 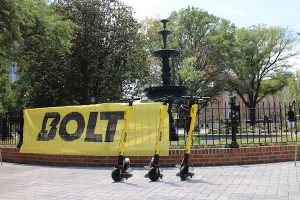 In the past weeks, the Florida-based company has stayed the course, and Will Nicholas, Bolt executive vice president of operations, said usage of the scooters hasn’t fallen off with the pandemic.

“We have seen steady ridership through the pandemic as people recognize scooters are a great form of individualized transportation – a nice alternative to a crowded bus or shared vehicle,” Nicholas said in an email.

Bolt has about 200 scooters deployed in Richmond, and the company kept on its local cohort of five full-time employees as it has taken increased steps to clean and disinfect its devices, Nicholas said.

The company also has launched some initiatives during the pandemic, including a program that seeks to connect small businesses that need to make deliveries with Bolt scooters. It also introduced self-cleaning NanoSeptic mats to scooter handlebars and brake levers, and launched an update on its previous mobile app.

Through its small business program, Bolt has provided scooters locally to Two Squirrels, a collective of restaurant workers based in Scott’s Addition that operates a delivery service, Nicholas said. He said the company is on the lookout to work with more local businesses.

I understand that privately held companies are not required to publicly report profit and loss information. Nevertheless, it would be interesting to see a story that details the financial health of these scooter companies instead of the glowing press releases that boast about NanoSeptic mats and the hundreds of millions of dollars that investors are willing to throw at them.

It would be interesting if Richmond could take a penny or two out of these rentals and put them into a sidewalk repair trust fund much how the gas tax funds highway repairs.