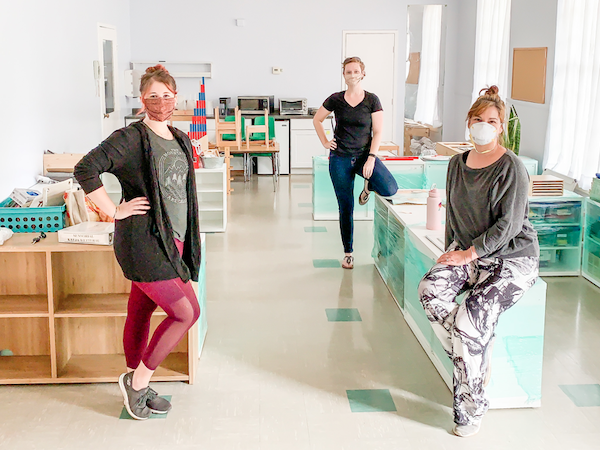 A small, 2-year-old Montessori school is trading Northern Henrico for Lakeside in a bid to get closer to its target student demographic.

Glen Allen Community Montessori School has rebranded as Wild Fern Montessori School as it prepares to move to larger facilities at Overbrook Presbyterian Church at 2605 Dumbarton Road, with an eye toward a fall opening.

The nonprofit school has operated out of the Unitarian Universalist Community Church of Glen Allen, at 11105 Cauthorne Road, since it opened in 2018. The move is intended to bring the school closer to families with lower incomes 一 both to make the commute easier for current students and entice new ones to join the school.

“To go all the way out to Wyndham and back was hard, understandably,” said Brei Stevenson, the school’s executive director. “When we were looking for a new place, we wanted to move away from Wyndham and find an area that could really use us.”

Stevenson noted Wyndham, an area of Glen Allen near the school’s original location, houses many higher-income households than Lakeside. In moving to Lakeside, the school is betting it will be in a more strategic position and be a more attractive option for lower-income families.

And given the move, a name change was deemed in order. Wild Fern was selected because the fern is a symbol of youth and hope, Stevenson said.

Wild Fern will be in bigger digs moving forward, graduating from a single large classroom at the Unitarian Universalist church to three classrooms in Lakeside that combined are larger than the Glen Allen accommodations. The school leases its new space from Overbrook Presbyterian, using two classrooms for instruction and the third as an administrative space.

The school’s existing primary classroom program for children 3 to 6 will be joined by a new play program, Montessori & Me, for children 15 months to 3 years in the fall. The school hopes the program, in addition to expanding its services to more children, will create a pipeline to its primary program.

Wild Fern’s new facility gives it room to expand its primary program population from about 13 to 16 students a year to 20 to 25. The eight-week Montessori & Me program is expected to accommodate 10 families, Stevenson said.

The coronavirus pandemic threw a major wrench into the school’s operations. The school shut down in mid-March, and unlike some other schools, didn’t opt to create an online-only course of study. Stevenson said that was because they felt the Montessori model wasn’t a good fit for online instruction.

While teachers continued to interact with students in an informal manner via the internet after the school closed its doors, the school ultimately decided to freeze operations and laid off its entire staff of five people.

“Just hitting the pause button felt right,” Stevenson said, adding that in stepping back, the team had a chance to take a breath and consider what the school’s future would look like. The school offered families a credit on tuition for the following school year. Wild Fern canceled its summer camp program due to the virus.

But the school was able to get a Paycheck Protection Program loan, and in doing so was able to hire back three employees. It intends to rehire the laid off part-time teaching assistant positions. The school also plans to add a new teacher, bringing the school’s workforce to six people in the fall.

“It’s been touch and go. We’ve been right there with other small businesses,” Stevenson said.

Tuition for the fall primary program hasn’t been finalized, though it’s expected to be $650-$750 a month. The toddler program will be $200. Late last week, five students had signaled intention to attend the primary classroom program in the fall, along with three to four children who intended to be part of the school’s newest program, Stevenson said.