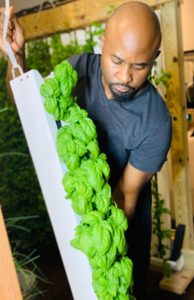 Trevor Ferguson envisions the company as a local produce source for both wholesale and retail customers in the Richmond region. (Photos courtesy Nouveau Farms)

For Trevor Ferguson, growing produce started as a hobby in his garage. That pastime has blossomed into a new agricultural startup.

The company also owns 7 acres of land in Varina, which will be used as a traditional farm. That site is near the Varina branch of the Henrico County Library.

The company formally launched as a commercial enterprise in February, and plans to begin selling to both retail and wholesale customers in the Richmond area this summer.

Ferguson’s vision is produce that’s both high-quality and low-cost, which he aims to achieve through his use of hydroponic farming and a willingness to experiment with varieties of fruits and vegetables to find what customers want.

He’s betting it’s a differentiator from big produce companies that he said tend to go for hardy varieties with long shelf lives at the expense of flavor.

The farm uses hydroponic methods, which means soil isn’t part of the equation. The method also requires less space and less water than traditional farming. Ferguson expects that will translate into more efficient operations that will keep costs low, enabling him to offer affordable products. 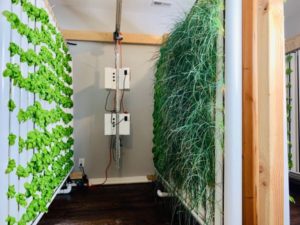 The Hull Street facility has a weekly production capacity of 180 pounds of produce.

The Varina site is being cleared and developed. Once the Varina farm is running, the operation will be able to increase its growing capacity. Ferguson, the farm’s only full-time employee, owns both the Hull Street and Varina sites.

“We’re making investments for the long haul,” he said, adding that he’s invested close to $100,000 in the operation thus far.

He also hopes to find a niche in being responsive to customers’ taste, and said he looked forward to experimenting with varieties of his crops based on customer feedback to identify types people enjoy.

Ferguson was born and raised in the Bahamas. He moved to Richmond in 2007 after he studied engineering in North Carolina. With the farm as a side gig, Ferguson works full time as a mechanical engineer and project manager for Dominion Energy.

The eating habits of Ferguson and his family drove the creation of Nouveau. Ferguson became accustomed to fresh fruit early on because fruit trees were a feature of his boyhood home. His two young children are also big fans of strawberries in particular.

“We spent a lot of money on strawberries and it was hit or miss. You buy the strawberries (at the store) and when you bite into them, they have no flavor,” he said.

Ferguson is talking with distributors for wholesale sales. Wholesale operations are expected to begin in August, while retail sales will be added in September. Retail sales will take place through the farm’s website.

Ferguson also plans to use the Varina farm as a wedding venue and vineyard. Doing so would provide additional revenue and create an agritourism experience for customers.

“We envision a place for people to relax, buy a glass of wine and pick up their produce,” he said.

I love this!! Will be checking this out when open to the public!!

Ag entrepreneurs at work. Creativity amongst the farm community is soaring.

So is this property in the former Victory Farms site?