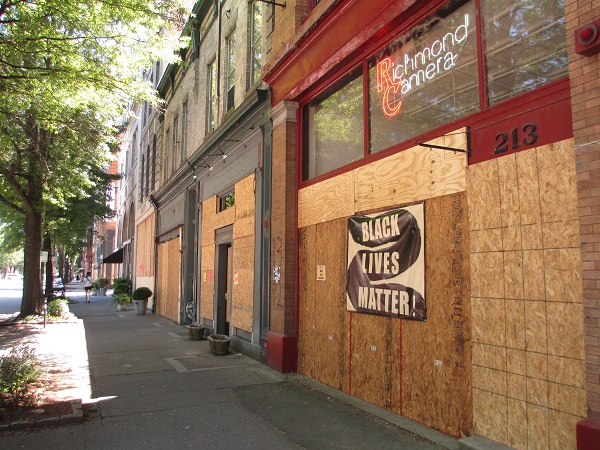 Note: This story has been updated with additional information. See the update in italics below.

Two months after an initial night of rioting left numerous downtown businesses vandalized and boarded up for weeks, financial assistance specific to their ordeal, and others since then, appears to be on the way.

In a meeting this afternoon, Richmond City Council is slated to approve a $500,000 grant program tailored to helping businesses and property owners that sustained financial losses from recent civil unrest that has occurred since the May 25 death of George Floyd in Minneapolis.

The following weekend in Richmond, multiple downtown storefronts were damaged in a night of violence that followed peaceful protests earlier in the day. Many businesses there and elsewhere in the city remain closed or boarded up due to damage sustained or to prevent potential damage as demonstrations have continued. 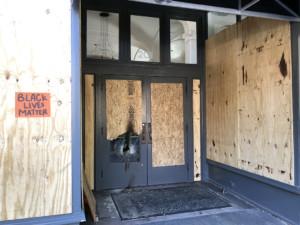 The grant program would award up to $10,000 per property, with the grants to be paid on a reimbursement basis to approved businesses, property owners and nonprofits. The city’s departments of housing and community development, economic development and minority business development will review and approve applications.

It wasn’t clear when and how grants could be applied for if council adopts the ordinance at today’s special meeting, which starts at 4 p.m. Sharon Ebert, the deputy chief administrative officer presenting the ordinance to council, was not available for comment Friday.

(Update: The city announced Monday morning that, if approved, program guidelines will be posted on the city website and applications can be submitted electronically starting Aug. 13. The grants would be for reimbursement of expenses to repair property damage, such as window repair and graffiti removal, caused by the recent civil unrest.)

The city is appropriating a total of $600,000 from the Department of Housing and Community Development’s budget last fiscal year to carry out the program. The city’s economic development authority is authorized to spend up to $13,000 on costs to administer the program.

Funding for the program is coming from unspent monies identified in the EDA’s CARE program. Not to be confused with federal CARES Act funding, the local CARE program, standing for Commercial Area Revitalization Effort, provides incentives and funding to 12 commercial corridors identified as revitalization areas.

The onetime grant program for properties affected by civil unrest is one of several initiatives the city is taking to provide financial assistance to businesses this year, most of them aimed at retaining and creating jobs amid the coronavirus pandemic and related economic shutdown. 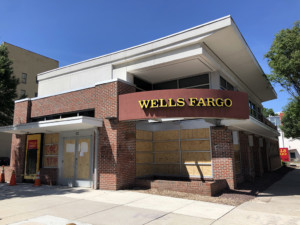 The Wells Fargo branch at East Grace and Second streets was one of the hardest-hit. (BizSense file photo)

As of July 30, the EDA has approved 48 loans totaling nearly $935,000 through its $1 million small business disaster loan program. Recipients of loans through the program were recently allowed to convert those loans to grants. The program is being funded with $1 million of the city’s $20.1 million federal CARES Act appropriation.

Another program in which the city purchased meals from restaurants to feed first responders during the pandemic ended July 10 with more than 17,000 meals served. Other efforts have included a tax amnesty program, the city’s Forward RVA website and disbursement of personal protection equipment.

The city also is working on a $3 million grant program using CARES Act dollars for businesses affected by the shutdown. In an update a month ago on the city’s COVID-19 response, economic development director Leonard Sledge said that program remains in the works but more work was needed to identify best practices before it could be rolled out.

I love how we can spend $1.8 million dollars removing statues overnight (and perhaps, illegally), but it takes months to help the struggling businesses (that account for a large portion of the city’s revenue), many of whom remain boarded up.

What I would like to know is how do concerned citizens get the impeachment process started again the governor. He has clearly neglected his duties of his office by not enforcing the law? Also can a mayor be impeached?

Oh good, so the tax payers get to pay for the police who stood by and did nothing. Then turn around and pay for all the damages the rioters caused. Meanwhile the insurgents that caused all the damages walk free. Great logic.