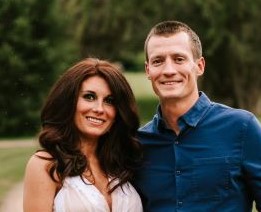 The co-owners of the home-based company in Midlothian, Jay and Alexis Carpenter, are keeping their full-time jobs at Fahrenheit Advisors and NVR Mortgage. (Photos courtesy Handley)

The couple earlier this year launched Handley Watches, an online-based wristwatch brand aimed at professionals looking for a no-frills watch with a versatile style.

Jay, whose day job is as director of business development at Fahrenheit Advisors in Scott’s Addition, said they were inspired by the athleisure trend and sought to bring that sensibility to watches.

“Why can’t we do that in the watch world?” he said.

The company did a soft launch in February and lists eight watches that cost $185 to $245 apiece on its website.

Handley has deals with manufacturers that offer specific watch cases and dial molds. Handley coordinates with the manufacturer to design and customize the colors of the dials, hands and silicone bands.

Originally, Handley sought to use a single vendor for its entire supply chain. As the company came to understand various manufacturers have different specialties, it shifted its production to an assembly model, mixing and matching pieces of the watches, which are then put together in Midlothian by Handley. 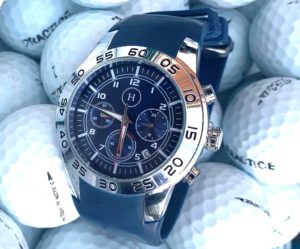 “It started with a pretty extensive trial and error process with different vendors until we were able to get the right balance of quality, customization, price, and consistency,” Jay said.

In August, Handley inked an endorsement deal with pro golfer Harold Varner III. Terms of the deal weren’t disclosed. Varner and the company are working together on a limited-run piece.

Jay declined to say how much money has been invested in the company, but it has come from the couple’s own pockets. He said the company could kick off a capital raise at some point in the future.

Jay and Alexis are co-owners and the only employees of the home-based company in Midlothian. Both are keeping their other full-time gigs. Alexis is a learning and development specialist for NVR Mortgage.

For now, Handley has a direct-to-consumer model, selling from its website. Jay said he’s interested in getting his watches into specific retailers, like golf clubs or fitness clubs, but he doesn’t have a timetable on when that might happen. The company is also exploring pop-up shop events in central Virginia.

While the coronavirus pandemic caused some supply chain disruptions for the company, sales have climbed steadily since the launch, Jay said. He declined to share specifics on how many watches have been sold.

“We started slowly with the friends (and) family distribution, but we now have daily sales and have shipped to over 10 states,” he said.

Best of luck! I’ll be watching to see your success.

It’s about time we get some puns here!