The idea for the complex was conjured more than three years ago.

Julien Patterson and Terri Wesselman are making an $18 million bet, part of which hinges on giving Richmonders something new to do when they head out to the Northern Neck for some time at the river.

They’ve packed the place with activities both inside and out. Indoors there’s a six-screen movie theater, an arcade, bumper cars, climbing walls, a zipline, a high-ropes course, virtual reality games, a restaurant and bar, and an obstacle course maze resembling that of American Ninja Warrior. Outdoors there’s miniature golf, go-karts and batting cages. 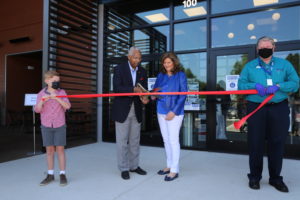 It’s the seventh venture in the Northern Neck for Patterson and Wesselman since 2012. That’s when they moved to the area for semi-retirement after selling their company, Omniplex World Services. They ran the security firm, which was bringing in $120 million annually as of 2012, for 22 years before selling it to Altamont Capital Partners.

The soft launch for Compass was Aug. 28, ahead of its official opening on Labor Day weekend. Patterson said demand was far stronger than expected despite the pandemic, though he would not say how many guests came through the first weekend.

“Opening weekend was fantastic,” he said, adding that they’ve held off on a grand opening to keep crowds under control and maintain sanitation and social distancing. “So many wanted to come in and see it for the first time.”

Admittance is $20-$40 per person, depending on how many attractions guests choose. Some attractions must be booked in advance by large groups, like the obstacle course, which will help control capacity and allow for social distancing. 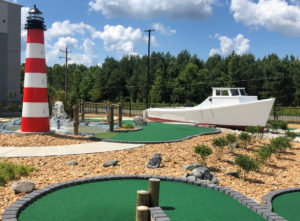 The mini-golf course is one of the complex’s outdoor attractions.

The idea for Compass Entertainment Complex came three and a half years ago, and Patterson and Wesselman said they studied entertainment centers around the country before building what they called a one-of-a-kind entertainment destination. They financed the project themselves.

They see untapped potential in the Northern Neck for entertainment, as the closest movie theater is 60 or 70 miles away. They recognize the rural area with an aging population isn’t Hampton Roads or Fairfax, but said it can still draw visitors from across the state — even in a pandemic.

“There is so much pent up demand in the Northern Neck here for this — it’s incredible,” Wesselman said. “The population here can double from the summer to the non-summer months. Opening in the non-summer months allows us, I think, to be able to control the volume a little easier.”

Ground broke on the project in September 2019, targeting a Memorial Day 2020 launch, and while the building was done then, equipment delays and the pandemic pushed back the grand opening. Equipment like bumper cars and go-karts were delayed months as the pandemic limited manufacturers’ operations.

While it is certainly not ideal to open during a pandemic, Patterson said they never looked back. 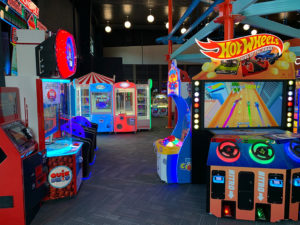 The arcade is one of the indoor features.

“We’ve kept our focus,” Patterson said. “The needs that we’re trying to address here aren’t going to change. Our methodology may adjust for the period that we’re in, our timeline might extend just slightly, but we’ve kept our eye on the target.”

The project has already created 70 to 80 jobs, which is always a goal for Patterson, the former chairman of the Virginia Economic Development Partnership and the Virginia Chamber of Commerce. Wesselman added that the pandemic decimated many entertainment businesses, which meant Compass could hire some highly qualified managers that likely would’ve been employed elsewhere.

The complex is designed to hold 960 guests, under the current limit of 1,000 set by Gov. Ralph Northam, so state restrictions shouldn’t be an issue when social distancing guidelines are enforced.

Patterson and Wesselman said they’re hoping for a post-COVID grand opening in the spring, provided the peak of the pandemic has passed and a vaccine is widely available.

Though the Northern Neck is often lumped in with Hampton Roads, Wesselman said they’re two worlds apart, adding that few others have invested in the Northern Neck. That’s led to a ripple effect that affects far more than commerce. Wesselman said many teachers don’t want to stay in the area because there’s nothing to do. They see the launch of Compass Entertainment Complex as a way to help change that.

“We’re the economic spark for future investment and development by others in this area,” Wesselman said. “That’s what we see in the next five to 10 years. We’ve brought an amenity that’s long overdue here in the Northern Neck.”

I hope it does well; this really in Christ Church as it is central located on on NN between Kilmarnock and Irvington.

an interesting quibble. I don’t think there is an area called “Christ Church” I’ve certainly never heard it in all the time I’ve spent down there. But I wouldn’t have called this Irvington, or Kilmarnock, either. I think it’s technically outside the lines of both.

My guess it that since they live in Irvington, they decided “Irvington”. It seems like a reasonable 50/50 call

Christ Church is a real place.

Congratulations!!! This is much needed in the a Northern Neck to give kids and families a place to go and have a great time. Wishing you much success!!

Congratulations!!! This is a landmark addition for the NN!

They’ve done a nice job with this. I’d wondered who was putting it up, but this couple has really invested a lot in the northern neck