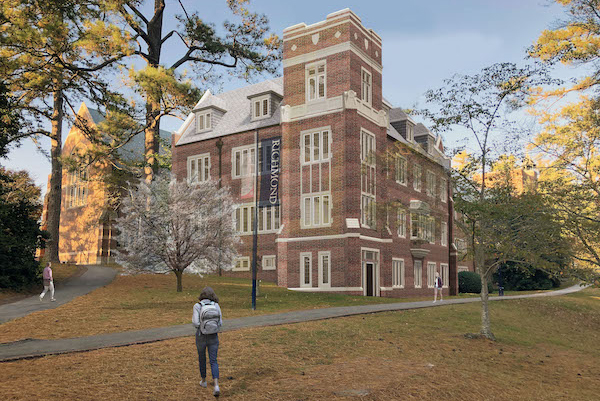 A University of Richmond academic building built the same year World War I erupted is undergoing a $25 million upgrade and expansion that will consolidate departments and free up space for student housing.

Work is underway on the project, which is expected to be completed in fall 2021. It will add 11,500 square feet to the building’s current 27,600 square feet. UR said the 39,100 square feet will better accommodate the resident English and history departments.

Though a renovation has been in the university’s plan for years, more recently it was decided to make space in Ryland Hall for the classical studies and philosophy departments — creating a humanities hub.

“Last summer during a campus-wide space planning study, an ‘aha moment’ occurred when the idea of creating a humanities center was floated,” university spokeswoman Sunni Brown said in an email.

The classical studies and philosophy departments are currently located in North Court. That building’s academic area will be repurposed as residential space. The rest of the building is already used for student housing.

Ryland Hall’s renovation was planned as part of the university’s 2011 Campus Master Plan. The building, which was built in 1914, was last renovated in 1990.

The project architect is Richmond-based Quinn Evans. The contractor is Kjellstrom + Lee, which is also based in the city.

The project also will upgrade the building’s heating and cooling system, its accessibility and resolve air quality issues.